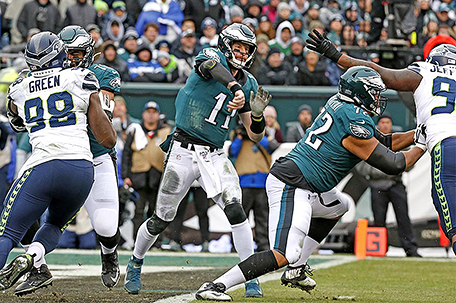 EAST RUTHERFORD, N.J.– If you’re a team trying to clinch a playoff spot on the last game of the season  and you’re playing a team that’s going nowhere but home, the last thing you want to do is give them a chance to play spoiler.

That’s the predicament the Philadelphia Eagles found themselves in during their season finale against a pesky New York Giants squad that showed with a game tying 68-yard touchdown run from running back Saquon Barkley they refused to go quietly.

But in the fourth quarter, the Eagles ended the Giants spoiler hopes and gave their partisans who made the trip to MetLife Stadium something to cheer about by scoring 17 unanswered points in a 34-17 win to clinch their second NFC East title in three years. The fourth-seeded Eagles (9-7) will take on the Seattle Seahawks Sunday night at Lincoln Financial Field.

“They scored and we said we just have to keep going, keep playing,” Eagles head coach Doug Pederson said. “We knew something was going to go our way. We kept trusting each other.  We put some drives together. The defense hung in there. We got a turnover that set up another touchdown all the pieces came together after that.”

The win was especially gratifying to quarterback Carson Wentz, who has spent the last two postseasons on the injured reserved list.

“I’m just grateful for my health, grateful to be with the guys in these meaningful big games,” he said. “The last few weeks our backs have been against the wall. Guys have responded and stepped up and kept making play after play.”

On a day when tight end Zach Ertz was out due to an injury, and when running back Miles Sanders (ankle) and right guard Brandon Brooks (right shoulder) were lost during the course of the game, the Eagles “next man up” philosophy shaped the outcome of the game.  Two of the players who scored touchdowns on Sunday —- running back Boston Scott and tight end Josh Perkins —- started the season on the practice squad.

After Barkley’s electrifying run, the Birds got a 41-yard field goal from kicker Jake Elliott and a pair of touchdowns from Scott that not only put the game away, but gave the Eagles the division title. Scott accounted for 138 yards (54 yards on 19 carries and 4 receptions for 84 yards) from scrimmage and scored three touchdowns.

For Scott, who has been through the ups and downs of being cut and spending most of his season on the practice squad, he said it was matter of staying focused and being ready for his opportunity.

“I know it’s a revolving door,” he said. “You’re always a play away from being called up and being put in that situation.”

Once again, it was the Eagles defense that sparked the team’s final march to victory. On the ensuing possession after Elliott’s go-ahead field goal, the Giants had second down and eight on their own 27-yard-line when quarterback Daniel Jones mishandled the center snap, tried to pick up the ball, but then was hit by Tim Jernigan. Malcolm Jenkins slapped the ball out of Jones hands. The ball was eventually recovered by defensive tackle Fletcher Cox at the Giants two-yard line.

Defensive end Brandon Graham said after Barkley’s touchdown his defensive teammates were even more determined to put the game away.

“We knew that we couldn’t let them stay in this game,” said Graham said. “We knew we had to do something. (After Barkley’s TD run),  I didn’t see nobody pouting. They made a good play, let’s go out here and get a turnover. Our mindset was we knew we were going to win this game. … I loved how everything opened up in the third and fourth quarter.”

One play later, Scott scored the touchdown that put the Eagles up 27-17 with 11:03 left in the game.

The Eagles defense snuffed out any hopes of a Giants comeback when they stopped Barkley for no gain on 4th and 2 from New York’s own 39.  Four plays later, Scott’s two-yard run touchdown put the final nail in the Giants coffin. The final touchdown was set up by a 39-yard screen pass from Wentz to Scott.

The Eagles led 10-3 at the half on a 31-yard field goal by Jake Elliott and on a 24-yard touchdown pass from Wentz to tight end Joshua Perkins. The Giants got a 37-yard field goal from kicker Aldrick Rosas.

During Week 11 of the regular season, the Seahawks defeated the Eagles by a score of 17-9 at the Linc. To see what happens between these two teams now that the stakes are higher, catch the game on Sunday on NBC-10 at 4:30 pm.