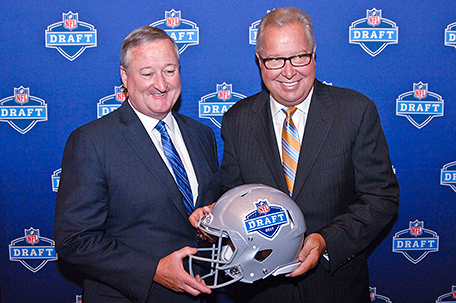 By bringing the 2017 NFL Draft back to Philadelphia, the National Football League brings one of it’s most important rituals back to it’s roots.

On Feb. 8, 1936, in a room in the original Ritz Carlton Hotel in Philadelphia, the Philadelphia Eagles made the first pick in the first-ever National Football League draft.

In April 2017, the eyes of NFL fans will be trained toward Philadelphia once again as some of the nation’s best collegiate athletes come to the Benjamin Franklin Parkway to participate in the 2017 NFL Draft. Players will be bounding up the “Rocky” steps with the Philadelphia Museum of Art as a backdrop for two nights to learn where they’ll be playing football next while an estimated 8.3 million viewers watch them on ESPN.

At a press conference at City Hall last week, Peter O’Reilly, the NFL’s senior Vice President announced that the NFL Draft would become the next city to play host to what it’s calling a “fan experience”. For the last two years, the draft has been held in Chicago and has drawn as many as 225,000 people, O’Reilly said.

Bringing the draft back to its roots is something that the NFL is happy it’s able to do, O’Reilly said. It also helped that the NFL surrounds Philadelphia on all sides, O’Reilly said. From Pittsburgh Steelers fans anxious looking for the next Troy Polomalu to Baltimore Ravens fans looking for the next Ray Lewis, football fans can drive, fly, take the bus, or use any mode of transportation to check out the draft, he said.

“We’re confident that Philadelphia will take the draft to another level,” he said. “This is a football town with a passionate fan base. We’re going to come together to make this a successful draft.”

According to the Philadelphia Convention and Visitor’s Bureau, it could be a stunning success. The city could see $86.4 million in economic impact including $6.8 million in direct state and local taxes.

Eagles owner Jeff Lurie played a big part in bringing the NFL Draft to Philadelphia, O’Reilly said. At owner’s meetings and league events, Lurie talked up the city and what fun it would be to bring the draft back to the area, said Don Smolenski, Eagles president.

While it didn’t appear that the Eagles themselves were going to have a first-round draft pick, something that the trading of starting quarterback Sam Bradford to the Minnesota Vikings took care of, the draft will have enough excitement for everyone, Smolenski said.

“This is an event that showcases all of the league’s 32 teams,” he said. “It’s a special moment for the players and a special time in their lives. Eagles fans will be able to participate and salute their team.”

No one was happier to hear the news than the Eagles fan occupying the Mayor’s Office. His Tweet chiding New Jersey Gov. Chris Christie for being a fan of the hated Dallas Cowboys made then- City Councilman Jim Kenney a popular figure.

Now that he’s the city’s mayor, Kenney was ecstatic about his city’s playing host to yet another spectacular event.

“As a lifelong Eagles fan, I can’t tell you how excited I am,” Kenney said. “The Eagles are great ambassadors for this city and I thank them for bringing this event here. Philadelphia knows how to put on big events.”

The only person who was possibly more excited than Kenney about the NFL Draft returning to the City of Brotherly Love was Eagles great Ron Jaworski. Jaworski, the quarterback of the 1980 team that went to the Super Bowl and lost to the Los Angeles Raiders, spoke directly to the fans.

“What you can expect is an NFL-themed, family friendly event,” he said. “You don’t have to follow all of the draft picks to have fun.”

In addition to the draft itself, which will include members of the NFL Legends Community to help announce selections on the Draft’s second night, the winners of the Walter Payton NFL Man of the Year, named for the Chicago Bears Hall-of-Fame running back and commemorating community service, will be presented.

The 2017 NFL Draft, complete with a first-round pick for your Philadelphia Eagles, will be held from April 27-29.