Back Down Memory Lane 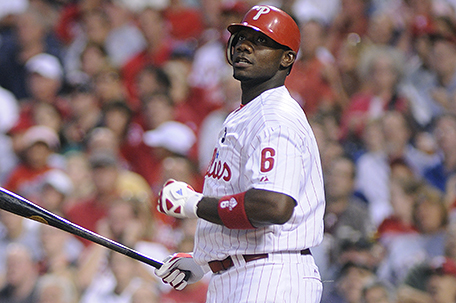 During Ryan Howard Retirement Day at Citizens Bank Park, Phillies fans got the chance to revisit the glory days with ‘The Big Piece.’

As someone who covered the Philadelphia Phillies during their postseason runs that included a World Series title and two National League pennants, there are two things about Ryan Howard that jump out in my memory.

One was a hot summer night back in 2006 when the Phillies played the New York Yankees. Howard hit two home runs and seven RBIs in a 9-7 Phillies loss. Howard had so unnerved the Bronx Bombers that Yankees shortstop (and future Hall of Famer) Derek Jeter said his team had to dig deep to “overcome Howard.”

The potent, dangerous slugger that Howard was the thing that fans celebrated during Ryan Howard Retirement Day this past Sunday during pregame ceremonies at Citizens Bank Park. In festivities prior to the game against the Washington Nationals, Phillies fans got a chance to look back on the accomplishments of the team’s all-time greats.

But to me, the most important thing that Howard’s success did was bring back African American baseball fans whose parents, grandparents and great grandparents had refused to attend Phillies games because of the racism that Jackie Robinson received from the Phillies franchise and the city of Philadelphia when he broke the color-line in 1947.

Another reason many older Black fans pointed to for not coming out to Phillies games was the harsh treatment that Dick Allen, the team’s first Black superstar received during his time with the team. Allen was often pelted with batteries and heard racial slurs by Phillies fans at Connie Mack Stadium and was cast a villain in a fight with a White teammate. He was eventually traded to the Chicago White Sox.

“They used to throw their change down there and it felt like a .22 caliber bullet hit,” Allen said to me in an interview with the Philadelphia Tribune in 2005. “It was very tough back then. … it made it awful tough. I could have played longer. It shortens your career.”

But the success of Howard and Jimmy Rollins, who was the National League’s MVP in 2007, and as well as various initiatives by the team brought more African American fans into the ball park. What Howard was accomplishing, especially during his MVP season in 2006, helped Allen come to terms with his own tough experience in Philadelphia.

“A lot of the adversity has been cleared from the Jackie Robinson days to the Dick Allen days, where those things have subsided and [Howard] can concentrate just doing what he’s doing now,” Allen told me back in 2006. “It’s almost a healing kind of thing; it happened back then unjustly. But it’s setting a tone where it will make it easier for your grandson or my grandson.

“It got around the world, ‘Oh no, we don’t want to be with the Phillies; look what they did to over there to this person and some of them didn’t want to be here.’ That’s the biggest change and the most important change to make players even want to come here. Howard and fellows like that can change all that.”

Allen was quite prophetic — Howard became one of the city’s most beloved superstars and a Phillies legend by the time his career was done.

“Allen was so helpful to me,” Howard said. “We’d have conservations and he would give me tidbits of information to help me to go along and to try to carry the torch a little bit because we know the history of city and the organization. But we were just trying to go out and win. We kept it simple and whatever else came with it, came with it. We wanted to go out and put on a good show for the fans and everybody came out.”

When the Phillies won five straight National League East titles, two National League pennants, and one World Series title in 200, Howard was the most feared and dominant hitter in baseball.

Howard, who also was known as The Big Piece, had the ability to carry the team through tough stretches of the season when the team was winning division titles.

After injuring his Achilles tendon on the last out of the 2011 National League Division series, Howard wasn’t the same player he was during the Phillies playoff years.

Is Howard a Hall-of-Famer?

When it comes to Baseball Hall-of-Fame consideration, I don’t think Howard will get in because of longevity and numbers. But another of way of looking at it would be to take what I call the Gale Sayers approach.

Sayers, who played five years in the more brutal and injury-prone of pro football-only played five year but  was arguably one of the most dominant and exciting players in the game during that time before injuries ended his career.

You could say same thing for Howard who was one of the game’s most feared  sluggers from 2005 to 2011. He was the Rookie of the Year (2005) and the National League MVP and was in the Top Five in the voting five times.

But because baseball and its writers are married to numbers and analytics, I don’t think Howard gets in. He was still one helluva player, however, and a class act.