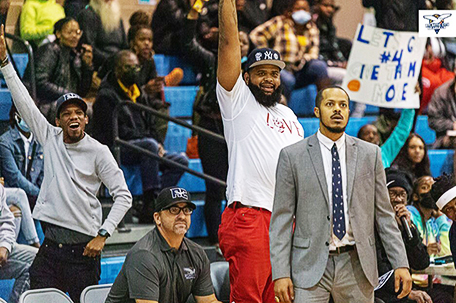 You had to be there to believe it.

Last Saturday night, at the Atlantic City Seagulls’ home opener at Pleasantville Recreation Center, many fans who arrived at the game in the third quarter thought there was something wrong with the scoreboard or some other malfunction.

When the scoreboard should have read 200 points, it kept falling back to double digits, even though the Seagulls (1-1) had scored 201 points. At that moment,  an apology was made to the fans about the error and was told this was an honest mistake.  The scoreboard was wrong, but the Atlantic City Seagulls were leading the basketball game, 201-49.

When the Seagulls hit the 200-mark, the crowd went wild. But early in the fourth quarter, they really went crazy when Marcus Franklin hit back-to-back three pointers within 10 seconds to push the team to 226 points. The Seagulls broke the ABA single-game scoring record of 222 points

Seagulls head coach Valentino Thompson had already told his players earlier he wanted them to score over 200 points. And that’s exactly what they did. They won the game by destroying the Hornell Bulls, 251-69, in front of their happy home crowd.

“We wanted to put on a show for Atlantic City,” Thompson said. “The City hasn’t had a team in a while. Tonight, we showed a lot of energy. We wanted to give the fans a reason to come back to see us. I had told my team I wanted them to score 200 points sometime during the season. I felt that way during our practices. I felt something special might happen and it happened here tonight.”

Before last Saturday night’s game, Thompson was determined to get his first win of the season. Two weeks ago, his team lost a tough battle to the Garden State Warriors, 121-112. Turnovers and lack of rebounds caused them to lose the game. This made Thompson run more practices. The team worked harder to correct their mistakes.

“We got a lot of energy and I see that energy at our practice,” Thompson said. “I think that energy will go a long way. It’s still early in the season and right now we are still trying to find ourselves. I think if we keep on working hard we can become one of the Top 6 teams in the league. I think we will make a lot of noise when playoff time comes around.”

In last Saturday’s game, the Seagulls ran a full-court defense. From start to finish, they double-teamed and other times triple-teamed the opposing shooters. They made it hard for Hornell to move the ball up the court. The Seagulls made 66 steals and 85 rebounds and hit 43 shots from beyond the 3-point line. Leon Daniels, a former Atlantic City High School player, led the Seagulls with 38 points and 32 rebounds. Meanwhile, Juan James knocked down 36 points and Antoine Morgano scored 28 points.

At halftime, the score was 114-31. During the halftime entertainment, the Seagals cheerleaders put on a dance performance; the Seagulls mascot, Gully, was busy entertaining the kids. Evolution, an online casino company, was giving out gifts to lucky Seagulls fans. When the game was over, the Seagulls fans staged a celebration in the middle of the basketball court congratulating the team before leaving the recreation center.

The team’s next home game will be against the New Jersey Knights on November 28 at 4 p.m. at Pleasantville Recreation Center. Next Saturday, they will return to action against the Baltimore Hawks with hopes of picking up their second win of the season.

It’s official: The Atlantic City Seagulls men’s basketball team is back for its first pro season