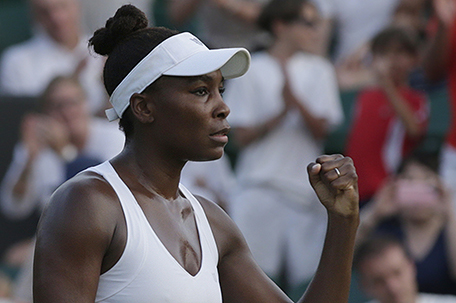 LONDON — Venus Williams is no longer the player she once was, on account of the passage of time and the day-to-day ups and downs of an energy-sapping condition.

At age 35, 21 years removed from her first professional tournament, Williams still possesses a dangerous serve, along with the muscle memory that comes with seven Grand Slam singles titles, five at Wimbledon.

And so while it is her younger sister Serena who is ranked No. 1, has 20 major titles and owns a 23-match Grand Slam winning streak as of Wednesday, the elder Williams is still in the draw at the All England Club, too — and the siblings are closing in on what would be their 26th all-in-the-family matchup on tour.

“She probably comes back here and, you know, I think, she almost feels like this is home,” said David Witt, Venus’ coach. “When you have confidence, you have everything. That’s with any sport. And I guess when she gets here, it’s a confidence thing.”

Two more wins, and the siblings will meet in the fourth round.

“She poses a big threat for me,” Serena said about Venus.

They pulled out of doubles on Tuesday, citing “soreness” for Serena, who wants to focus on her pursuit of a fourth consecutive Grand Slam title.

Also advancing: No. 21 Madison Keys, who finished off a match suspended because of darkness at 2-all in the third set a night earlier, and Sloane Stephens.

A pair of U.S. men moved on, too: No. 17 John Isner and 105th-ranked wild-card entry Denis Kudla, who followed up his victory over No. 28 Pablo Cuevas by getting past 18-year-old Alexander Zverev.

“A few years ago, I was being asked, ‘What happened to U.S.A. tennis?’ And I said, ‘Well, it comes and goes.’ I think there were a lot of younger players coming that showed promise,” the 30-year-old Mattek-Sands said. “Sure enough, I think we have a really strong contingent of American players and it’s really good to see.”

She is halfway to a calendar-year Grand Slam in doubles with Lucie Safarova of the Czech Republic. Serena, meanwhile, is halfway there in singles, and so far this week has a pair of straight-set victories after playing five three-setters at the French Open.

After dismissing Babos on Centre Court — where a small electrical fire in a mechanical room set off alarms once play was done for the day — Serena was able to settle in front of a TV to watch Venus finish off Putintseva.

“I always root for Venus,” Serena said. “She’s been through a lot in her career. She’s really playing well.”

So far at Wimbledon, that is certainly true, including a 6-0, 6-0 victory in the first round.

Against Putintseva, Venus’ 29 winners included seven aces, and she reached 122 mph (197 kph) on a serve in the final game.

Venus last won the grass-court Grand Slam tournament in 2008; three years later, she announced that she has Sjogren’s syndrome, an autoimmune disease that can cause joint pain and fatigue.

Her nearly 2-hour match Wednesday was the last on Court 3, and wrapped up at about 9 p.m., by which point it was much cooler than earlier. The Met Office, Britain’s official weather service, said the temperature reached 35.7 degrees Celsius (about 96 degrees Fahrenheit) at its closest observation site, about 1 degree Celsius (2 degrees Fahrenheit) higher than the previous tournament record, set in 1976.

Spectators fanned themselves in the stands and used everything from hats to umbrellas to towels for shade. A ball boy collapsed during Isner’s match and was taken away on a stretcher. One player, No. 27 Bernard Tomic of Australia, said he felt dizzy during his victory. Others, including Mattek-Sands, wrapped towels filled with ice around their necks during changeovers.

“It’s definitely hot, but nothing crazy. We have played in worse. I think it’s just surprising because it’s happening in England, where it usually doesn’t,” Keys said. “We have played through much worse.”