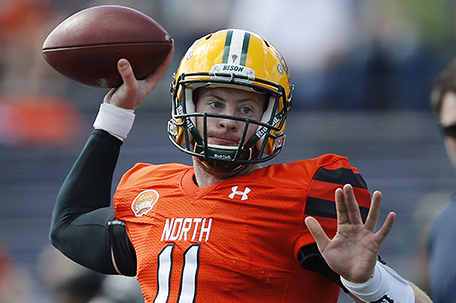 The soap opera that is the Philadelphia Eagles continues.

On this week’s episode of “As The Eagles Turn…”

The Philadelphia Eagles will have drafted either former University of California quarterback Jarrod Goff or former North Dakota State signal caller Carson Wentz with the second pick in the NFL Draft, unless they pull a draft-day surprise and draft running back Ezekiel Elliot from The Ohio State University instead.

(Hey, you never know. It could happen.)

While I don’t know what the Eagles are going to do with that second pick, I do know that Eagles Vice President of Football Operations Howie Roseman really likes Elliott, something that came through in his body language at a press conference a couple of weeks ago.

Another thing that will have probably happened by this weekend is that Sam Bradford and his agent, Tom Condon will have ratcheted up their demands for a trade. For a guy who hasn’t accomplished much in his injury-riddled career, Bradford should be somewhere working out with his receivers and going through head coach Doug Pederson’s playbook.

Bradford hasn’t shown anything in his career that gives him the right to even think he’s somehow a legitimate franchise quarterback. He doesn’t even have a .500 record as a starter and he “ain’t” seen no parts of the playoffs his entire career.

Welcome to 2016, Birds fans. It is going to be another bumpy ride that, barring a miracle, could be another year of missing the postseason and once again figuring out who will be next the great Eagles franchise-saving player from the college ranks.

I don’t know if Wentz or Goff, even if they’re ready to play now, is going to be the guy that will put the Eagles back in the win column. If you believe NBC football analyst Cris Collinsworth, who runs the website Pro Football Focus.com, Goff is more ready to play than Wentz.

“Wentz is going to need some time,” Collinsworth said Wednesday during a live-streaming on Periscope. “There’s no doubt in my mind that if you’re trying to win games next year, Jarrod Goff is going to be light years ahead of where Wentz is.”

Collinsworth said Wentz is a bit more deliberate than Goff and has to work on getting the ball out quickly.  That’s something that he can work on and that’s all about the normal adjustment that Wentz is going to experience as an NFL quarterback.

All that said, the Eagles are going to struggle in Pederson’s first season and so any plans you had for the playoffs are null and void. The Birds are in rebuilding mode and they have other pressing needs in both the draft and in the second wave of free agency in June that they have to fill.

The Eagles still need to shore up their offensive line, especially at the tackle position even with the pending return of left tackle Jason Peters, who suffered from a back injury last season. At 34, you wonder how much Peters has left.

If the Birds cut him, they would be saving $ 7-million and they can go out and draft someone younger. But Roseman and Pederson believe that Peters, an eight-time Pro Bowl, selection, and two-time All-Pro, still has some football left in him.

At some point in the draft, the Eagles would be wise to draft some offensive lineman because as Roseman likes to say, the Birds are always looking to improve the offensive line.

Since they’re apparently not going to draft a top-flight running back like Elliott, there are plenty of decent backs in the later rounds. The Eagles do have a third-round pick.

If Utah running back Devontae Booker is available, the Birds will be getting a running back who can not only run the football but can also catch the ball out of the backfield. He caught 37 passes last season to go along with the 1,261 yards rushing and 11 touchdowns behind a slightly below average offensive line.

Notre Dame’s C.J. Prosise, who gained He averaged 6.6 yards per carry and gained 1,032 yards and 11 touchdowns before injuries cut his season short. He started his college career as a wide receiver, he’s another guy who can catch the ball out of the backfield. Prosise might be available in the third or fourth round.

In any case, the soap opera that is the Philadelphia Eagles right now is going to add a few more actors thanks to the NFL Draft.

For an Eagles fanbase that’s tired of watching the NFL’s post season on TV instead of being at a real, live Super Bowl, it would be a good idea if they were ready for their close-ups now.