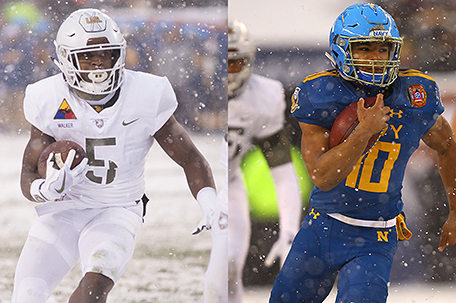 On Saturday, December 8, all eyes will be on Philadelphia as the 119th Army-Navy Game kicks off at Lincoln Financial Field. The annual matchup is one of the nation’s most time-honored traditions and, to students, fans and alumni, it stands as the pinnacle of the historic rivalry between the United States Military Academy (USMA) and the United States Naval Academy (USNA).

As the game returns to Philadelphia for the 88th time in its 119-year history, another complete sellout of 70,000 fans is expected, including more than 50,000 from outside the region. Each time the game is played in Philadelphia, it generates an estimated economic impact of over $30 million for the region.

Through the work of PHL Sports, a business development division of the Philadelphia Convention and Visitors Bureau (PHLCVB) and in partnership with USMA, USNA and the Philadelphia Eagles, the city has played host to America’s Game more than any other city in the U.S. Between its highly accessible location, conveniently situated between West Point, New York and Annapolis, Maryland, and its historic and patriotic reputation, the City of Philadelphia continues to be the ideal Army-Navy Game host.

Last year’s Army-Navy Game broadcast was the rivalry’s highest rated game since 1994 according to CBS, and Philadelphia will remain the game’s home for three of the next four years, through 2022. What’s more, ESPN College GameDay – college football’s longest-running and most-celebrated pregame show – will once again return to Philadelphia, making its fifth appearance at the annual showdown.

“As always, we are honored to welcome the Army-Navy Game, along with its fans, students, alumni and service members, back home to Philadelphia,” said Larry Needle, Executive Director of PHLSports. “As a city famous for its love of sports and history, the importance and value of Army-Navy resonates with our community, and we look forward to welcoming the game back for many years to come.”

Though the game is the crown jewel of Army-Navy Game weekend, it is far from the only opportunity attendees have to showcase their spirit and participate. The 24 hours before kickoff are chock-full of exciting events and activities. Serving as the official kickoff, The Shops at Liberty Place will play host to the official Army-Navy Pep Rally at noon on Friday, December 7. Spectators will get in the spirit and enjoy performances by the Academies’ cheerleaders, pep bands and mascots.

Concurrently, the annual Patriot Games – a two-day, five-event competition between teams of Cadets and the Midshipmen – will be popping up at various Philadelphia landmarks and hotspots, as the Academies battle for a year of bragging rights. The Patriot Games are comprised of: The Rocky Relay (December 7, 8:30am, Philadelphia Museum of Art); the Leadership Reaction Course (December 7, 10:00am, Independence Visitor Center); the Pull-Up Challenge (December 7, noon, The Shops at Liberty Place); Tug-of-War (December 7, 3:00 pm, USS New Jersey Battleship); and the Stadium Obstacle Relay (December 8, 1:15 pm, Lincoln Financial Field).

On game day, fans can enjoy Army-Navy FanFest in the Headhouse Plaza when the gates open at 11am, followed by the highly anticipated March-On, as the Brigade of Midshipmen and Corps of Cadets enter Lincoln Financial Field at Noon in a time-honored procession.

For more information on all Army-Navy Weekend activities, and to purchase hospitality packages, visit PhillyLovesArmyNavy.com.