Are You Ready For Some Football?! 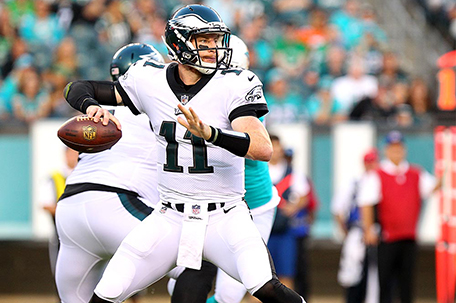 After all the OTAs, off-season acquisitions, draft choices , and training camp, the Philadelphia Eagles will open the 2017 season on the road against a Washington Redskins squad that has beaten the Birds the last five times they’ve met.

Coming into Sunday’s game at Fed Ex Field in Landover, Maryland, the Eagles will definitely have their questions about the course of their 2017 season.

The one sure thing the Eagles have going for them this season is starting quarterback Carson Wentz. At this time last year, Wentz was learning the playbook after being abruptly thrown into the fire after veteran quarterback Sam Bradford was traded to the Minnesota Vikings.

Having survived the ups and down, bumps and bruises of his rookie season, Wentz emerged as a leader on and off the field. He spent most of the off-season in the Eagles practice facility. He was often the first guy to arrive and among the last one to leave.

Wentz’s success will depend upon how much he can rely on a revamped Eagles receiving corps that now includes Alshon Jeffery and Torrey Smith. Both receivers have the ability to stretch the field and come up with the big catch in the red zone.

But the team’s biggest wildcard is third-year receiver Nelson Agholor, who will be the team’s slot receiver now that Jordan Matthews has been sent to the Buffalo Bills.

The talk during OTAs and in training camp is that Agholor has emerged as a new and improved receiver in the Eagles offense. Considering he’s only caught 59 passes for 641 yards and three touchdowns since the team spent a number one draft pick on him, he might want to show that early.

Among rookie receivers, former North Carolina star Mack Hollins could get some time on the field. The 6-4 receiver impressed during the preseason with his size and reach and even got some time with the first team, catching a touchdown pass in the preseason game against the Green Bay Packers.

Meanwhile, the running back position for the Eagles will be by committee. LaGarrette Blount is coming off a monster year with the New England Patriots where scored 18 touchdowns.  Second-year running back Wendell Smallwood  has a lot to prove after a lackluster rookie season. When the Birds  need a running back who can make a big play, Darren Sproles is  still fast and can make you miss.

Eagles head coach Doug Pederson said he is content with having running backs by committee and will utilize them based on the game plan against a particular opponent.

“I think you can have a runner that you kind of hang your hat on,” Pederson said. “Again, I don’t want to just sit here and say that, ‘Darren, you’re obviously a third-down guy,’ or ‘Wendell, you’re a first-, second-, third- down guy,’ because we want to get all these guys involved in the game plan.”

“I think it’s important to what we do,” Blount continued. “If LeGarrette has the hot hand, he continues to carry the ball. If it’s Wendell, it’s Wendell.”

Sunday’s tilt with Washington will also be a test for the Eagles defense, especially the much-maligned secondary. The Birds defensive backfield will be going up against a Redskins passing game led  by quarterback Kirk Cousins, wide receivers Terrelle Pryor and Jamison Crowder, and tight end Jordan Reed.

The biggest acquisition for the Eagles was cornerback Ronald Darby. He has the speed to keep up with any wide receiver, but,  as was shown in the Eagles third preseason game against the Miami Dolphins, Darby can also get beat on the deep ball.

But Eagles safety Malcolm Jenkins said he has confidence in the Birds corners-Darby and Jalen Mills as well as Patrick Robinson and Rasul Douglas. He said Darby was a welcome edition

“(Darby) made us better as a secondary just by adding so more quality competition. He’s made a lot of plays in this league,” said. “Adding him to the room gave us some competition and made us better.”

What will ultimately make the difference for the Eagles defense is putting pressure on the quarterback. The Birds will have a lot depth along the defensive line with guys like defensive tacklesTim Jernigan and Fletcher Cox. Brandon Cox and Vinny Curry will start as the edge rushers. Rookie first-round draft pick Derek Barnett will also be in that rotation as well.

But enough of all this talk.