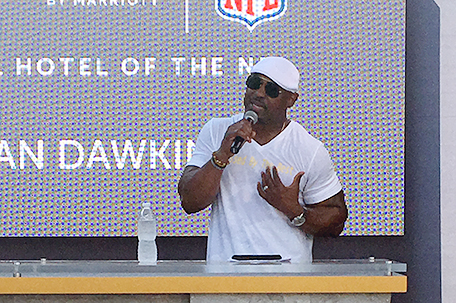 ABOVE PHOTO: NFL Hall of Famer Brian Dawkins speaking to fans at the Courtyard By Marriott stage. (Photo: Denise Clay)

When the Philadelphia Eagles defeated the New England Patriots last year to claim the team’s first Super Bowl victory, it became one of those moments that fans wanted to relive again and again.

When the NFL Experience came to town last Thursday to celebrate Philadelphia’s moment as the Center of the NFL Universe, a group of dedicated fans took the opportunity to do just that.

Despite a blazing heat that took temperatures into the mid 90s, fans sat in the amphitheater at Penn’s Landing to watch the game and cheered as if it had just happened. 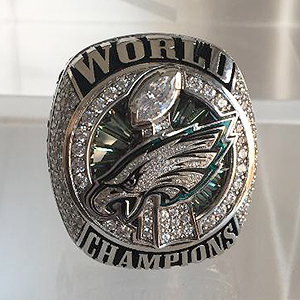 For Eagles fans, it never gets old.

“It’s still exciting,” said Valerie Hearns, a South Jersey native who now lives in Sioux Falls, South Dakota and was in town to see the team’s first game of the season. “I’ve seen [the game] at least five times, although not always all the way through.”

Hundreds came to Penn’s Landing to take in the sights and sounds of the NFL, many of which have returned to Philadelphia for the first time since the NFL Draft was held here in 2017. In addition to the row of helmets representing every NFL team and the chance to take pictures in your team’s favorite uniform, the Super Bowl rings, football related games, and other activities, there were carnival rides including a Ferris wheel, and a merry-go-round.

Fans also heard from Eagles greats such as former running back Brian Westbrook and recently minted Hall-of-Famer Brian Dawkins, who were also signing autographs and taking pictures with fans before heading to Lincoln Financial Field to see the Eagles new Super Bowl Championship banner lifted before the team’s game with the Atlanta Falcons.