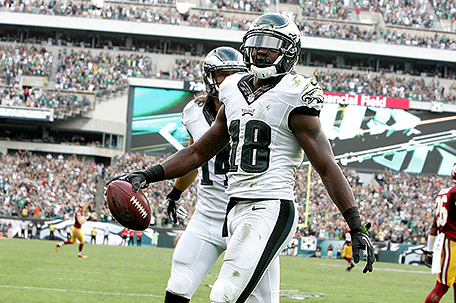 ABOVE PHOTO:  Jeremy Maclin has been the big home run hitter among the Eagles receivers. (Photo by Webster Riddick)

When the Philadelphia Eagles released DeSean Jackson last season, whether or not the Birds could replace Jackson’s production (82 receptions, 1,332 yards, and nine TDs) and ability to stretch the field was the big question.

For the first three games at least, the answer to that question appears to be yes. The Eagles are 3-0 and the passing game, currently ranked second in the league, appears not to have missed a beat without the speedy Jackson, who now plays for Washington.

That’s because Chip Kelly’s offense gives everybody a chance to contribute and makes opposing defenses have to pick their poison.

“It’s all by design in terms of how people decided to defend us,” Kelly said. “Obviously, they packed the front and tried to take away (LeSean) McCoy. But if you’re going to do that, then our wideouts have to step up and play and I thought all those guys really did a good job of that .”

Quarterback Nick Foles leads the league in passing yardage, averages 326 yards passing per game, and has six touchdown passes. Thanks to a gutsy performance behind a patchwork quilt of an offensive line, the former Arizona star found a way to put the Eagles in the win column.

Three of Foles six touchdowns have gone to wide receiver Jeremy Maclin. The former Missouri star leads the team in receptions (16), touchdowns (3) and yards per catch (18.5).

Though he’s not as fast as Jackson, Maclin is a more versatile wideout. He is catching passes running across the middle, on screen passes and on the deep ball. He has scored touchdowns in all three games. By the way, Maclin is no slowpoke and he does run 4.4 40-yard dash.

“Mac is doing a great job every time he’s out there,” Foles said.

In Sunday’s win over Washington, Maclin caught eight passes for 154 yards and one touchdown. He would have had two if not for an illegal block in the back by center Jason Kelce on a screen pass. Kelly said he’s not surprised by Maclin’s performance.

“He’s a big time receiver and that’s what we knew all along,” Kelly said. “We feel like we’re talented at the wide out spot.”

So far, the wideouts haven’t proven Kelly wrong. Rookie Jordan Matthews had a breakout performance against Washington. He caught eight passes for 59 yards and two touchdowns. Both scores were the product of his ability to stretch his 6-3 frame. Tall wide receivers like Matthews and Riley Cooper have given the Eagles weapons the team hasn’t had since Harold Carmichael roamed the gridiron.

But for the first two weeks of the season, the game-breaker in the Eagles’ offense has been Darren Sproles. If it wasn’t for his explosive plays in both running game, the passing game and on special teams, the Birds might be 1-2 instead of 3-0.

Washington was well aware of both Sproles and LeSean McCoy managed to keep them under wraps. While Washington’s defense forced a fumble from Sproles, the rest of the offense gave them fits.

In fact, Foles’ best moment in the season thus far came in the fourth quarter Sunday. With 10:07 left in the game, Foles threw a pass that was ruled an interception by Washington cornerback Bashaud Breeland. As he moved forward in anticipation of Breeland’s run back of the interception, Foles took a hard hit from Washington defensive lineman Chris Baker and wound up on the ground writhing in pain. The hit led to a melee along the sideline, resulting in the ejection of Baker and Eagles offensive tackle Jason Peters.

Meanwhile, the interception was overturned and Foles recovered to lead the Eagles on an eight play, 76-yard drive that would culminate in a 27-yard touchdown pass to Maclin that put the Eagles ahead for good.

What makes Foles play even more remarkable is that he’s had to play without startiing offensive linemen Evan Mathis, Allen Barbre and Kelce due to injury and second-year starter Lane Johnson due to league suspension.

“I said it before about him and I knew it because when I played against him in college, he’s going to stand in there, he’s a tough sucker. He got hit a lot” Kelly said.