Another Opening Of Another Show 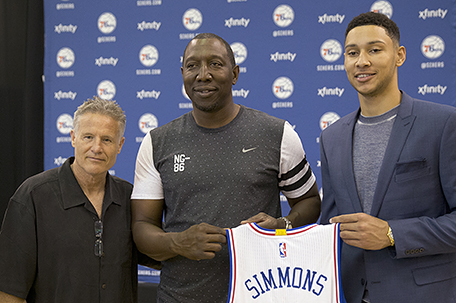 It may not have resulted in a win, but the Philadelphia 76ers opening night effort impressed some people.

If you walked away from the Philadelphia 76ers season-opening 120-115 loss to the Washington Wizards thinking “same ol’ Sixers,” you and I weren’t watching the same game.

I say this because the effort they put in to stay in the game should have shown you that not only are they not the same ole Sixers, but that this group of young talents has s big upside.

In a game that finally featured Joel Embiid, Ben Simmons, Markelle Fultz and Dario Saric on the floor at the same time, you saw a Sixers team that battled back from a couple of double-digit deficits to give themselves at least a fighting chance to win in the closing minutes.

Unfortunately, the closing minutes of the game also showed you that this is still a relatively young team that has to learn how to play with composure and not make stupid mistakes late in the game.  When the Sixers cut the deficit down to two, they had three chances to tie or take the lead, but thanks to a pair of turnovers on some ill-advised passes and a missed three-pointer by J.J. Reddick, the Sixers wound up on the short end of the stick.

With 81 games left in the season starting with Friday’s home-opener against the Boston Celtics, the 76ers still have plenty of room to grow. Over time, they’ll learn how to handle those late-game situations.  That said, you still have to be excited about the potential of this team.

“All we need is maturity and overall just figure how to win,” said Sixers forward Robert Covington. “After one game, we see what we’re capable of. Washington was one of the top teams in the East last year.  For guys who haven’t played much like Ben (Simmons), Markell (Fultz) and Joel (Embiid), You see what they’re capable of.”

“No matter if they’re a young team or not, those are the kind of games you want to take away from them and don’t give them any confidence, but they gave us a great test,” said Wall, who scored 28 points for the Wizards. 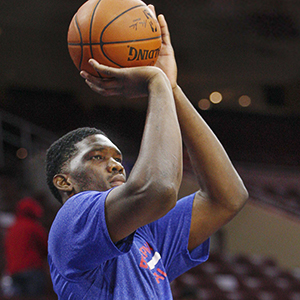 The reason the Sixers were able to push Washington was the size and playmaking ability of Simmons. He scored 18 points, pulled down 10 rebounds and had five assists. Head coach Brett Brown said he was “really, really impressed” with Simmons performance.

Covington was a thorn in the side of the Wizards from three-point range. He scored 29 points and tied a career-high with seven three points.  As a team, shot 42 percent (15-of-35 )from behind the three-point arc. Consistently hitting that three-point shot is going to ultimately open up things in the paint for the 76ers big men.

Speaking of big men, Embiid who was playing in his first game since Jan. 27, scored 18 points on 7-of-15 shooting and pulled down 13 rebounds. While the Sixers coaching staff was looking to limit the former University of Kansas star’s minutes on the court, Embiid wound up playing over 26 minutes, something he was definitely happy about after the game.

“I was excited, I felt good, they listened to me,” Embiid said after the game. “That’s the partnership you’ve got to have and we’ve got to understand each other. They’ve got to listen to what I’ve have to say about that.”

Knowing Embiid’s history of injury, the organization is worried about the possibility of another prolonged stretch of his not being able to play because due to rehabbing an injury to his knee or foot. To be honest, the Sixers are going to have to put their faith divine providence.

In other words, just let him play. Let’s face it, cutting back Embiid’s minutes is not going lessen the risk for injury.  Protecting him like the Faberge egg is not going keep him from getting hurt. The 76ers need to let him play to his full capabilities and allow him to be on the floor as much as possible to help the team.

Part of the 76ers process should be to let Embiid play and dominate while letting the chips fall where they may.

If they allow that, “Trust the process” might stop being a term of derision here in Sixerville.

A good dilemma to have