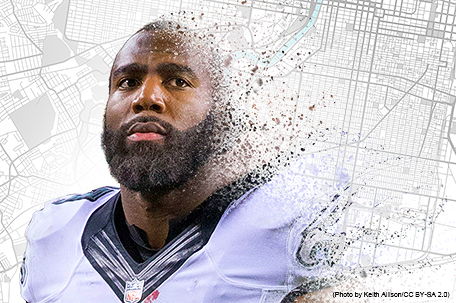 While Safety Malcolm Jenkins is no longer a Philadelphia Eagle, his presence will still be felt here.

When I saw the headline in the Philadelphia Daily News that read, “Malcolm Ex,” referring to the recent departure of Philadelphia Eagles free safety Malcolm Jenkins, I didn’t think it was in good taste.

On one level, I get the catchy play on Jenkins first name and maybe a thinly-veiled reference to Malcolm X. But on another level, I felt that Jenkins deserved a little better from the newspaper, especially considering his contributions to the Eagles and the Philadelphia community both on and off the field.

In an NFL where turning 30 almost always means that your football career is on the back nine, Eagles general manager Howie Roseman refused to pick up the option on Jenkins’s contract and he became a free agent. Neither Jenkins and the team could not come to terms on a new deal and now the safety goes back to the New Orleans Saints, the team that drafted him out of The Ohio State University.

During his time with the Eagles on the field, Jenkins may not have had the blinding ferocity of a Brian Dawkins and his Wolverine persona. But he was the glue that held that Eagles secondary together, even in the years when the team had the most devastating of injuries. Jenkins was a leader in the Birds locker room and the heart and soul of that 2017 Eagles squad that won the franchise’s first Super Bowl.

From all accounts, Jenkins was the quintessential leader by example. He was master of studying film and often worked his butt off on the practice field. Jenkins was a part of that first wave of safeties who played with cornerback skills having started his career with the Saints as a cornerback.

I remember interviewing former Eagles defensive back coach Todd Lyght back in 2014, Jenkins’s first year with the team. From day one, he wanted to make the team better, he said.

“Malcolm Jenkins is a great leader,” Lyght said. “I love what he’s brought to the room. His intelligence, his tenacity, his intensity in practice and I love his leadership qualities because he doesn’t really get on the players, but the way he leads, he turns everything into a competition which elevates everybody’s intensity.”

And that was the thing that defined Jenkins’s career in Philadelphia. In the last two seasons, the Birds experienced injuries that have decimated the team’s secondary. In 2018, three members of Eagles secondary went down to season-ending injuries and he had to work with rookies from the practice squad.

After a devastating 48-7 loss to the Saints in which quarterback Drew Brees carved up the Eagles defense for 363 and four touchdowns, Jenkins put those young players like  Avonte Maddox in the right position and the Birds won five out of their last six games to make the playoffs.  Both Doug Pederson and defensive coordinator Jim Schwartz credited Jenkins’s leadership in leading the defensive effort.

But what made Jenkins time in Philadelphia more meaningful than just his on the field worked was his community activism and willingness to stand against racial injustice in America. Following the lead of former San Francisco 49ers quarterback Colin Kaepernick, who took a knee during the national anthem to protest racism and police brutality during the 2016 season, Jenkins staged his own demonstration by raising his fist during the national anthem.

But Jenkins, along with former Baltimore Ravens wide receiver Anquan Bolden, went beyond protest and started the Players Coalition to fight against racial injustice and racial inequality.

During the off-season, Jenkins and Bolden went around the country and spoke for both Congress and state legislature to fight for such things as bail reform, ending mass incarceration and restoring voting rights to convicted felons who served their time in prison.

Jenkins’s activism didn’t come without controversy. A conflict between Jenkins and former Carolina Panthers’s safety Eric Reid occurred when the Players Coalition decided to accept $90 million from the NFL to help with social justice causes.

Jenkins, to his credit, took the high road and refused to retaliate against Reid and praised him for his work in the community. That told me a lot about him. Sometimes, differences between political and community leaders can have some bitter consequences. Jenkins refused to go down that road.

In the aftermath of the Eagles refusing to visit Donald Trump White House after they won the Super Bowl in 2018, a bunch of reporters gathered around Jenkins locker during the Birds organized team activities.  Instead of his usual conversation with reporters, he held up signs that talked about criminal justice reform.

Jenkins was never afraid to wear his activism on his sleeves even when it was unpopular to do so, and in a city that activists like Paul Robeson and Cecil B. Moore called home, that spoke volumes.

Even during his final season with the Eagles, Jenkins was actively involved in the Philadelphia community. Back in November of 2019, Jenkins, the Players Coalition and rapper Meek Mill organized what turned out to be a very contentious community forum at the Community College of Philadelphia that focused on the selection of the next Philadelphia Police Commissioner.

During the course of that forum, Jenkins faced some tough questions from an audience that was skeptical of him and didn’t quite trust him.  But Jenkins didn’t get confrontational with the audience or make any glowing speeches. Instead, he patiently listened to the community’s concerns and the plethora of stories of police brutality.

Jenkins’s legacy in Philadelphia, unlike any other athlete who has ever played here, stretches beyond his time as an Eagle. We should remember his time in Philly because of his contribution to lifting the African-American community from the despair in racial inequality and injustice.