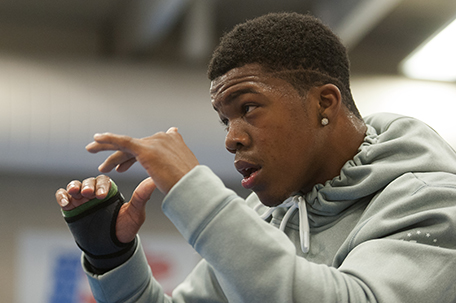 ABOVE PHOTO:  In this Friday, July 15, 2016 photo, Gary Russell works on his technique during an open training session at the U.S. Olympic Training Center in Colorado Springs, Colo. (Ryan Jones/The Gazette via AP)

RIO DE JANEIRO (AP) — Gary Russell cannot explain how in the first Olympic bout of his career he fell deaf to the chants, the horns, the fans stamping their feet on metal bleachers, and heard just one voice through the clutter:

His father bellowing instruction from 50 feet away in the stands.

Gary Antuanne Russell is the last of the four fighting Russells, a boxing bloodline streaming with major amateur and professional accomplishments that included everything but an Olympic victory. With his father hollering from the stands, Russell changed the family fortune, and continued the U.S. team’s stunning roll through the Olympic tournament with a unanimous decision victory on Wednesday.

Once Russell disposed of fellow American Richardson Hitchins, representing Haiti, he became the only fighter through the first 100 bouts of the Rio de Janeiro Games to hop a rail and climb into the stands to find mom and dad.

Dad still had some lessons for his 20-year-old son.

Russell’s father serves as his de facto coach and the pair put together an Olympic blueprint out of their Maryland gym.

The fighter’s father — yes, named Gary — and his wife had six sons and named them all Gary Russell. The only difference comes in the middle names — the Olympic medalist hopeful’s full name is Gary Antuanne Russell.

Gary Antuanne is one of four brothers of the boxing brood to win a Golden Gloves title.

“I took it a notch ahead,” Russell said. “Instead of us mirroring each other on the same level, I made the change, you know?”

The fighting patriarch had a front-row seat in the bleachers and was frequently shown on the big screen yelling toward his son. Russell, who never used the corner stool, did not acknowledge his dad until a quick glance at the end of the second round. His father yelled at Russell to let his hands go, basically launching a more effective offensive attack.

USA Boxing coach Billy Walsh said some fighters can get “carried away” listening to outside voices.

“I did say to him in the corner, ‘Get your head back in this ring, because that’s not going to help you out there. It’s in here that we’re going to be helped,'” he said. “But that’s something we talk about, and it’s not a major issue, but you’ve seen guys get sidetracked before him.”

The U.S. team is anything but sidetracked in Rio de Janeiro.

The Americans are 6-1, winning more fights already than they did at the 2012 London Games when they were shut out for the first time in history. Kansas fighter Nico Hernandez earned at least a bronze with a win on Wednesday.

The 19-year-old Hitchins had hoped he would be part of the American team that would try to snap the streak. Hitchins had emerged from the Brooklyn streets, where he witnessed a murder as a child, and learned how to box and steer clear of trouble at a gritty gym in Flatbush Gardens. But he lost to Russell in their first two bouts leading up the games, including in the U.S. Olympic Trials final.

Both of his parents are from Haiti, so he was eligible to fight for the Caribbean country and become the lone Haitian fighter in the tournament.

Hitchins had Andre Berto, a three-time former welterweight champion, rooting him on back home. Berto, who holds American and Haitian citizenship, had picked up the tab on Hitchins’ travel expenses to Azerbaijan for a qualification tournament. Berto tweeted his support for Hitchins throughout the day.

“Richardson Hutchins hold your head brother u represented the country of Haiti well.. Your future is bright my man, time to get this money,” Berto wrote.

Hitchins wasn’t alone in trying to find another route to the Olympics; U.S. teen and Florida native Teofimo Lopez fought for Honduras when he was squeezed out of a spot on the American roster.

Hitchins, who said he would turn pro, simply had no solution for Russell in any of their three fights. As one final reminder that Russell is the man in this series, he hit Hitchins after the bell.

They made nice after a brief pause for the traditional hug.

“It was bad blood there,” Hitchins said. “But after this, I want him to win. I want him to take the gold back to the United States.”