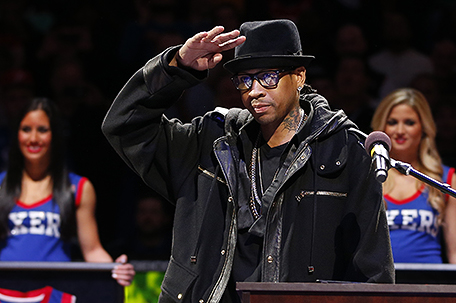 ABOVE PHOTO:  Former 76ers star Allen Iverson addresses his fans, family and the media at his retirement announcement.  (Photo by Webster Riddick)

It’s no surprise to anyone in this town that former 76ers guard Allen Iverson is a finalist for enshrinement in the Basketball Hall of Fame.

Throughout what was a tumultuous career in Philadelphia, Iverson was nothing short of brilliant on the court and deserves to be a first ballot Hall of Famer. Despite being just under 6 feet tall, he was a four-time scoring champ and often scored over men much bigger than him.

He was an 11-time NBA All-Star, led the league in steals three times in his career and was MVP of the NBA All-Star game twice.

Sixers fans will always remember the incredible ride to the 2001 NBA Finals where he played the role of Superman and put a team of role players on his back. Even though the Sixers lost that series, people still talk about the win in Game One where Iverson hit a jumper over a falling Tyronn Lue and then casually walked over the Lakers guard.

I just hope that Hall of Fame voters will base their decision on Iverson’s Hall of Fame admission on his court play and not his off court issues. As I say when it comes to the Hall of Fame of any sport, players should be judged strictly on what they’ve done in their careers during game time, and that alone.

But there’s always a tendency for more than a few voters to look at how a potential Hall of Famer got along with the media or if they were paragons of high moral virtue.  When you consider that KuKlux Klan members, pedophiles and even murderers are in the Halls of Fame of several sports, the irony of Iverson facing judgmental sportswriters is glaring.

Recently, former Philadelphia Eagles wide receiver Terrell Owens, was denied entrance into the Pro Football Hall of Fame not because he didn’t have the stats—he ranks in top 10 all-time in receiving yardage, touchdowns and receptions—but because of his perceived diva-like behavior that rankled coaches and teammates.

Now I’m not going to lie. Owens had issues with teammates and coaches. When he was here in Philly, he did play a role in his own demise with the Eagles by taking shots at quarterback Donovan McNabb (something that you just don’t do.)

But that said, you can’t deny that Owens played like a champion, even if, as his critics put it, he wasn’t necessarily doing it for the team. Playing in a Super Bowl on a broken leg and gaining 100 yards receiving was a remarkable achievement.  You also can’t argue with his numbers. In most cases, ranking in the Top 10 all-time in three different categories at your position makes you a first-ballot Hall-of-Famer.

I think Owens will eventually get into the Hall of Fame just like a number of players who were perceived as troubled during their playing days.

But what he did on the field should have been good enough to get him in this year.

And that’s why I’m concerned that Allen Iverson might meet the same fate.

During his time in Philly, Iverson left it all on the floor. Playing hurt was no big deal to him. He maxed out his talent.

But he did have more of his share of off-the court issues. He didn’t keep himself in as good of shape as he could have, something that might have kept his injuries to a minimum.

And then there was the infamous “We talking ‘bout practice,” speech. While it continues to live as a meme and occasionally shows up on social media thanks to YouTube, it didn’t endear Iverson to the local media.

Iverson was true to himself and truly kept it real. He was a great player on the court and his own man off of it.

So in his case, we need to be talking about first ballot Hall of Famer.