All The Young Phils 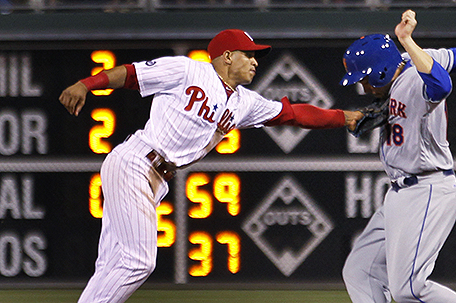 Someday, Philadelphia Phillies fans will play host to playoff baseball. But it probably won’t be this year.

Whether you’re talking the Philadelphia 76ers, the Eagles or the Flyers, the last few years have provided the Philadelphia sports fan with a lot of opportunities to watch their favorite teams go through some serious growing pains.

For the next six months, it’s Phillies fans’ turn to watch the rebuilding process up close, because the Phillies (3-5 at press time) are probably going to lose more games than they win.

With Ryan Howard – the last of the players from a 2008 World Series team that also won two National League Pennants and five straight NL East crowns, now playing in the Atlanta Braves minor league system – the fun part of this rebuilding process will be seeing which of the young players in the Phillies clubhouse will emerge as the team’s stars of the not so distant future.

The first eight games of the season, including last weekend’s series against the Washington Nationals, were a microcosm of the good and bad that a young team searching for its identity can give you. In the Nationals series, you saw more good than bad as the Phillies managed to take two out of a three from a Washington squad looking to contend for the NL East Crown in 2017.

But in the first two games against the New York Mets on Monday and Tuesday, the Phillies showed some of the weaknesses that come from being a young pitching staff, the most notable example of this being a 14-4 shellacking on Tuesday night.

Despite the ups and downs, Howie Kendrick, one of the team’s elder statesmen, is optimistic.

“It is early, but I feel good about the way things have started, especially for me and as a team,” said Kendrick, who had a key RBI double in Sunday’s game against the Nationals. “You want to come into the season feeling good. And I think coming out of spring training, the team as a whole we were all in a good spot, especially offensively with the guys we have and the pitching seems to be doing well.

“That’s the biggest thing, to get all of us playing good together.”

In Sunday’s 4-3 win over the Nationals, the Phillies had a 3-0 lead with two outs in the ninth and looked like they were going to come away with a shutout. Instead, closer Jeanmar Gomez gives up a three-run homer to Nats left fielder and former Phillie Jayson Werth that tied the game.

It would have been easy for the team to hang its collective head, but the Phillies came back from Werth’s stunning homer and won it in the bottom of the ninth with a walk-off single by second baseman Cesar Hernandez that scored Daniel Nava.

“Everybody here is like a family, everybody wants the same thing,” Hernandez said after picking up Gomez, who blew his first save of the season.  “We had a good weekend …the next week is coming,and we have to do the same thing. To us, every game is important like every other game. We wanted to win no matter now.”

The previous night, the Phillies scored a club-record 12-runs in the first and annihilated the Nationals 17-3.  In Friday’s home opener, the Phillies fell into 7-0 against Nationals starting pitcher Max Scherzer. In a situation where they could have quit, they kept fighting and cut to lead to 7-6 before eventually losing the game.

“We were competitive all three games. That’s all I can ask for,” said manager Pete Mackinin. “What I’m most pleased with is the three games combined where we came back from where nobody thought we could win and we had a chance to win (referring to Friday’s 7-6 loss). We won big (Saturday), and we held on to win it (Sunday). That’s a tough ball club. To win two out of three and almost sweep them is huge.”

Even in Friday’s loss to the Nationals, you can see some of the potential in this group of young Phillies. Though he struggled in four innings of work, starting pitcher Vince Velasquez still managed to 10 strikeouts.   You can only imagine what he can when he’s on top of his game.

To be sure, there are some areas the Phils are going to have to improve. For one thing, it would also be nice if guys like Maikel Franco and first baseman Tommy Joseph can be more consistent at the plate.

The Phillies will have plenty of time to figure out who they are and what they can be.