All Isn’t Lost But… 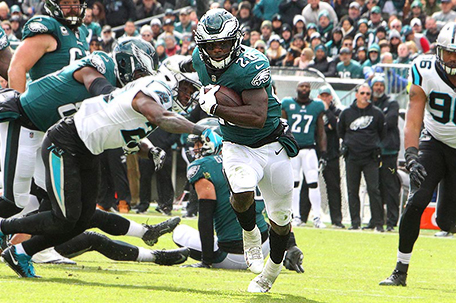 …the Philadelphia Eagles can’t take anyone for granted on their road to the NFC East Title.

A 4-4 record at the halfway mark of the season may be mediocre on its surface, especially for the Philadelphia Eagles, your defending Super Bowl champs.

But when you consider that the other three teams in the NFC East — the first-place Washington Redskins (5-3), the Dallas Cowboys (3-5) and the New York Giants (1-7) — are far from being world beaters, the Eagles are still in a good position to recover from the team’s pedestrian start and win the division.

Starting with Sunday’s night contest at Lincoln Financial Field against a Cowboys squad reeling from a loss to the Tennessee Titans Monday night, the Birds have little margin for error with eight games left in the season.

“You can look down the road a little bit and see – kind of break it up, the next four weeks and the last four weeks and then see exactly what’s in front of you,” Eagles head coach Doug Pederson said during his Wednesday press conference. “But we always focus on a one-week-at-a-time mentality. We talk about winning our division opponent games, and this is one of those that you try to win.”

The Eagles will face divisional opponents in five out of their last eight games of the season. They will also face a pair of potential Super Bowl contenders on the road in the New Orleans Saints (Nov. 18) and the Los Angeles Rams (Dec. 16) and a resurgent Houston Texans squad at home.

To boost an offense that has struggled with third-down conversions at times, the Eagles recently acquired wide receiver Golden Tate from the Detroit Lions for a third-round draft pick. The former Notre Dame star has caught 44 passes for 517 yards and three touchdowns and averages 11.8 yards per catch.

What the Eagles like about Tate is that he is reliable on third down. He is eighth in the NFL on third down receptions with 15 catches for 98 yards. With a receiver corps that already includes Alshon Jeffery, Nelson Agholor, and Zach Ertz, offensive coordinator Mike Groh likes what Tate brings to the table for the Birds’ offense.

“He’s got really good short area quickness, so he can set guys up, keep guys off balance, and like we’ve talked about already today, he can break tackles when he needs to,” Groh said. “He’s got good play strength, lower body strength to be able to plant and run through some arm tackles.”

Tate said he got a chance to learn the Eagles playbook during the bye-week with both Groh and wide receiver coach Gunter Brewer via text messages and Facetime.

“Having the bye helped me to get a head start, so I had a chance to look at this material every single day for a few hours,” Tate told philadelphiaeagles.com. I feel like I’m right there for this week’s game plan and hopefully I’ll keep increasing my load.”

Tate is familiar with the Dallas secondary. He caught eight passes for 132 yards and two touchdowns in the Lions 26-24 loss to the Cowboys in week four.

Not only will the Eagles have Tate contributing to the offense this week, running back Darin Sproles is expected to return the Birds lineup against the Cowboys. If the 35-year-old Sproles is anywhere near the explosive force that he has been throughout his career, it’s going to be a huge day for the Eagles and a long game for the Cowboys and any other team on the Birds’ schedule down the stretch.

Pederson said if Sproles, who is recovering from a hamstring injury, is 100 percent he is going to be “a big part of the game” for the Eagles on Sunday.

Speaking of the Eagles running game, former Notre Dame and Central Bucks North star Josh Adams has been making his case for getting more carries in the Birds’ running game. In the Eagles last game against the Jacksonville Jaguars, Adams gained 61 yards on nine carries while averaging 6.7 yards per carry.

“I like his skill set. He’s got good size, and he’s been running downhill, running behind his pads, and making guys miss,” Groh said.  “For a big guy being able to stick his foot in the ground and make the first one miss or break a tackle, he’s done a good job of that. He’s got good hands out of the backfield, and he’s been on his assignments from a protection standpoint, which is the hardest thing for most rookie backs to do, and he’s been on it, and he’s demonstrated that in practice and earned people’s trust.”

The Eagles and Cowboys kick off on NBC-10 on Sunday night beginning with “Football Night In America” at 7pm.