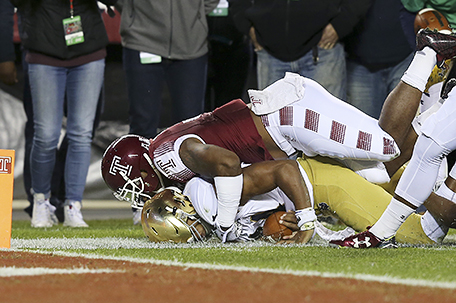 “We just proved to the country that we can play with anybody in the country,” Temple running back Jahad Thomas, said. “We’re on to the next opponent SMU. It’s a conference game and another chance to play AAC opponent.”

While Temple the loss to the Fighting Irish was heartbreaking, a letdown was the least of head coach Matt Rhule’s worries, he said. The team is focused on what’s next…and what’s next right now are the SMU Mustangs.

During their first practice after the loss to Notre Dame, Rhule expressed some concern that his players seemed to be a bit out of sync and still have the malingering effects of the Notre Dame loss.

“They haven’t had the heartbreak of a really disappointing bitter loss in quite some time,” Rhule said. “I just don’t know. Just didn’t feel like it today. Didn’t feel like the energy of alright lets get ready to play. We better get over it quickly.”

The Owls will be facing a 1-7 (0-4 in the American Athletic Conference) Mustangs squad that scores over 28 points per game and is led by quarterback Matt Davis, who has passed for 1,779 yards and thrown 14 touchdown passes with four interceptions. He also leads the team in rushing with 450 yards on the ground. SMU puts up 424 yards per game.

In its last meeting against SMU back in 2013, Temple was on the short end of a 59-49 shootout. Meanwhile, Temple’s defense, led by senior Tyler Matakevich, is averaging just 15.8 points per game. Rhule said SMU is where Temple was two years ago—a young team struggling to win close games.

Temple’s offense, led by quarterback P.J. Walker, should be able to put up points against an SMU defense that is giving up 43 points and 524 yards per game.

Walker has done a masterful job of leading Temple’s offense this season.  He has completed 57 percent of his passes and has thrown 10 touchdown passes and four interceptions. Against Notre Dame last week, he completed 13-of-30 passes for 188 yards with one touchdown and one interception. He also ran for 38 yards.

Ruhle said Walker’s leadership and toughness came through in the Notre Dame game where he stood up to the onslaught of the Fighting Irish defense.

“He took hit after hit,” Rhule said. “I thought he was fearless. A couple of more catches and he has a big-time game. He had some drops for some touchdowns. He just kept playing,  he ran the ball, he threw the ball. He got that big run to get us a first down on that last drive. I just thought he was fantastic.”

Meanwhile, Walker himself has put the Notre Dame game behind him and while the lead up to SMU is nowhere near the hype of playing the Fighting Irish, he’s not looking past the Mustangs.

“It’s not the same buildup, but that’s outside,” Walker said. “We have the mentality that we’re going to play our best football in the same we had last week and the same way we had from week one.”