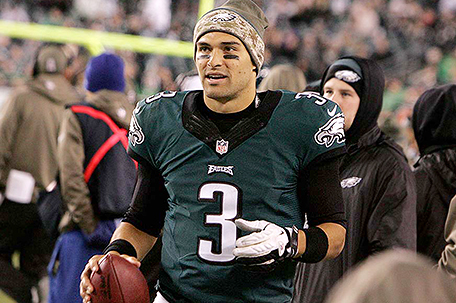 ABOVE PHOTO:  Happy days appear to be here again for Eagles quarterback Mark Sanchez. He came up big against the Carolina Panthers Monday night. His next assignment will be at Lambeau Field in Green Bay.  (Photo by Webster Riddick.)

The competitive portion of Monday Night’s Philadelphia Eagles-Carolina Panthers game ended shortly before halftime mainly because the Panthers were overmatched, undermanned and had absolutely nothing for the Birds.

The Eagles were able to cruise to an easy 45-14 win over the Panthers because they scored in all three phases of the game—offense, defense and special teams-despite having just 37 yards rushing as a team. To be honest, the Birds could have beaten Carolina with one hand tied behind their backs.

Defensively, the Eagles front-seven teed off on Panthers quarterback Cam Newton, sacking him nine times and forcing four turnovers—three interceptions and two fumbles. Connor Barwin had three and a half sacks by himself.

The Birds defense cut off Newton’s running lanes and put pressure on him throughout the game.

“The idea was definitely don’t let him run up the middle, don’t let him go north,” Barwin said. “When he gets north that stride can open up on you. He’s gonna run east-west, we thought that we could run him down.”

On offense, Eagles quarterback Mark Sanchez not only managed the offense well, he picked the Panthers defense apart. Sanchez completed 20-of-371 passes for 330 yards and two touchdown passes.

After some tough times with the New York Jets, Sanchez looked like a guy who was having fun running the Eagles uptempo offense.

The Panthers game was Sanchez’s first start in two years.

“I don’t know. It was just a great night. It was so fun. It was so fun to get back out on the field. I’m very blessed and I thank God for the opportunity. It was really cool,” Sanchez said. “It’s been a while, and I’ve been out of it for a little bit and away from the game. It’s good to get back. It’s good to get back in an environment like this in front of this crowd and in front of all of those guys that work so hard during the week. It’s so fun to watch it pay off.”

His favorite target was rookie wide receiver Jordan Matthews, who had a pretty good game, catching seven passes for 138 yards and two touchdowns. The 6-foot-3 Matthews, a rookie out of Vanderbilt is getting better with every game.

“I think it’s definitely slowing down,” He said. “I think early on you look at the game in a sense that I gotta hurry up and do something good. I gotta go out and make a play.

“But you can’t press it,” Mathews continued. “You can’t rush it, you just gotta let the game come to you and just continue to play with that confidence and never get too far outside the game and that’s what I’m learning… Play fast, but in your mind slow the game.”

Meanwhile, Eagles head coach Chip Kelly wasn’t happy with the small contributations the Eagles made in the running game. Running back LeSean McCoy had just 19 yards on 12 carries.

“We didn’t execute the way we needed to execute in the run game,” Kelly said.

By the end of the second quarter, it was a wrap. Sanchez hit rookie wide receiver Jordan Matthews for a 13-yard touchdown pass and cornerback Bradley Fletcher scored on a 34-yard interception return for a touchdown.

Next week, the Eagles will face one of their biggest tests of the season when they head out to the Midwest to take on a Green Bay Packers squad that destroyed the Chicago Bears in a 55-14 romp at Lambeau Field.

On Sunday night, Packers quarterback Aaron Rogers carved up the Bears defense for 315 yards and six touchdown passes. The former Cal star can not only chuck it from the pocket, but he can also do it on the run.

Something not lost on the Eagles defense.

“You know what you get when you play the Packers. You know you got an explosive offense that can put up points at any time,” said Eagles free safety Malcolm Jenkins. “Rogers is really the only duel threat quarterback that really excels at both scrambling and he’s one of the real good pocket passers in the league. You have to pick your poison.

“If they get him going, it could be a long day for the defense,” he said.

Done: After loss to Carolina, Eagles need to look ahead to next year