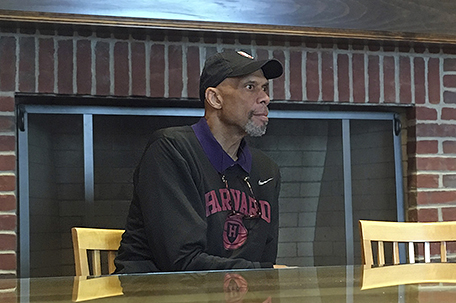 ABOVE PHOTO:  Basketball Hall of Famer Kareem Abdul-Jabbar speaks with reporters on Saturday, Oct. 29, 2016, at Harvard before meeting with the Crimson men’s basketball team in Cambridge, Mass. The NBA Hall of Famer has a new book of essays in which he expresses his concern about the divisive political climate.  (AP Photo/Jimmy Golen)

CAMBRIDGE, Mass. — Kareem Abdul-Jabbar didn’t mention either Donald Trump or Hillary Clinton by name, but the presidential election was on his mind when he came to Harvard on Saturday to talk to the players on the Crimson basketball team.

Nor did the Basketball Hall of Famer need to cite Colin Kaepernick by name when he said current sports stars were “getting their baptism” in social movements.

“I’m glad to see that the younger athletes are concerned and saying something about it. That’s how we solve things,” Abdul-Jabbar told reporters before meeting with the players.

“The Founding Fathers gave us a great method. But it requires us to listen, and to inform others of our ideas in a polite and understanding way. They have a ways to go.”

Wearing a Harvard cap and sweatshirt, Abdul-Jabbar ducked his head to get through the door of the conference room overlooking the school’s 113-year-old football stadium. Soon he would be joined by the players – all of them born long after he scored the last of his NBA record 38,387 points.

Settling into a chair in front of a fireplace, his latest book on the table in front of him, Abdul-Jabbar said he felt compelled to speak out about a political climate with “an emphasis on anger and division.”

“There’s a certain feeling of alarm among segments of our population because the skin color of the country has gotten a little bit darker over the past 20 or 30 years. And that has caused alarm for some people,” he said. “People of color are patriotic Americans in the same way that White people are.”

Abdul-Jabbar said it will be difficult to make progress on the country’s issues when the two sides aren’t listening to each other. “A battle like this is not being waged with facts. That bothers me,” he said. “We should be able to agree on what the facts are.”

A student at UCLA in the late 1960s, Abdul-Jabbar lived through the Civil Rights movement and said he tried to follow the example set by Muhammad Ali, who was stripped of his title for refusing induction into the Vietnam War. Abdul-Jabbar refused to play on the 1968 Olympic basketball team, saying the country didn’t represent him.

Kaepernick made similar comments when he refused to stand for the national anthem before NFL games, a protest that renewed the debate on race.

“It’s not easy, trying to motivate people, especially on something as politically volatile as these issues are. People being shot in the street; it’s a very emotional and a very intense subject,” Abdul-Jabbar said. “I’m sure he’s finding that out. But the fact that he’s persisting with it, I’ve got to give him credit for it.”

Abdul-Jabbar also answered questions about his latest book, “Writings on the Wall; Searching for a New Equality Beyond Black and White,” a series of political essays from the perspective of an athlete, African-American and Muslim. He spoke about the current NBA, which has moved away from centers who played the position like him in favor of 3-point-shooting big men.

“The three-point shot isn’t the answer to everything,” he said. “Everybody thought that small ball was going to dominate. You saw what happened to Golden State when they lost Andrew Bogut: They couldn’t compete. So big guys still have a prominence in the game, and a place in the game that has not been totally eliminated.”

Abdul-Jabbar said he never regretted finishing college,  nor was he tempted by a reported $1 million offer to join the Harlem Globetrotters. He encouraged college athletes — not just at Harvard, but even at more traditional basketball powers — to spend more time in school so they could learn the game.

It wasn’t Abdul-Jabbar’s first trip to the Ivy League school on the Charles River. In 1972, already an NBA champion, he attended Harvard summer school to learn Arabic so he could learn more about his Muslim faith.

“It was a tough semester for me, but I learned it,” he said, reporting that he got an A.

With former Celtics Satch Sanders and M.L. Carr sitting in the back of the room, Abdul-Jabbar said the highlight of his career was beating the Celtics in Boston in the 1985 NBA Finals. At the time, the Lakers had never beaten the Celtics for the championship.

Asked where he would rank his performance in the movie Airplane! among his accomplishments, Abdul-Jabbar’s competitive spirit emerged.

“Airplane! has done better than any movie that Shaquille (O’Neal) has made,” he said. “I’ll leave it at that.”

Building a Ph+ CML game plan: Kareem Abdul-Jabbar explains how he manages his leukemia by working with his doctor

Whassup Partner?!Or… how the NBA and NFL Lockouts have shown just how much players and owners really need each other