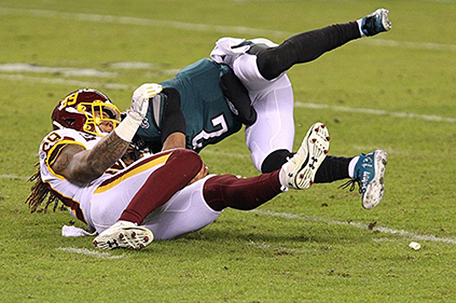 While he didn’t play badly in his four games as a starter, Philadelphia Eagles quarterback Jalen Hurts didn’t impress the team’s brass enough to make them forget Carson Wentz.

Sportswriters and fans alike have been observing Jalen Hurts’ four-and-a-half game stint as the Philadelphia Eagles starting quarterback to see if he was a true upgrade to Carson Wentz, whose season wasn’t doing so well.

For the record, Hurts was 1-3 as a starter. He had six touchdown passes, four interceptions and completed just 52% of his passes. He also had three rushing touchdowns including two in the season finale against the Washington Football Team.

In the 20-14 loss to Washington, Hurts struggled in the passing game, completing just 7-of-20 passes for 35 yards, but he kept the Eagles in the game by scoring a pair of rushing touchdowns before he was inexplicably pulled for longtime backup Nate Sudfeld, a move that made people scratch their heads and had some NFL observers accusing Eagles head coach Doug Pederson of tanking the game.

(It definitely didn’t sit well with the New York Giants, who saw their playoff hopes go up in smoke.)

But while that move made no sense as from a competition standpoint, the move told me that the current Eagles coaching staff is either undecided or not willing to commit to Hurts as their starting quarterback moving forward, even if the team trades Wentz, whose relationship with Pederson has soured.

His statistics notwithstanding, I saw some good things from Hurts in those five games. His decision-making in the pocket wasn’t bad. When receivers were covered, he made plays running the football or he simply threw it away when there was nothing there. Hurts has a strong arm and quick feet. I also liked his competitive fire.

The best game he played during his stretch was in the win over the heavily favored New Orleans, who had the NFL’s No. 1 defense.  In that game, he completed 17-of-30 passes for 167-yards with one touchdown while gaining 106 yards on the ground. Hurts kept the Saints defense off-balance with his ability to run the ball.

In losses to the Arizona Cardinals and the Dallas Cowboys, Hurts passed for over 300 yards, proving that he can throw it. But in the second half of both games, he didn’t do enough to win those games. In the loss to the Cowboys, Hurts threw a costly fourth-quarter interception in the end zone that ended the Eagles’ hope for a comeback in that game.

Then there was Sunday’s eyebrow-raising debacle in which Hurts was benched despite making enough plays to keep the Eagles in the game and putting them in position to win it. After getting stopped on a questionable fourth and goal call instead of kicking the game-tying field goal, Pederson’s decision to take Hurts out of the game for Sudfeld told me that he doesn’t see Hurts as the franchise quarterback moving forward.

If Pederson was really interested in  Hurts’ development as a quarterback, he would have done everything to put Hurts and the Eagles in a position to win the game. If anything else, Pederson and the offensive coaches needed to give Hurts, who was more than eager to do it, the opportunity to bring the Eagles back in the game against a team trying to clinch a playoff berth.

Win or lose, it would have been a valuable experience for a quarterback like Hurts who was starting his fourth game as a pro. There was no reason to take any more looks at Sudfeld, who has been here for four years and has shown that he’s nothing more than a career backup.

It was also a disservice to his Eagles teammates who were willing to fight with him. You can see Hurts’ frustration on the sideline when a TV camera spotted him saying, “That’s not right.”

When teams commit to a young quarterback, they will do everything to put him in a position to win the game. You saw this when the Baltimore Ravens committed to the raw talent of Lamar Jackson and you also saw that here in Philadelphia when the organization invested its millions and put Wentz in every competitive situation to develop as a quarterback.

Not allowing Hurts to finish the game against Washington makes me think that they are not committed to Hurts long term. I believe that Hurts is capable of being a starting quarterback in the NFL.

I’m not so sure he’ll get that chance with the Eagles.