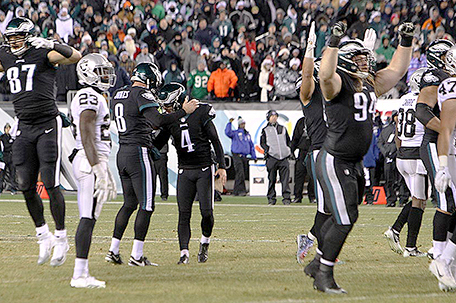 In 2017, Philadelphia sports fans got to do something they’re not really good at. They got to see their ‘sports team glass’ as half-full.

In Philadelphia, 2017 might be remembered as one of unbridled optimism for a couple of pro sports teams looking to make their mark in 2018.

If you said at the beginning of the 2017 season that the Philadelphia Eagles would be the team with the best record in the NFC and have homefield advantage throughout the playoffs, you’d have probably raised more than a few eyebrows.

The reason why the NFC’s Road to the Super Bowl is coming through Philadelphia can be credited to a few critical moves by the Eagles front office and a determined, focused, second-year quarterback in Carson Wentz.

Howie Roseman, the Eagles vice-president for football operations, put together a solid combination of free-agent signings, draft picks, and a stunning in-season trade. Free agents like wide receiver Alshon Jeffery and defensive lineman Tim Jernigan, draft picks like Rasul Douglas and running back Jay Ajayi, whom the Eagles got in a trade from the Miami Dolphins — have all made a difference in the Birds getting homefield throughout the playoffs.

But Wentz was the leader of the band. The second-year signal caller passed for 3,296 yards with 33 touchdown passes (seven interceptions) while completing 60 percent of his passes. He had a 101.9 passer rating.

But the optimism of a Super Bowl run has been tempered some now that Wentz is done for the season thanks to an ACL torn in the win over the Los Angeles Rams.  The calendar year ended with three weeks of lackluster football on both sides of the football and the perception that backup quarterback Nick Foles makes the Eagles a vulnerable No. 1 seed.

The Eagles will begin their run for the Super Bowl on Jan. 13 when they will take on either the Atlanta Falcons or the winner of the New Orleans-Carolina Panthers Wild Card Playoff game.

Across the street from Lincoln Financial Field at the Wells Fargo Center, 2017 ended with fans being excited about the Philadelphia 76ers. Some fans and more than a few local media people predicted that the young Sixers along with free agents like J.J. Reddick might make a run in the playoffs.

Rookie point guard Ben Simmons has been wowing fans with his ability to fill the stat sheets. He can get to the basket and he’s good at getting his teammates involved.

Meanwhile, center Joel Embiid appears to be on his way on to NBA super stardom if he can stay on the court. He is averaging 23.9 points and 10.9 rebounds per game. The good news is that spending more time on the court. He is averaging 31 minutes per game. The not-so-good news about Embiid is that he is still on a minutes restriction and he hasn’t played in back-to-back games this season.

During 2017, the Sixers had streaks of brilliance and times when they have looked awful. The last half of 2017 showed that the young 76ers need to learn how to hang onto large leads. Despite their ups and downs, the Sixers have given fans a new hope and something to cheer about at the Wells Fargo Center.

On the national front, the sports year included the New England Patriots overcoming a 28-3 deficit  to defeat the Atlanta Falcons in the first overtime game in the history of the Super Bowl.  While Patriots quarterback Tom Brady deservedly received all the accolades for pulling off a monumental comeback, it was a seen as a horrible collapse for a Falcons team that had several chances to put the game away.

Unfortunately for Mississippi State, it was Southeastern Conference rival, the University of South Carolina that walked away with the national championship. Led by former Temple coach and Dobbins Tech star Dawn Staley, South Carolina gave the Olympian the national title as a coach that eluded her as a player at Virginia.

In winning the national championship, Staley’s legend as a Philadelphia basketball icon was kicked up a notch. She came home to a triumphant homecoming in North Philadelphia during South Carolina’s game against Temple last December.

The city honored Staley by renaming the section of Diamond Street between 23rd Street and 25th Street where she grew up “Dawn Staley Lane.”.

Colin Kaepernick will probably never throw another pass as an NFL quarterback, but in taking a knee to take a stand against police brutality and for criminal justice reforms is bigger than anything he could accomplish in pro football.

When Kaepernick first took a knee in 2016, it spurred other players to get involved. One of the most notable players to take up the mantle for social justice was Eagles safety, Malcolm Jenkins.

The former Ohio State star took Kaepernick’s concerns for criminal justice reform by testifying before Congress and talking to the people responsible for making the laws that often discriminates African-Americans.

Meanwhile, the owners of the league’s teams refused to sign Kaepernick because of his protests even though they could have used his services.  As teams like the Miami Dolphins, Green Bay Packers and the Houston Texans were losing starting quarterbacks, those teams allowed themselves to have subpar seasons rather than bring Kaepernick in to help their teams.

Kaepernick and his lawyer filed a grievance against the league for collusion. While that may be hard to prove in court, it is interesting that there wasn’t a team that could have used his services.  If there was a possible smoking gun or some evidence that there was a collusion, it was when San Francisco 49ers defensive back Eric Reid said the owners refused to include Kaepernick in the discussions with the Players Coalition.

That ultimately led to the NFL owner offering nearly $100 million to the Players’ Coalition that would support social justice. That also led to split in the Players Coalition because players like Reid and reportedly Kaepernick felt that Jenkins and others misled them and that thing amounted to a sellout.

Meanwhile, significant numbers of Black fans refused to watch the games until somebody in the league signed Kaepernick.  The NFL’s television ratings went down and one of its sponsors, Papa John’s Pizza, experienced a decline in sales.

The Golden State Warriors took back the NBA  crown from the Cleveland Cavaliers by knocking off them off in five games.

The last half of 2017 will be notable for the number of NBA players who changed locations. Carmelo Anthony left the New York Knicks for the Oklahoma City Thunder.  Paul George was traded to the Thunder from the Indiana Pacers  as well.

The Cavaliers traded point guard Kyrie Irving to the Boston Celtics for Isiah Thomas. The Celtics made the trade in hopes that they upset the Cavaliers stranglehold on the Eastern Conference.

Chris Paul went from the Los Angeles Clippers to join James Harden and the Houston Rockets. For the all the personnel moves by various teams, the Golden State Warriors are still the team to beat in the NBA. 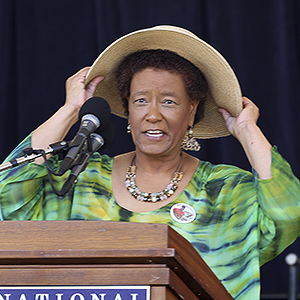 Claire Smith speaks during her induction into the National Baseball Hall of Fame in Cooperstown, N.Y. Smith is the first woman to win the J.G. Taylor Spink Award for meritorious contributions to baseball writing, joining other sportswriters in the writers wing of the Hall. Smith is wearing a hat in honor of late National League executive Katy Feeney, daughter of former National League president Chub Feeney. She was well-known for wearing a variety of hats in postseason. (AP Photo/Reed Saxon)

Claire Smith and the Baseball Hall of Fame

Former Philadelphia Inquirer sports writer and editor became not only the first African-American sports writer, but the first woman to make it to the J.G. Taylor Spink wing of the Baseball Hall of Fame, the section reserved for Sports Writers.

Smith had to endure all the slings and arrows of being one of the first women to go in the clubhouses and locker rooms. Her perseverance broke down barriers for women in sports journalism.

Houston Wins the World Series in the midst of a Storm

In the midst of the devastation of Hurricane Harvey, the city of Houston got some relief from its sports stars. First, Houston Texans defensive end J.J. Watt contributed millions for hurricane relief. On the field, the Houston Astros won the franchises first World Series in a seven-game thriller over the Los Angeles Dodgers

In a fight that was more of a sideshow spectacle than a great fight, Floyd Mayweather came out of retirement to fight UFC champion, Colin McGregor.  The fight will be remembered for its prefight hype and trash talk than the actual fight itself. Mayweather won with a TKO in the 10th round.

The hype of the Mayweather-McGregor fight obscured the matches that really were good.  Andre Ward’s spectacular eighth-round knockout of Sergei Kovalev with mostly body shots.   The heavyweight championship fight between Anthony Joshua and Wladimir Klitschko drew 90, 000 fans at Wembley Stadium was arguably the Fight of the Year.   Both fighters hit the canvas, but it was Joshua who was the last man standing in the 11th round after he finished off Klitschko.

Perhaps the best fight of 2017 involving two equally talented champions was the Draw in the Desert between Gennady “Triple G” Golovkin and Canelo Alvarez for the world unified middleweight championship.  The two will fight again in May of 2018 mainly because of the lingering argument as to won their last fight last September.

And we’ll all be watching.