A Tale Of Two Halves 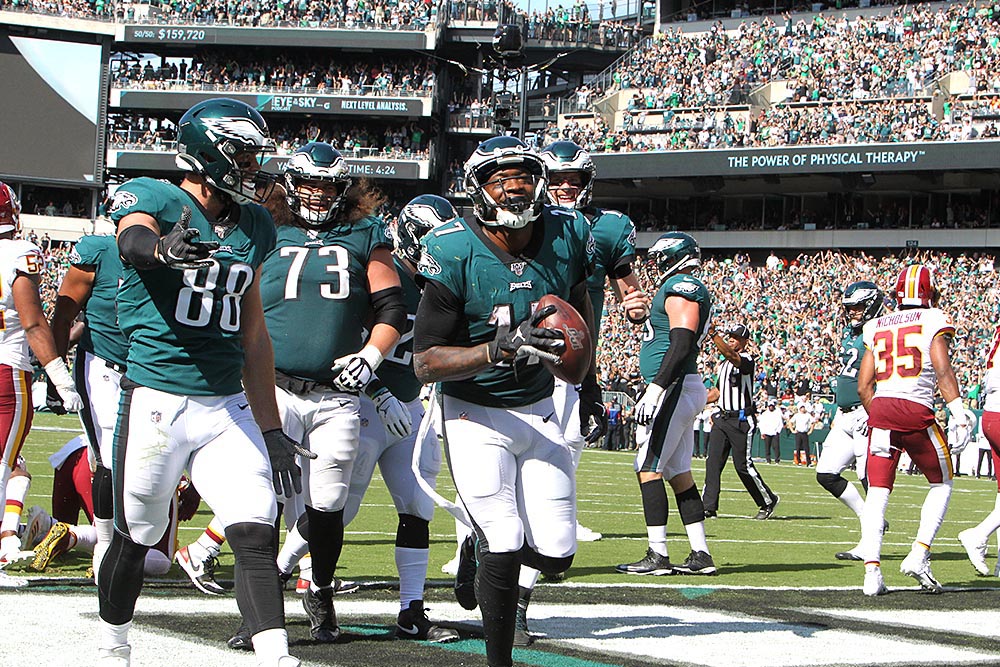 The Philadephia Eagles season opener started slow, but when wide receiver DeSean Jackson got going, it picked up steam quickly.

For the Philadelphia Sunday Sun.

For the first 30 minutes of the Philadelphia Eagles season opener against the Washington Redskins, there wasn’t much to cheer about for Birds fans.

The Eagles fell behind 17-0 early in the second quarter and couldn’t get out of the way of themselves on either side of the football. They were in desperate need of a spark to get them going as fans showered them with boos.

But midway through the second quarter, the team found that spark thanks to a couple of familiar faces.

Quarterback Carson Wentz and wide receiver DeSean Jackson connected for a 51-yard touchdown pass that sparked a 32-10 scoring spurt and a day that started with boos ended with a 32-27 win over the Redskins in front of a sellout crowd at Lincoln Financial Field.

Though Wentz spread the ball around to all of his receivers throughout the game, it was his tosses to Jackson, especially that first long bomb, that got the Birds going offensively after the team fell into that 17-0 hole.

“It was a foot race between DeSean and their corner and DeSean made them pay,” Wentz said. “Obviously, it gave this offense, it gave the stadium, it gave the defense a spark. To be able to able to do that on third down was huge for us.”

Wentz targeted Jackson 10 times and hit him eight for 154 yards and two touchdowns. It was Wentz’s second connection from 53-yards put the Eagles on top for good.

“It was a lot of great things for me in the playbook for me this week,” Jackson said. “You never really know how that is going to pan out when the game comes  so I just stayed calm and collected any time my number was called and just made the most of my opportunities.”

What Jackson brings to the Eagles passing game was definitely on display in the win over Washington. It also opened things up for pass receivers like Alshon Jeffery who caught five passes for 49 yards and one touchdown.

“With his speed, it might get a little off coverage from time-to-time, so [we] take advantage of that, too,” Head Coach Doug Pederson said. “He fits in well with what we’re doing. It obviously freed up Alshon and something things (Nelson Agholor) did and even Zach Ertz and Dallas Goedert. (Jackson’s speed) is good to have.”

What Wentz really like about Jackson was the energy he brought to the team. From the moment, the Birds came on the field, Jackson fire up his teammates and fired up the crowd. At one point, Jackson was a bit too emotional and wound up with a drive-killing personal foul penalty for a scuffle he had with a Redskins receiver.

But when the Eagles were down by three scores, it was his fire on that first touchdown pass that ultimately got the team going.

For Jackson himself, it was about being back in Philadelphia.  During pre-game introductions, Jackson got one of the loudest cheers. After he did his post-game interviews, a few fans hanging outside the locker room got to pose for pictures with the former Cal star.  One fan, in passing, said,”Welcome back, DeSean.”

“It was very exciting and a lot of emotion,” Jackson said. “The past 48 hours (before the game) have been racing for me. Trying to keep my calm, my jitters and anxieties have been a roller coaster for me. I am that it is over with the first game. We came out and started slow, but not one moment in that game I didn’t think we were going to come out and win that game.”

Next Sunday night, the Eagles will attempt to continue their winning ways when they play the Atlanta Falcons at Mercedes Benz Stadium in Atlanta. Game time is 8:20pm and the game can be seen on NBC-10, starting with “Football Night In America” at 7pm.