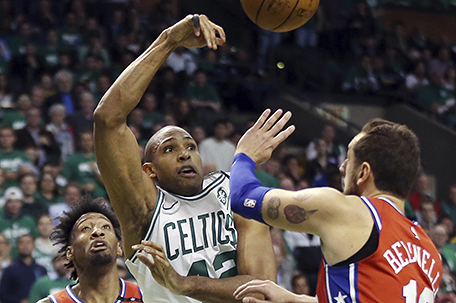 ABOVE PHOTO:  Boston Celtics forward Al Horford (42) passes the ball against the defense of Philadelphia 76ers forward Robert Covington (33) and guard Marco Belinelli (18) in the second half of Game 1 of an NBA basketball second-round playoff series, Monday, April 30, 2018, in Boston. The Celtics won 117-101. (AP Photo/Elise Amendola)

While there’s no Larry Bird or Julius Erving, the Philadelphia 76ers and Boston Celtics rivalry is back…

Part of the experience of watching a young NBA team on the rise is seeing how they fight through adversity in the postseason.

Or, put another way, it’s about, dare I say, trusting the process.

After a tough 117-101 loss to the Boston Celtics in Game 1 of the Eastern Conference semi-final, the young Philadelphia 76ers find themselves going through the growing pains of having to bounce back after a loss in a playoff series.

Coming into Game 3 at the Wells Fargo Center Saturday night, the Sixers will either be trying to dig out of a 2-0 hole or trying to take a 2-1 lead in the series should they win Game 2.

Either way, it’s yet another opportunity for Philly sports fans to break out the city’s mostly overused cliché, a cliché that’s gotten the Sixers through the playoffs.

Among the things that have worked for the 76ers so far is the team’s ability to hit the three-point bucket. That’s how they overwhelmed the Miami Heat in five games, and of the teams left in the playoffs, the Sixers are leading in three-point percentage at 41 percent.

In Monday night’s loss to the Celtics, the three-point well went uncharacteristically dry for the Sixers. Despite having a lot of open opportunities from behind the arc, three-point buckets just didn’t fall for them. The Sixers shot just 19 percent from the three-point range, hitting only five of 26 shots.

“I think schematically Boston is always aware of the three-point shot,” Sixers head coach Brett Brown said. “In some ways they seem quite okay to let Joel Embiid get 40 and you know they’re very mindful of the perimeter. … The threes we took (In game one), you take and then some.”

Sixers point guard Ben Simmons, who committed seven of the Sixers 12 turnovers, said the five-day layoff between series may have been a factor for the Sixers lackluster performance in Game 1. The team has to get better in every facet of its game for the rest of this series.

“We have the time to correct our mistakes,” Simmons said. “We know what our mistakes are and that’s the frustrating part. But obviously those few days off weren’t the best for us. But you know I think it’s good that we took a loss now rather than later.”

Other end of the court in Game 1, the Sixers simply couldn’t stop the Celtics from getting good looks at the basket. Boston’s trio of Al Horford, Jayson Tatum, and Terry Rozier combined to score 83 points.

The Celtics basically did to the Sixers what they did to Miami in the previous series. For the rest of the series, the Sixers are going to have to work harder on the defensive end. That was something Embiid talked about as the team prepared for Game 2.

“Defensively, we didn’t stick to the game plan, we didn’t guard our own man,” said Embiid, who scored 31 points and pulled down 13 rebounds in Game 1. “It was a lot of times when we were overhelping, especially me.”

Embiid said the Celtics were getting too many open looks on the pick and roll and that’s something that the usually defensive-minded Sixers have to work on throughout the series.

This series between the Sixers and the Celtics has fans harkening back to the days when greats like Larry Bird, Kevin McHale, Julius Erving and Moses Malone roamed the courts. It’s making millennial Sixers fans scan YouTube for video of Bill Russell and Wilt Chamberlain.

They’re even finding out that Charles Barkley is more than just the comic relief for TNT’s NBA coverage.

Because of the historic rivalry between the two teams, this series has the potential to give a new generation of Sixers and Celtics fans something to look forward to.

The league in general, and the Eastern Conference in particular, could really benefit from that.