A pro basketball flashback for Black History Month: An interview with Wilt Chamberlain 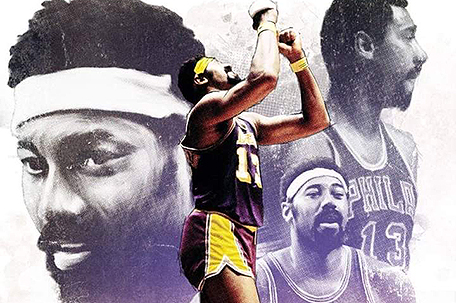 {This article was originally published in the Philadelphia Sunday SUN, May 1998 }

In one of the most significant debates known to mankind, there have been many arguments over who is the greatest player in NBA history.

Right now, it’s safe to say people will always have different opinions about which NBA player is the greatest. In NBA surveys, this debate is a tough one to settle. While many people may feel Michael Jordan belongs on the top of that list, there are basketball experts who strongly feel Wilt Chamberlain is the greatest NBA player to ever step on a basketball court.

In an exclusive interview that took place at the Pennsylvania Convention Center on May 31, 1998, this reporter was able to sit down with the legendary Hall-of-Famer. Fans even had the opportunity to meet Chamberlain. who  shook hands with them. He left his mark in a place that appreciated his appearance.

During this 30-minute interview,  Chamberlain was happy to answer five top questions.. For Chamberlain, who flew back to his home in Los Angelesafterwards, it would be his last newspaper interview in Philadelphia. He passed away one year later on October 12, 1999 of heart failure.

NK:  How about those 100 points you scored in one game. What was it like to score all those points in that game?

WC: That was something that just happened. That 100-point game was significant to a lot of people. I remember more about that 100-point game than anything else I have done. A lot of things happened in that game. I probably would have scored 150 points if they weren’t trying so hard to keep me from scoring more points. The N.Y. Knicks didn’t care about winning the game. All they cared about was stopping me on the court. Not one basket was an easy basket.

NK: How did it start for you, how did you grow up to be a superstar basketball player?

NK:  What’s the difference between today’s players and the players back in your day?

WC: We didn’t have the incentives that players have today. Every little kid in the world from the time he’s five-years old knows about Michael Jordan. They even know about the millions and millions of dollars that Michael Jordan and other players get playing the sport. Back in my day, there was no money in sports as we saw it. There wasn’t money like that. During that time, money was never a factor. Today is a different era. Today, you can’t begin to come close to comparing today’s players to us. First of all, we didn’t have TV exposure. As a matter of fact we didn’t have any kind of exposure. We just had the gift of playing basketball. Today is different. Like back in our day, all you made was between $4,000 and $5,000. We played because we loved the game. Otherwise, we could’ve went to our regular jobs and made $10,000 to $12,000 which is twice more than we made in the NBA.

NK: What inspiration did you and other players have while growing up in Philly?

WC: The only inspiration we had were admiring guys like Jackie Moore and Harold Leer. Those were the guys who played before us. We were just hoping one day to be half as good as they were. We all had dreams that one day we would play for Overbrook High School. That’s why it’s good when kids have dreams today. However, dreams today are always built around so much hoopla. Today, they can see players like Michael Jordan. But back in our day, we didn’t have anything or anyone to inspire us in that way.

NK: Number 13 is my lucky number. I know you wore #13 while playing in the NBA. Were you concerned about the superstition behind the number?

Since Chamberlain’s passing, he became the first player in NBA history to be honored with two postage stamps. Former sports writer Donald Hunt ran a campaign and helped make that happen.

March 2, 2022 will mark the 60th anniversary of Chamberlain’s 100-point game. On that day in 1962, as a member of the Philadelphia Warriors, Chamberlain scored 100 points against the New York Knicks at the Hershey Sports Arena. The Warriors won that game, 169-147. Chamberlain’s 100-point game is still considered one of the greatest records in NBA history. As this debate continues, a person can only wonder if Chamberlain will ever be considered the greatest NBA player of all-time. Unfortunately, this is a debate that may never be settled.