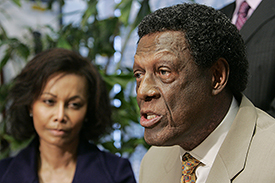 Elgin Baylor, the former Los Angeles Clippers general manager who left the basketball team last fall after 22 years, speaks at a news conference announcing he has sued the franchise, the NBA and team owner Donald Sterling alleging employment discrimination, with his wife Elaine at his side, in Beverly Hills, Calif., Thursday, Feb. 12, 2009. The lawsuit maintains that Baylor was “discriminated against and unceremoniously released from his position with the team on account of his age and his race” and that he was grossly underpaid. (AP Photo/Reed Saxon)