A Matter Of Luck 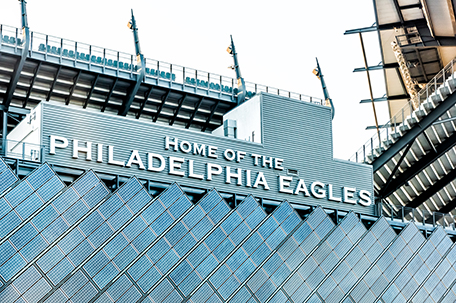 This weekend’s NFC Championship matchup between the Philadelphia Eagles and the Minnesota Vikings pits two hard luck franchises against each other.

Sunday’s NFC Championship game between the Minnesota Vikings and the Philadelphia Eagles at Lincoln Financial Field will be a matchup of two franchises that have lost six Super Bowls in total and have had more than their share of post-season disappointments.

From 2001 to 2008, the Eagles went to five NFC title games, losing four of them. When the team did win the NFC Championship in the 2004 season, they went on to lose to the New England Patriots in Super Bowl XXXIX. Meanwhile, the Minnesota Vikings haven’t won a NFC title game since the 1976 season, where they lost to the Oakland Raiders in Super Bowl XI. Since then, they’ve lost four title games, three of which were lost in the final minute or in overtime.

(In other words, they know exactly how the New Orleans Saints, whom they defeated on Sunday on a fluke play with seconds left in the game, feel…)

Since neither team has won the Super Bowl — the Eagles won a pre-Super Bowl NFL Championship in 1960 — something has to give, right? The football gods are going to reward one of these long suffering fan bases with a trip to the Super Bowl and another chance to win an elusive championship.

But now that we’ve talked about all that history, let’s talk about the game itself.

Neither of the quarterbacks participating in Sunday’s game is going to make anyone forget former Eagles great Donovan McNabb, Vikings Hall of Famer Fran Tarkenton or even Vikings short-termer Brett Favre. But Nick Foles and Minnesota’s Case Keenum, two guys who didn’t distinguish themselves as part of the Los Angeles or St. Louis Rams squads in the early Naughts, have managed to get their teams to the conference final despite pronouncements to the contrary.

Foles is coming off a solid performance in the win over the Atlanta Falcons in the divisional round in which he completed 23-of-30 passes for 246 yards with no touchdown passes, but also no interceptions.  He was efficient and kept the Eagles offense moving at key stretches, mixing passes to tight-end Zach Ertz, and wide receivers Alshon Jeffery and Nelson Agholor with screens to running backs Jay Ajayi and   Corey Clement and smash mouth running from running back LeGarrette Blunt.

That’s something the Eagles will have to do against a Vikings defense that ranks at the top of the NFL. 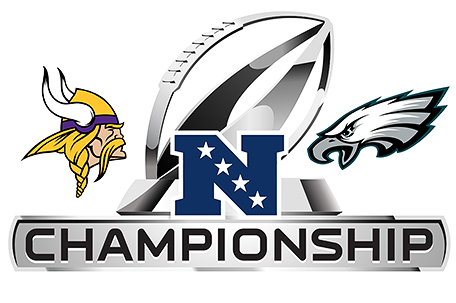 “The quick, short passing game obviously can help, the running game can help,” said head coach Doug Pederson. “Somewhere in there, if you can take a shot, you take a shot and whether you hit, like first play of the game, if you hit it or not, that kind of gets your blood flowing a little bit. And sometimes even tempo, hurry-up, no-huddle offense can get your quarterback into that kind of rhythm.”

It also helps that the Eagles running game, while not great, moved the ball well enough to keep the Falcons defense off balance. The Eagles as a group rushed for 96 yards including a couple of 10-yard plus runs on jet sweeps by Agholor.  Ajayi also averaged close to four yards per carry.

It kept the Eagles from being one-dimensional, Ertz, the tight end, said.

“Yeah, I thought we were really good on first and second down in the second half of that game last week,” he said “We kind had the RPOs (run pass options) early on first down that put us in those positions to be successful. I thought Doug [Pederson] a really good job. One of the things that stood out is that we never got in those third-and-really long situations, third-and-11-plus situations where you have to have the running back and the tight-end chip. You never want to be in those situations and we kind of stayed out of those, so that was definitely huge for us.”

Meanwhile, the Eagles defense is not taking Keenum and the Vikings offense lightly. This is an offense coming off the high of the “Minneapolis Miracle”, when Keenum hit Stefon Diggs on a 61-yard touchdown with 10 seconds left to defeat the New Orleans Saints.

Keenum, who was the NFL’s 12th rated passer, has been efficient. In the game against the Saints, Keenum was 25-of-40 for 318 yards with one touchdown and one interception.

But the Eagles defense is no slouch—they are the fourth ranked defense in the league and are first against the run.  The Vikings running game ranked seventh during the regular season despite the loss of rookie Dalvin Cook. Latavius Murray and Jerick McKinnon are averaging close to four yards per carry.

Defensive end Brandon Graham recognizes this and says the defense does as well.

“Oh, yeah, you can’t take nobody lightly and I think Case does a good job as far as moving in the pocket, being able to extend plays with his legs and you know just being able to trust himself going out there,” he said. “You know, going out there, making plays because he’s got the receivers. He’s got the running game that’s been helping him take a lot of pressure off of him.”

The Eagles, who managed to become the Number One seed despite a slate of injuries that includes MVP-candidate quarterback Carson Wentz, are once again the underdog despite this being a home game.

So expect the return of the Dog Masks. And a shoulder chip you can see from space.

“The disrespect continues,” said Eagles Pro Bowl defensive tackle Fletcher Cox. “For us to be the No 1 seed and to have this championship run through the Linc, what more do you want? At the end of the day, respect is not given, we gotta go out and take it like we’ve been doing all year. I think we’ll go out and dominate.”

The NFC Championship game between the Philadelphia Eagles and the Minnesota Vikings will be played on Sunday night at 6:40 p.m. at Lincoln Financial Field in South Philadelphia. Tickets are sold out, but if you want to catch the game, it’ll be on Fox-29, beginning with the Fox NFL-Sunday pregame show at 6 p.m.