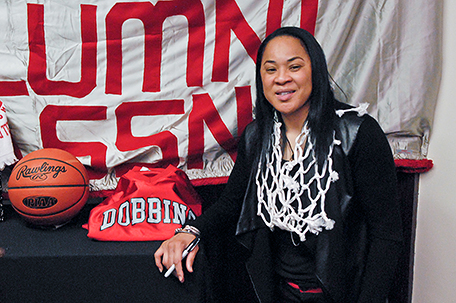 Now that the University of South Carolina head coach and Philadelphia basketball legend Dawn Staley finally has that elusive national championship on her mantel, what mountains are there left for her to climb in a sport she’s long dominated?

In the not too distant future, Staley will be the head coach of the U.S. Women’s Olympic basketball team; another gold medal there will certainly bolster her Hall-of-Fame career. 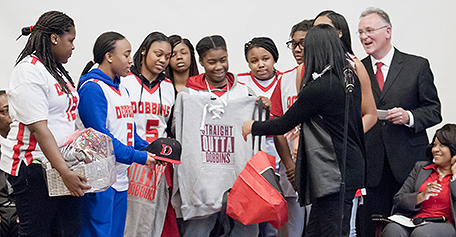 Dawn is showered with gifts at her high school alma mater Murrell Dobbins by the girls basketball team. Dobbins had the celebration in honor of her NCAA Championship win by her South Carolina Women’s Basketball Team. (Photo: Bill Z. Foster)

But at some point, Staley will have done everything possible in the Women’s game. Could she possibly coach in the Men’s game, particularly in the NBA?

I wouldn’t count her out.

While there are plenty of men coaching women’s basketball at both the collegiate and pro level, there are very few women coaching men’s basketball. Tennessee State athletic director Teresa Phillips once coached the men’s team back in 2003.  Former collegiate star and WNBA star Becky Hammond is an assistant coach with the San Antonio Spurs.

But if there was any woman who would do a good job coaching men at either the collegiate or pro level, and be very good at it, it’s Staley.

During her time at Temple, Staley would often have her team practice with former Coach John Chaney’s men’s team. She would often say that going up against the guys would make her teams stronger, something she knows from experience. 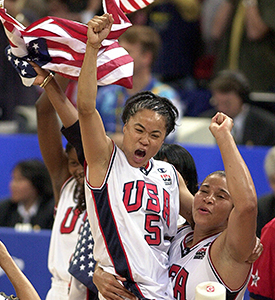 In this Sept. 30, 2000, file photo, United States’ Dawn Staley (5) and Nikki McCray, right, celebrate the USA’s victory over Australia in the women’s gold medal basketball game at the 2000 Summer Olympic Games in Sydney, Australia. Two people with knowledge of the decision say Dawn Staley will be the next U.S. women’s basketball Olympic coach. They spoke to The Associated Press Thursday, March 9, 2017, on condition of anonymity because the decision hasn’t been publicly announced. The 46-year-old Staley has coached South Carolina since 2008, guiding them to a four straight Southeastern Conference regular season titles and a three consecutive SEC Tournament crowns. (AP Photo/Elise Amendola, File)

Staley’s path to greatness as a Philadelphia basketball icon was forged on the playgrounds of North Philadelphia, where she developed her basketball skills playing against the guys that included the likes of Bo Kimble and the late Hank Gathers, who were both legendary collegiate stars at Loyola Marymount in California. She was a highly-recruited star at Murrell Dobbins Tech.

Before her South Carolina squad made their run through the 2017 NCAA Tournament, Staley told reporters that she believed a woman could coach men at both the collegiate and pro levels if given the opportunity.

“As you can see our game has some incredible coaches,” Staley said last month before her team’s run for the national championship. “I think it’s about opportunity. When given the opportunity you rise to the occasion. Just because there’s a gender involved doesn’t mean that it detracts from what you have cerebrally.”

Staley, already a member of the Basketball Hall of Fame, said a coaching gig in the NBA would be a huge challenge for her. If she could turn an NBA franchise around and make it a consistent winner, Staley’s status as a great coach in both men’s and women’s basketball would transform into legendary status.

Considering the personalities around the NBA, coaching the guys in the pros might be a bit of a let down because you don’t have the same level of control in the pros that you do at the collegiate level.

“I want to be the best in my profession,” Staley said. “If that’s crossing gender lines and going to the NBA, why not? I’m here to grow. I want to continue to learn. In order to do that, you’re going to have to crossover at some point.”