A legend among the ancestors 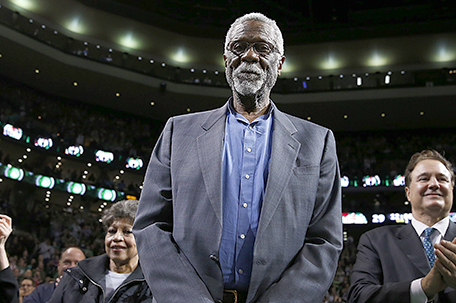 With the passing of NBA legend Bill Russell, another warrior takes his rest.

ABOVE PHOTO: Boston Celtics legend Bill Russell stands court side during a tribute in his honor in the second quarter of an NBA basketball game against the Milwaukee Bucks in Boston, Nov. 1, 2013. The NBA great Bill Russell has died at age 88. His family said on social media that Russell died on Sunday, July 31, 2022. Russell anchored a Boston Celtics dynasty that won 11 titles in 13 years. (AP Photo/Michael Dwyer, file)

If the Basketball Hall of Fame in Springfield, Mass. ever constructs Mount Rushmore, Bill Rus-sell, along with Philadelphia’s own Wilt Chamberlain, would definitely be among the iconic im-ages chiseled in stone.

From high school to the pros, Russell’s teams were the last ones standing more often than not. Off the court, Russell was a man who never hesitated to speak his truth.

Last Sunday, Russell joined the ancestors, dying peacefully in his sleep with his wife Jeannine at his side in his home outside of Seattle. He was 88.

“Bill Russell’s basketball career was nothing short of outstanding,” said former Philadelphia Tribune sportswriter and author Donald Hunt. “He was able to play to a point where he made other players in a lot of ways just from his own skills.”

Philadelphia sports fans will always remember the 6 ft. 9 in. Russell and his Celtics teammates for being a nemesis to Wilt Chamberlain and the Philadelphia Warriors (who later became the 76ers.) The Russell-Chamberlain rivalry was one of the first defining individual rivalries of the NBA.

“The rivalries were classic and iconic,” Hunt said. “You had to get to your TV set because you knew that Wilt was going against Russell. They really battled like big men, like titans did. When Hal Greer and Wali Jones would get the ball inside to Wilt and Wilt would go to work on him. There were times when (Russell) would stop Wilt. …They would make great play after great play. It was really, really battle. … They warriors on the court, but they respected each other.”

For all his success on the court, Russell was never afraid to be outspoken about the racism he faced living in a racially polarized city like Boston. He was also outspoken in the world of sports as well. In 1961, the Boston Celtics were scheduled to play an exhibition game in Lexington, Kentucky when two Black Celtics players — future Hall-of-Famers Sam Jones and Thomas “Satch” Sanders — were denied service in a coffee shop at the hotel where the team was stay-ing.

Russell, along with Sanders, Sam Jones and K.C. Jones, went into then Celtics head coach Red Auerbach’s office and told him that they, along with a couple of Black players from the St. Lou-is Hawks, were not going to play in that exhibition game because they were treated unfairly.

“We’ve got to show our disapproval of this kind of treatment or else the status quo will pre-vail,” Russell said the day after the protest. “We have the same rights and privileges as anyone else and deserve to be treated accordingly. I hope we never have to go through this abuse again.”

At a time when it was taboo for Black athletes to speak out on anything, Russell was very ac-tive in the Civil Rights Movement and was unwavering in the fight against injustice. In a state-ment released by Russell’s family on Twitter: “Bill called out injustice with an unforgiving can-dor that he intended would disrupt the status quo, and with a powerful example that, though never his humble intention, will forever inspire teamwork, selflessness and thoughtful change.”

Perhaps one of the more memorable moments of Russell’s activism among Black athletes was back in 1967 when he and Jim Brown and other athletes like Green Bay Packers Hall-of-Fame linebacker Willie Davis came together in solidarity with Muhammad Ali, who had his heavy-weight championship taken away from when he refused to be inducted into U.S. Army to fight in Vietnam.

In 2011, then-President Barack Obama gave Russell the Presidential Medal of Freedom for his willingness to fight for equality for all Americans.

Included among Russell’s 11 championship rings are his five NBA MVP awards and 12 All-Star appearances. He was an outstanding shot blocker and considered one of the best defenders in NBA history. He had a career 21,260 rebounds. He once had 55 rebounds in a game. He had 12 straight seasons where he pulled down 1,000 rebounds in a season.

What often rankles old heads like me is that in conversations about the greatest players in NBA history, Russell is often left off those lists, especially by younger sportswriters and fans who are under the impression that the NBA started in the 80s and 90s. Russell was a transcendent generational player who stood tall on and off the court.   Along with players like Chamberlain, Jerry West, and Elgin Baylor, Russell set the foundation for being a team player.  In 2017, Rus-sell was given the NBA’s Lifetime Achievement Award.

So the next time, ya’ll wanna talk about the greatest NBA players, you gotta put Russell near the top of those lists.