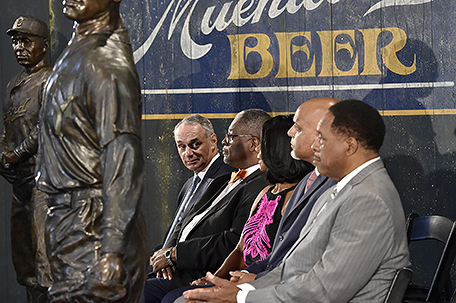 The Negro League Baseball Museum shines a light on the players who played with Jackie Robinson first.

With Major League Baseball’s All-Star Game coming up on Tuesday, I am reminded of the time prior to Jackie Robinson’s breaking the color line when baseball, not basketball, was the most popular sport among African-Americans.

“Let me tell you something, fella, Negro League baseball was a happening in the Black world,” the late Stanley Glenn told me when I interviewed the former member of the Philadelphia Stars in 2005. “Women came to the ballpark dressed in their Sunday best, high heel shoes, silk stockings and they had hats on their heads on their hats and long-sleeved gloves … Let me tell you something — we married some of the girls. They would be there dressed to kill. You would think you were at a cotillion.”

While memories of those days have faded along with African-Americans interest and participation in the game, there’s a monument to the Stars at 44th and Parkside in West Philadelphia, as well as a wing dedicated to Negro Leagues at the new National Museum of African American History and Culture in Washington, D.C.

But if you really want to see what the Negro Leagues were all about, and you can’t find a copy of the Richard Pryor film “The Bingo Long Traveling All-Stars and Motor Kings”, a visit to the Negro Leagues Baseball Museum in Kansas City is a must.

Since it opened in 1997, the Negro Leagues Baseball Museum has become a showcase and permanent monument to the greatest players in the history of baseball; players that were kept from the major leagues because of the color of their skin.

“It’s an American history, it really is,” said Bob Kendrick, the museum’s president. “It is a story of America at her worst, but it’s also a story of America at a time of her best because what drives this story is the American spirit. America didn’t want to let these guys play, but the American spirit propelled them to do so. That’s why it’s such an awe-inspiring and such a compelling story that few people have been exposed to until the rise of the Negro Leagues Baseball Museum.”

Whether you walk inside the museum’s hallway with the uniforms and old photographs of the players or you’re seeing the bronze statues of players like Paige and Gibson playing their positions in a makeshift stadium, the Negro Leagues Baseball Museum is a living, breathing monument to the greatness of those players.

“Ryan used to come to the museum before we even knew who Ryan Howard was,” Kendrick said. “Every year he would come to the Negro League museum because he said it was place he need to come before spring training. He drew strength. It was almost like his rites of passage.”

In the aftermath of being jeered with racial epithets by a fan at Boston’s Fenway Park, Baltimore Orioles centerfielder Adam Jones visited museum and talked about its importance to him.

“Some have no idea what the Negro Leagues are about or what they went through. I appreciate people coming out here to learn something they didn’t know about the great game of baseball through the Negro Leagues’ eyes,” Jones told MASN.com (MidAtlantic Sports Network) after donating $20,000 back in May.  “This is just the place to learn what these great men had to go through.”

The contribution will support the museum’s operations, services, its expansion as well as its educational and community programs. The portions of the money will go to complete the Buck O’Neil Research and Education Center on the Paseo YMCA site where Andrew “Rube” Foster formed the Negro Leagues in 1920.

Kendrick said museum’s partnership with MLB through Commissioner Rob Manfred and MLBA Executive Director Tony Clark is yet another way of reaching out to the African-American community in an effort to renew their interest in the sport.  African-American players make up just 7.1 percent of the athletes playing the sport.

Not only was the financial contribution significant, it was the presence of both Clark and Manfred at the museum to make the announcement last month that made it even more special for Kendrick.

“They have embraced the notion of the museum playing a significant role in its effort to bringing African-Americans back to our sport in terms of playing and watching it,” Kendrick said. “This is the first time that we’ve sat down and look at this as a collaboration and the partnership aspect of what this means.

“(Manfred and Clark) being here to me, in some regard, is more important than the financial because it raises the platform, the profile of our museum and how it is seen and valued by those who run our great sport.”

The Major League Baseball All-Star Game will be broadcast from Marlins Park in Miami beginning at 8pm on Fox-29.