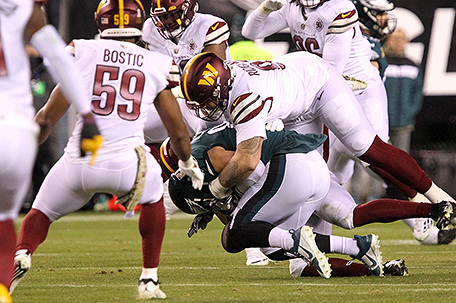 While there was some questionable officiating in the Philadelphia Eagles loss to the Washington Commanders, the team’s first loss was its own fault.

ABOVE PHOTO: Eagles’ TE Dallas Goedert tackled early in the fourth on the facemask.  (Photo by Webster Riddick)

You can look at the Philadelphia Eagles 32-21 loss to Washington Commanders in a variety of ways.

From a few questionable calls by the officials, a ball control offense from the Commanders that kept the Eagles offense off the field for most of the first half or the Birds inability to keep the Washington defense from applying pressure on quarterback Jalen Hurts, a lot went into the team’s first loss.

But while all of those things are true, the Birds inability to get out of their own way was the biggest culprit. The Eagles committed four turnovers and seemed to be out of sync on both sides of the ball.  As much as the Birds politely acknowledged a solid effort by the Commanders, they also said the first loss of the season was more about what the Eagles didn’t do.

“It’s on us,” Hurts said after the game. (Washington) is a great football team and they’re well coached. With the uncharacteristic mistakes that we’ve made. Things that we haven’t done all year in terms of our formula for winning football games. When you go out there and turn over the ball like that, not so good things happen.”

For the Eagles, there were a lot of things that went wrong in this game.

After the Eagles took a 14-7 lead with 12:21 left in the second quarter, the Commanders scored and controlled the ball on their next four possessions (a touchdown and two field goals) to take a 23-14 late in third quarter. Meanwhile, the Eagles managed just 32 yards and one costly interception during that span.

The Commanders offense gained 152 yards on the ground, converted 12-of-21 third downs and won the time of possession battle. For the game, the Washington held the ball for 40:24 while the Eagles held the ball for just 19:36.

“You create your own luck,” Sirianni said. “And we played like crap. We didn’t do a good enough job. It feels like things go against you. Those plays, those scenarios that happen when you play like that get magnified, whether it was the right call or wrong call. So, we made our own luck today and it was bad.”

Despite their lackluster play throughout most of the game, the Eagles got back into the game early in the fourth quarter thanks to a 12-play, 80-yard drive that ended with an 11-yard touchdown pass from Hurts to wide receiver Devonta Smith.  Hurts completed complete 17-of-26 passes for 175 yards with two touchdown passes and one interception.

After Hurts touchdown pass to Smith, the Eagles would come no closer and blew every opportunity they had to get back in the fourth quarter.

After an interception of an errant deep pass by Heinicke by Eagles safety C.J. Gardner-Johnson deep in Commanders’ territory, the Eagles got the ball back and seemed ready to go on a drive to take the lead.

But it never happened. On first and 10 from the Eagles 31-yard line, Hurts hit tight end Dallas Goedert, who was tackled by Commanders defensive tackle John Ridgeway. He grabbed the Birds tight end by the face mask and caused the ball to slip from Goedert’s arms where it was recovered by linebacker Jamin Davis.

Clearly, the referees did not see the face mask that would have nullified the fumble. That led to a 55-yard field goal by Joey Slye to give Washington 26-21 lead.

On their next, the Eagles had another opportunity to win the game, but another costly turnover robbed them again.  Hurts hit wide receiver Quez Watkins for a 50-yard completion at the Washington 23.  When Watkins hit the ground with the catch, he wasn’t touched by a Commanders defender until he got up to run.

That’s when Washington cornerback Benjamin St. Juste stripped Watkins of the football. It was recovered by safety Darrick Forrest.  It was another blown opportunity by the Birds.

“We didn’t play our brand of football,” Watkins said. “We didn’t protect the football.”

Late in the game, the Eagles still had another opportunity to get the ball back for the offense when the Hassan Reddick sacked Heinicke for a 12-yard loss with 1:45 left. But after Reddick tagged Heinicke, defensive end Brandon Graham crashed into the Washington quarterback and was flagged for an unnecessary roughness penalty and that was it.

“We can’t put the game into the ref’s hands,” Graham said. “I was trying to touch him down …but that’s on me. I own that one.”

Washington got their final score a fumble recovery in the end zone by defensive end Casey Toohill after the Eagles tried to lateral ball around in an attempt to get a miracle touchdown.

Fortunately for the Eagles, they have a short week to attempt to get the taste of how they played in their first loss out of their mouths. They’ll try to get back on the winning track when they play the Indianapolis Colts on Sunday. You can catch that game on CBS-3, beginning at 1pm.