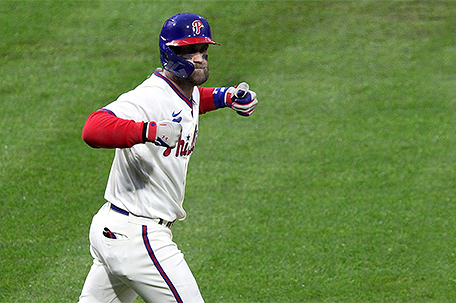 By hitting a two-run homer that put the Philadelphia Phillies into the World Series for the first time since 2009, Bryce Harper fulfilled the dream of every young boy who has ever picked up a bat.

ABOVE PHOTO: Phillies designated hitter Bryce Harper runs the basesies  after sending the team to the World Series with a game-winning two-run home run. The Phillies defeated the San Diego Padres 4-3 on Sunday to claim the National League Championship pennant and now head to Houston to take on the Astros for the World Series crown. (Photos by Webster Riddick)

Whenever I’ve watched movies about baseball, there’s always that scene when the “hero” comes through with the dramatic home run.

The movie that comes to mind for me is “The Natural” when Robert Redford’s character knocks a home run into the stadium lights causing them to explode like Fourth of July fireworks.

For Hollywood to write a better script than the one the Philadelphia Phillies wrote on Sunday would have been impossible. When Bryce Harper hit a dramatic, two-run home run in the bottom of the eighth-inning, the Phillies, who were down by two before that happened, found themselves catapulted into the World Series for the first time since 2009.

The Phillies 4-3 win over the San Diego Padres in Game 5 of the National League Series in front of a frenzied sellout crowd of 45,485 fans gave the franchise its eighth National League pennant.  The Phillies begin their quest for the team’s third World Series title in Houston on Friday when they take on the Houston Astros, the champions of the American League.

After the Padres had taken a 3-2 lead in the seventh inning thanks to a wild pitch by Phillies reliever Seranthony Dominguez that scored Padres pinch-runner Jose Azocar, it looked like the team would be headed back to San Diego for Game 6.

Phillies catcher J.T. Realmuto started that eighth inning with a single. When Harper came up for his at-bat, the fans at Citizen’s Bank Park were hoping he’d put it in the bushes.

Most of us know that it takes a lot of luck for that to happen. For players in that situation, there’s a fine line between having the belief in yourself and playing hero ball and trying too hard to come up with the big hit.

“There has to be a confidence,” said Rhys Hoskins, the Phillies first baseman. “You have to believe that you step in the box and you’re dangerous. I know Bryce definitely thinks that. He’s so good with his eyes that I’m guessing that, if he feels like he can get the pitcher in the strike zone with the way that he’s seeing the ball, the way that he’s swinging the bat, that if we can get the pitcher in the strike zone, he’s got a pretty good chance to do some damage, and he did an outstanding job of that. “

Phillies principal owner John Middleton was hoping Harper would find a way to drive in Realmuto from first with an extra-base it. A home run was asking the baseball gods for too much.

“You can never think that,” Middleton said. “Frankly, I was just hoping that (Harper) would hit a gapper and J.T.’s speed would allow him to score and tie the game and maybe (Castellanos would come up or somebody after that would driver Harper in from second. That’s what I was hoping for.”

“Asking for a two-run homer in the bottom of the eighth inning to win the game that’s being kind of a pig. The baseball gods might harm you,” Middleton said with a smile. “That’s too far.”

That said, Middleton gladly accepts the blessing from the baseball good because moments like that are why they signed Harper to a 10-year, $330 million contract.

“Every penny we paid for that was paid back on that home run,” Middleton said. “We wouldn’t be here without him.”

As I watched Harper’s home run fly out of the park from the press box, I was, like, “You’ve gotta be ‘bleepin’ kidding me!” I have seen more than my share of these moments on TV and on old films from New York Giants Bobby Thompson’s walk-off homer against the Brooklyn Dodgers in 1951 to Joe Carter breaking the hearts of Phillies fans in the 1993 World Series.

Seeing it in person was fun, and it’s something we all dreamed about doing as kids regardless of the sport — hitting the win basket like Michael Jordan, throwing the game winning touchdown pass in overtime of the NFC Championship like Russell Wilson.

That’s what Harper talked about during his postgame press conference.

“Yeah, I think we all think in our backyards it’s the World Series, right? Every moment, bottom of the ninth, bases loaded, 3-2 count, best pitcher on the mound in the World Series,” Harper said. “The opportunity to be able to be in that situation, I’m not there unless J.T. gets that hit in that at-bat. I told (Realmuto) Long before I walked up the steps, I said, let’s give them something to remember.”

And Phillies fans will remember that home run for a good, long time.

If you want to see what Harper, Hoskins and the Phillies do next, the World Series begins on Friday night on Fox-29. First pitch is expected to be thrown at 8:03pm.

“If you’re going to be the champs, you’ve got to beat the champs!”