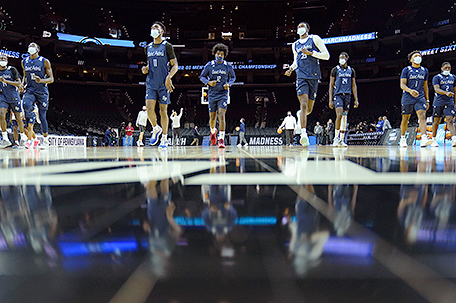 While they aren’t orange like the Flyers Mascot, the Peacocks of St. Peters play a style of basketball Philadelphians can appreciate.

If there’s a squad among the four teams playing in the NCAA Tournament’s Eastern Regional semifinals at the Wells Fargo Center that gritty, hardworking Philadelphians can appreciate, it would have to be the Peacocks of St. Peters, the No. 15-seed.

When the tournament draw came out on Selection Sunday, most people didn’t have the Peacocks getting past the No. 2 seeded Kentucky Wildcats. But thanks to beating the Wildcats in overtime, and then taking out No.7 seed Murray State, the team wound up eliminating the entire State of Kentucky from the tournament.

On Friday, St. Peters will face another Herculean task when they take on the Purdue Boilermakers (29-7) at Wells Fargo. While they know it’ll be difficult, their tournament run shows that with the right amount of hunger, nothing’s impossible.

Unlike most of the larger schools in the tournament, St. Peter’s doesn’t have the McDonald’s All-Americans or future NBA Lottery picks.

While any college basketball coach would love to have that once in a generation superstar on his team, St. Peter’s head coach Shaheen Holloway employs the philosophy made famous by the late Temple University coach John Chaney: bring in players who are diamonds in the rough and polish them enough to show the big schools what they missed.

“Typically, those are the types of kids I like to recruit, guys that are under-recruited, have a chip on their shoulders with something to prove — tough, hard-nosed kids, tough-minded,” Holloway said. “I’m a coach that really gets after my guys, so you’ve got to be a tough kid and tough-minded to play for me.”

St. Peter’s success in this year’s NCAA Tournament has drawn the admiration of coaches around the country. UCLA Coach Mick Cronin said he also leans toward kids who aren’t the big-time blue-chip players. Last season, Cronin’s Bruins made it to the Final Four as an 11-seed and having participated in the First Four play-in game.

“To me, it helps if you’re underrated because you have your and your ambition instead of having it given to you by some guy in a basement that ranks you seventh in the country,” Cronin said.

The Peacocks are a team up mostly of kids that come from New York, New Jersey, and a couple of kids from the Philadelphia area, most notably freshman forward Clarence Rupert (6-8, 245, who is averaging 4.3 points per game.  He scored seven points in the Peacocks’ second-round win over Murray State.

Rupert, who grew up in North Philly, left the city when with his family to attend the Miller School of Albermarle located in Charlottesville, Va. During the summers between school, he played AAU ball in Philadelphia with Philly Pride.

Though he is not the main star for this St. Peter’s squad, Rupert’s teammates love the energy he brings when he’s on the floor.

“He’s very hyped about coming back home and representing back home and being on this big stage his freshman year,” said senior forward KC Ndefo.  “Clarence definitely brings a lot of passion and drive to our team. He’s a big part of our team. …Having a kid from Philadelphia, they bring toughness, too.”

Williams said the Boilermakers have had their own share of hardship and also have something to prove after being knocked in the first round of last year’s tournament along with other heartbreaks in the tournament, which includes losing in the Elite Eight in 2019.

“Man, it’s a tough thing to deal with, but you look at the past couple years, you’ve come up short,” Williams said.  “We’ve always been right there; we’ve just got to get it,

In the backcourt, First-Team All-Big 10 point guard Jaden Ivey averages 17 points per game.  But Holloway said his Peacocks have a tough task in front of them. He said playing against some of the more high-profile programs like Connecticut, Auburn and Providence have helped his team prepare for the teams they’ve faced so far in the tournament.

“That’s why I don’t think these guys are intimidated by anybody because these guys just go out there and play basketball and have fun,” Holloway said.

Along with their overall toughness, St. Peter has a few players that can put the ball in the basket. Junior guard Daryl Banks III is the team’s leading scorer, averaging 11.7 points per game. He is shooting 37 percent from the three-point range.

To see how the Peacocks do and to check out the rest of the 2022 NCAA Men’s Semi-Finals at the Wells Fargo Center, catch the action on CBS-3, starting Friday night at 7 p.m.

Eagles lose in DC to a team with no name