A Game Of Inches 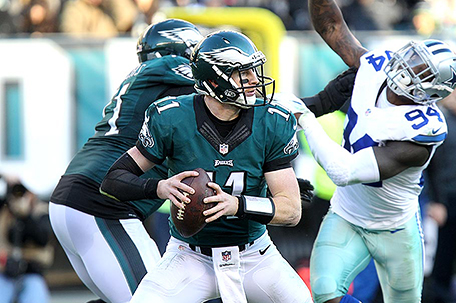 ABOVE PHOTO:  Eagles beat the Cowboys 27-13; last Sunday but still miss much needed talent at key positions to perform at championship level.  (Photo by Webster Riddick)

“A billion here and a billion there, then you’re talking real money.”

When the late U.S. Sen. Everett Dirksen uttered those words, he could have been talking about the Philadelphia Eagles and their 2016 season.

With a play here or a play there, the Birds might be getting ready to take part in the postseason. But as I’ve been saying all season, the Eagles lack of talent at key positions was ultimately what stood between them and missing the playoffs for a third straight season.

Eagles Head Coach Doug Pederson admitted as much after last Sunday’s win over the Dallas Cowboys.

“We’re very close,” he said. “We’re very close. And when you talk to coaches around the league, they see it. They see it on the outside. Even though the win-loss record and everything are not in our favor, I think we lost six games this year by a touchdown or less and we’ve just got to learn to finish those games.”

To me, that says the Eagles season came down to not having enough playmakers on both sides of the football.

Eagles safety Malcolm Jenkins said an upgrade in personnel can only make the team better.

“If you look any position, we add one person then we’re where we need to be,” Jenkins said. “If you look at all of these games we’re one play away from winning basically. Whether that’s on offense at the skill position whether it’s defense in the secondary or another edge rusher, you add one and we get the play that we need.”

On offense, the Birds receivers couldn’t get enough separation to make plays in the passing game.  The priority for next year is a difference-making receiver that can get separation and flip field position on one play. 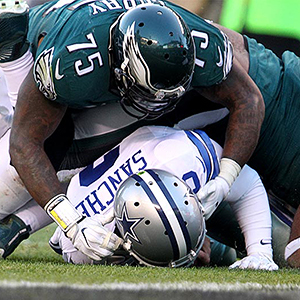 As for the Birds’ receivers this season, Pederson’s theory of receivers making big plays via the scheme was a bunch of malarkey.  As a team, the Eagles only had seven pass plays that went more than 30 yards. Jordan Matthews (73 receptions for 804 yards) and tight end Zach Ertz (78 receptions for 816 yards) were good possession receivers but not game breakers.

The Eagles weren’t anything to write home about in the rushing game in 2016. They ranked 11th in the NFL in rushing and outside of a few big runs by Darren Sproles, the Eagles running backs—Ryan Mathews, rookie Wendell Smallwood, Byron Marshall and Kenjon Barner, showed flashes of brilliance but were average at best.

Even though Mathews led the team in rushing, there were times when he struggled with hanging onto the football. In a loss to the Detroit Lions, the Eagles were trying to run out the clock when Mathews fumbled with 2:34 left in the game and that enabled the Lions to kicked the go-ahead field goal that ultimately won the game.

Smallwood showed flashes as a rookie, but simply couldn’t stay on the field because of injuries. He struggled with injuries during the preseason and found himself as the No. 3 back on the Eagles depth chart. He ended the season on the injured reserve list with a sprained MCL in his knee. He gained 312 yards on 77 carries and one touchdown. He caught six passes for 55 yards.

What really hurt the Eagles offense was the 10-game suspension of right tackle Lane Johnson. During the former University of Oklahoma star’s absence, the Birds struggled to find continuity in the running game and struggled to protect rookie quarterback Carson Wentz.

“When you lose the best player in the league at his position, it’s tough,” Ertz said. “Guys had to change their roles. I had to chip protection a lot more, (Darren Sproles) had to chip in a lot more. We had five right tackle this year …When you have all five guys together, you can see what the possibilities are.”

Speaking of Wentz, the former North Dakota State star started off hot but then started making rookie mistakes. But if Wentz had the weapons that fellow rookie starter Dak Prescott had in Dallas, he might have been in the running for Rookie of the Year.

Wentz finished the season with 3,782 passing yards, 16 touchdown passes, 14 interceptions while completing 62 percent of his passes. He displayed a tremendous ability to buy time using his feet to extend his opportunities to throw the ball down the field and run for the first down.

The most important thing Wentz established this season is that he is definitely the franchise quarterback of this team and definitely worthy of being the No. 1 pick.

“The game slowed down for him,” Ertz said. “You seeing him going through all of his progressions, getting to that third and fourth read. I think that’s huge for us going forward. Guys have all the confidence in the world in him.”

Defensively, the Eagles started off hot but then finished in the middle of the pack in the NFL in defense, finishing 13th in yards allowed. They were also 13th against the pass and 16th in sacks with 34. Before they won their last two games of the season, the Eagles defense had trouble giving up big plays and holding leads.

So in the end, a bunch of little plays ended up costing the Eagles a lot.

But the NFL Draft comes to Philadelphia this spring. Maybe they’ll be able to fill in the team’s holes so that they’ll make enough plays to go to the playoffs next season.