A Fond Farewell: Michael Vick unlikely to return to Eagles in 2014 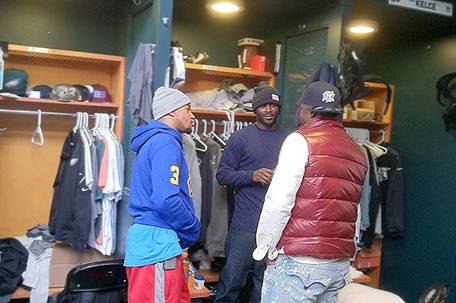 ABOVE PHOTO: Eagles quarterback Michael Vick shares a light moment at his locker with teammates wide receiver DeSean Jackson (left) and running back LeSean McCoy (right). Vick will be an unrestricted free agent at the end of the season.

As Philadelphia Eagles quarterback Michael Vick went about cleaning out his locker, his teammates stopped by to pat him on the back, offer words of encouragement, and some had him sign his autograph to a pair of sneakers.

Wide receiver DeSean Jackson and running back LeSean McCoy spent the most time laughing and joking with Vick and telling him not to pack his things.

“I think Mike Vick has meant a lot to our team,” Jackson said. “He’s done some great things since he’s been here. He’s been a mentor and a brother to me. He’s a professional. He’s still a great quarterback.  I think he has a lot of upside for being a starting quarterback in this league.

“Regardless, if he’s here or anywhere else, he will do a great job. A lot of people have turned his back on him and really don’t think he can still do it. In my eyes, I think he’s still a top player in this league. He’s very dangerous. ”

With Vick at the end of his current one-year contract with the Eagles, the various gatherings at his locker represented one final farewell to a guy that has been a team leader throughout much of his time with the team.

Wide receiver Riley Cooper, whose offensive comments about African-Americans at a country music concert got him suspended during training camp, said Vick has been a supportive teammate from his arrival in Philadelphia and during the time he was facing criticism from fans and teammates in aftermath of his him using the N-word.

“He went out of his way when I first got here to talk me and so I followed his lead. He’s a great guy, great player. If I’m back here, I hope he is, too,” said Cooper, who 47 passes for 837 yards and eight touchdowns.

While the team hasn’t officially said if they were going to re-sign him or not, it is likely Vick will not be back with the Birds for the 2014 season. Vick said he still believes he can be a starting quarterback in the NFL and is also open to possibly staying with the Eagles as a backup.

“My desire to start will be the same even when I’m 38, 39-years-old,” Vick said. “I’m still 33, I still feel good and like I’ve said before the way that I’ve been able to take care of my body this year. I feel good. I still know that I can play.

“I’m just confident in what I can do based on what I do every day, whether it’s running the scout team in warm-ups or just understanding what our game-plan and concepts are, so I feel like I’m built to do this. I just want to keep it going because I’m not finished yet.”

Since the Eagles loss to the New Orleans Saints in the NFC Wild Card Playoff, Vick said that no one from the Birds front office has approached him or spoken to him about coming back to the team in 2014.

Eagles General manager Howie Roseman said he was proud of Vick’s contribution to the team this season as a backup to Nick Foles, but also said he understands that the former Virginia Tech star wants to have an opportunity to be a starting quarterback.

“For a guy in his situation to take on the leadership role and be supportive of his teammates was incredible,” Roseman said on Monday. “Mike obviously feels and deservedly so that he’s a starter in this league, I’m sure that’s going to be his first choice. I feel like every year we have this conversation about Mike not being back. We just don’t know how things are going to work out. We all really like and appreciate Mike Vick.”

That sentiment was shared by team owner Jeffrey Lurie after the Eagles loss to the Saints Saturday night.

“Michael has been impressive to us, I’m sure to you guys, but also to us internally,” Lurie said. “Incredibly mature as a teammate, a leader, somebody who helped Nick tremendously, he has been a joy to have.  He represented the team always with class.”

In a situation that could have been potentially difficult, Vick worked with Foles and did everything the coaching staff asked of him.

“Unfortunately, he got hurt and that gave an opportunity to another guy,” said Eagles head Chip Kelly.  “I think sometimes for a lot of people, you put yourself in those shoes, that’s hard to wrap your arms around because it’s not like Michael was wrong and got benched.  It was just a unique situation and I think how he helped Nick through the  process, it just tells you the type of person he is and I think that didn’t go unnoticed by me and appreciate everything he did my first year here.”

Going back to when he got out of prison in 2009 and was signed by the team, Vick said he is appreciates the Eagles organization for allowing him to rehabilitate his career as a football player and as a man.

“They’re a lot of good things to talk about,” Vick said. “There have been a lot of things that I have accomplished on and off the field, especially off the field and that supersedes everything.

“That’s one of the goals I set coming out of prison and being incarcerated, I’ve accomplished that more than anything I did on the field”

After Castillo firing, will the Eagles bench Michael Vick?