A Father’s Day tribute to a man of God: Celebrating a journey from drug addiction to church bishop 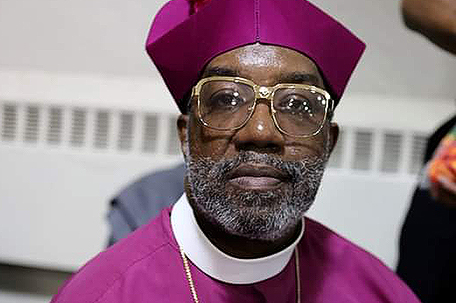 Once known for his hard work in helping kids and saving them from the troubled streets, legendary West Philadelphia High Speedboy basketball star and local church bishop Joe Garrett didn’t always have the strength to save himself from drug addiction.

Before the Lord opened the door for Garrett and gave him the opportunity to do God’s work, he was once a victim and a user of crack cocaine. The 63-year-old Garrett wasn’t ashamed to talk about his former drug habit, it’s a story that he wanted to share and get off his chest. Because of his recovery, he hopes his story can touch someone who may be dealing with the same struggles and tough situation.

It all began when during his first marriage, Garrett began abusing drugs and alcohol.

“I was a victim to my once-worse enemy, and that was the stuff they call crack cocaine,” he said. “I was using crack cocaine before my first wife died and used it more after she passed away.”

Garrett’s first wife, Toi, died tragically in a car accident 33 years ago in Blue Bell, Pennsylvania when her car flew off an embankment and burst into flames. Her badly burned body was flown in a helicopter straight to the hospital, but she was pronounced dead shortly after their arrival.

Garrett will never forget that tragic day. He remembers falling down to his knees and crying on the hospital floor. He was never the same man after that.

After that tragedy, Garrett became an angry and miserable man.  He started abusing even more drugs for hours and hours at a time. The addiction drove him to lose everything, and almost drove Garrett to his own tragic death.

“Once she (Toi) died, I became a straight junkie,” he said. “At that point, I didn’t care about life anymore. I did so much drugs that I almost drove myself crazy. Then I turned to drinking lots of alcohol, and that made everything worse.”

Garrett said he didn’t stop doing drugs until he checked into a rehabilitation center located in Williamsport, Pennsylvania.

“A minister helped me at the rehabilitation center and gave me life again,” he said. “He introduced me to the Bible and showed me a better life from reading the Bible. He gave me the vision to turn to religion and defeat my demons. Once I did that, I started to turn my life completely around. And I’m glad it did. My life turned around for the better.”

Today, Garrett is an ordained minister and bishop of his own church, The New Way of Life Church of Deliverance, located at 8116 Grovers Avenue in the Eastwick section of Southwest Philadelphia. Every Sunday, Bishop Garrett preaches the word of God and he doesn’t hold back anything. He does everything in his power to save those who need to be saved. He starts his church every Sunday morning at 11 o’clock, and there are times when his church doesn’t end until 3p.m.

Another reason Garrett made a serious effort  to change his life around was the fact that he promised his late wife that he would make that change.

“On the morning that she died, we had one of those serious talks about my drug habit,” he said. “She wanted me to leave the drugs completely alone, because I had a hard time stopping. So, before she went to work that morning, we talked about that during breakfast. And about an hour later, she left out the door.”

Bishop Garrett has come a long way from defeating his drug addiction. After he became clean and sober, Garrett became a high school girls basketball coach. He coached several years at Communication Tech High and did his final years at John Bartram High School. He coached the Bartram Lady Braves to many public league division titles. His daughter, Bryce Garrett, played for him at John Bartram High. Bryce won the Public League scoring title in 2015. She averaged 21.5 points per game.

Addition to Bryce, Garrett’s other daughter, Brooke, scored over 1,000 points for Communication Tech High School and she also recorded over 800 rebounds, which stood as a school record. Garrett’s other three daughters also played high school basketball.

After graduating from West Philadelphia High in 1977, Garrett went on to play basketball at the University of Texas-El Paso and was drafted by the NBA San Diego Clippers. During a NBA Spring training camp workout, he suffered a torn TCL that ended all hopes of a NBA career. However, Garrett did manage to play overseas in Argentina and parts of Europe.