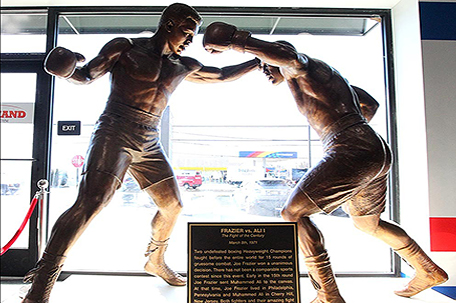 Philadelphia boxing legend Joe Frazier is honored with a statue and mural on the 50th anniversary of the “Fight of the Century” between himself and champ Muhammad Ali.

A new 9 foot tall, 1,600 pound statue was unveiled at the new Joe Hand Gym in Feasterville, Pennsylvania on the 50th anniversary of the Joe Frazier/Muhammad Ali fight which took place on March 8, 1971.

The statue was created to be the new signature piece of hope, dreams, and inspiration to future generations of fighters who train at the new Joe Hand Gym. Hand was one of Frazier’s managers.

The statue was designed by Chris Collins. It was originally commissioned by Dr. Nicholas DePace for use in the future Philadelphia Museum of Sports but will now reside in Joe Hand Gym.

On March 8, Mural Arts Philadelphia dedicated a new mural on 1302 W. Allegheny Ave. to honor Joe Frazier on the 50th anniversary of the “Fight of the Century.”

During the event, Frazier’s family and other VIPs dedicated the mural. Mural Arts artist Ernel Martinez worked with the Frazier family and current boxers at the Athletic Recreation Center to create a design that captured the spirit of Philadelphia’s favorite fighter.