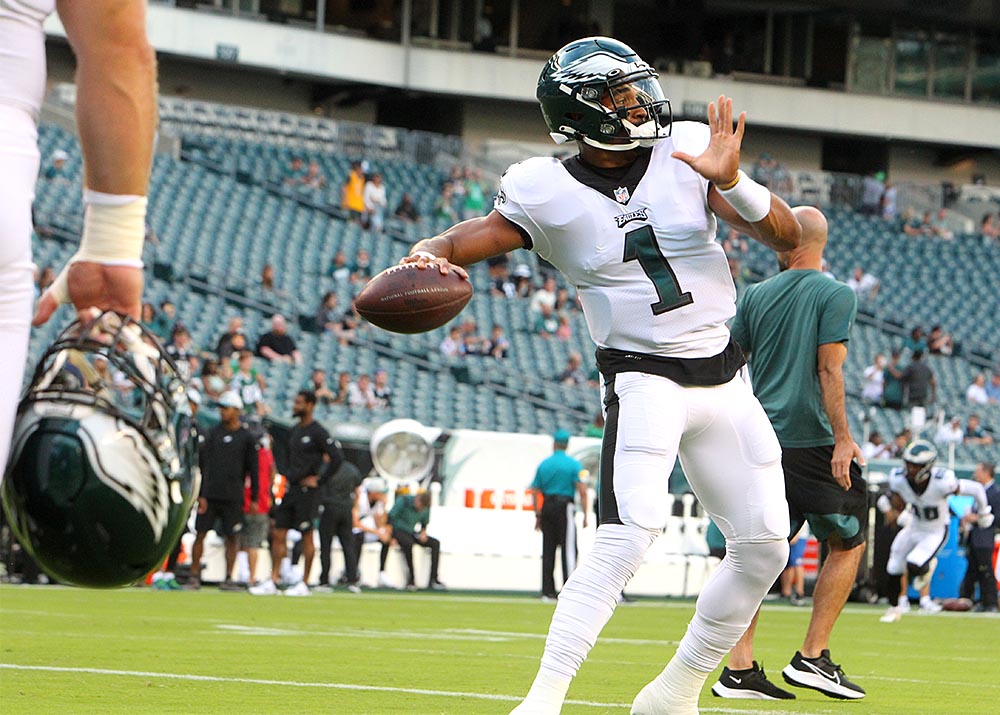 In Sunday’s Battle of the Birds, The Philadelphia Eagles beat the Atlanta Falcons in all phases of the game.

Granted, it’s only one game, but you have to like the Philadelphia Eagles 32-6 victory over the Atlanta Falcons for a variety of reasons.

First and foremost, quarterback Jalen Hurts was what I thought he was going to be. He was efficient in the passing game, completing 27-of-35 passes for 264 yards with three touchdown passes. Hurts completed passes to seven different receivers and when he needed to, he used his legs to make plays, gaining 62 yards on the ground.

The most important takeaway, Hurts said, was making sure he was in sync with his teammates and that they make sure everything they do in practice works out in the game itself.

For the game, Hurts accounted for 326 of the Eagles’ 434 yards of total offense. Perhaps his most impressive drive of the game was late in the first half when Hurts engineered a 12-play, 62-yard drive that culminated with a nine-yard touchdown pass to tight end Dallas Goedert with two seconds left in the first half.

The Eagles also got a solid performance from rookie wide receiver and 2020 Heisman Trophy winner Devonta Smith, who caught six passes for 71 yards and his first NFL touchdown on the Eagles’ first possession of the game-an 18-yard strike from Hurts.

His first NFL touchdown was the culmination of all the time he and Hurts spent working together in practice throughout training camp, Smith said.

“It comes down to reps (repetitions),” Smith said. “I mean when you’re repping so much and you just get used to it and with all the reps that we’ve done that’s why it was executed good.”

It was also a great day for the Eagles’ defense, but it didn’t start out that way. The Falcons, led by former William Penn Charter star quarterback Matt Ryan, looked like they were going to have a field day going through the Eagles’ defense. Atlanta accumulated 144 yards of offense on their first two possessions of the game.

“When they first came out (on the Falcons’ first two drives), they was driving down and we held up in the red zone,” said Eagles defensive end Brandon Graham. “And that was one thing we was talking out there, ‘hey ya’ll they don’t score, if they don’t score, they don’t win. I’m excited this is only the first round. We got plenty more rounds to go, but so far, so good.”

The Eagles special teams got into the act as well. Punter Arryn Siposs had a net average of 44.5 yards per punt. He had three punts that landed inside Atlanta’s 20-yard line, including two inside the Falcons 10-yard line.

You can question the competition because the Falcons aren’t necessarily world-beaters, but it’s still a good start. For right now, the Birds are in first place in the NFC East ahead of the New York Giants, Dallas Cowboys, and the Washington Football Team.

We have a long way to go.

And it continues on Sunday when the Philadelphia Eagles take on the San Francisco 49ers at Lincoln Financial Field, starting at 1pm. You can catch the game on Fox29.