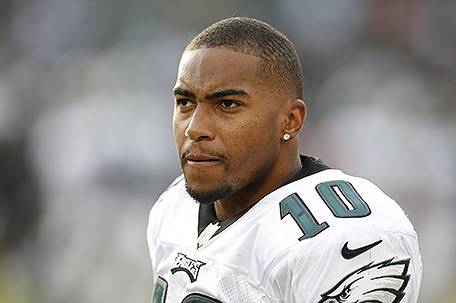 Philadelphia Eagles’ wide receiver DeSean Jackson is the latest example of how displays of wealth can sometimes make a professional athlete a target for criminals.

When you’re a professional athlete, you’re almost always the life of the party based on your ability to keep it going financially.

But as Philadelphia Eagles wide receiver DeSean Jackson found out recently, it’s sometimes best to not have the party at your house.

Jackson’s South Philadelphia home was broken into sometime between Jan. 6 and Jan. 10 while the former University of California star was out of town, according to Philadelphia Police. Police say that the receiver’s mother reported the incident after coming to the house and finding Jackson’s bedroom, which was usually locked, open.  There were no signs of forced entry and the home security system had been removed, police said.

A safe, a 9-mm handgun, a collection of jewelry worth about $125,000 and about $250,000 cash were among the things taken in the burglary. Jackson is offering a $50,000 reward to anyone who has information to help police.

So far, no arrests have been made. However, the evidence from the police report does raise the question as to whether or not the burglar or burglars were friends or acquaintances of Jackson’s.

Jackson, who signed a contract worth $51 million in 2012, isn’t the first athlete to have his home broken into, but this incident is a harsh reminder that millionaire athletes are often targets of people looking to make money at their expense.

Former Eagles linebacker and WIP radio host Garry Cobb said one of the first things that young players coming into the league are told at the NFL’s Rookie Symposium is that with more money can come new problems.

Some of Jackson’s neighbors have told reporters about the traffic coming in and out of Jackson’s home when the wide receiver is in town. Because police saw no forced entry according to the report, it’s easy to suspect that the burglar was someone who knew the layout of the house and where to find his valuables.

“That’s why you don’t have people rolling in and out of your house,” Cobb said. “You can’t keep track of everybody. You’ve got other people that talk to other people and tell them things that they see at your house. That’s dangerous.”

In some cases, that danger can be more direct than it was in Jackson’s case. Former NBA star Antoine Walker and the family of Washington Redskins safety Sean Taylor know that all too well.

Walker and two of his friends were robbed at gunpoint at his home in Chicago. The assailants came away with jewelry, cash and a car, but no one was hurt in the confrontation.

Taylor attended the birthday party of his half-sister Sascha Johnson and gave her a purse that contained a $10,000 cash gift.

One of Johnson’s party guests got the idea to rob the Redskins’ safety, and got five of his friends to help him. When the six men broke into Taylor’s Miami home with the intent of cleaning him out while he was away, they found the football player, who was there with his girlfriend and their daughter, who was 18-months-old at the time.

Taylor was shot to death. The trigger man, Ed Rivera, was convicted of second-degree murder in November.

Cobb said he hoped Jackson would use the break-in as a wake-call to remind him that he needs to put a limit on people who come in and out of his home.

“I hope he gets drastic with the changes he makes,” Cobb said. “He needs to greatly restrict the number of people he has coming into his house.”

ESPN.com contributed to this story