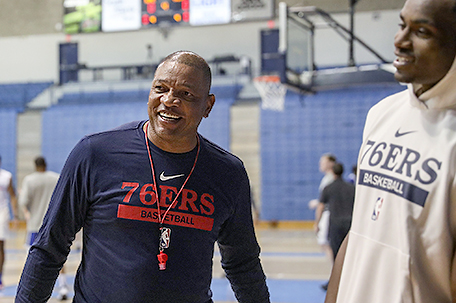 ABOVE PHOTO: Philadelphia 76ers head coach Doc Rivers speaks with Danuel House after practice on the first day of Philadelphia 76ers NBA basketball training camp at the McAlister Field House on the campus of The Citadel in Charleston, S.C. on Tuesday, Sept. 27, 2022. (Heather Khalifa/The Philadelphia Inquirer via AP)

CHARLESTON, S.C. — Doc Rivers is at ease using his platform as an NBA coach to fight bigotry and racial injustice, campaign for politicians he believes in and advocate for social change on themes ranging from poverty to police brutality.

Sometimes, his speeches sound like they were delivered by someone running for office. Might the 60-year-old Rivers, the son of a Chicago police officer, someday stump for change as an actual politician?

Rivers is fine with wading into political waters — and the older he gets and the more he learns about modern issues and Black history with deep meaning to him, the more he speaks out. At Donald Trump. At police misconduct. At the horrors of racism that have shadowed him his entire life. At the idea that, even as coach of the Philadelphia 76ers, it can still be hard to find his place as a Black man in America.

“When you hear, ‘America first,’ that scares me, because I’m a Black man and that’s not including me,” Rivers said last week in an interview with The Associated Press. “I want us to all be included. I want us all to function with each other.”

Rivers has become an agent of change in the NBA and found his voice as an activist, trying to contribute perhaps more to the league than he has already, first as an All-Star guard and then with a coaching career that includes the 2008 championship with Boston and a spot this year on the list of the 15 Greatest Coaches in NBA History. That outreach starts at home — or perhaps, on this point, on the road — where Rivers used training camp not just as the usual time to rehash X’s and O’s but as a daily history class. The Sixers practiced at The Citadel, the military college where tanks and jets and plaques dedicated to prisoners of wars dot the campus, an education all part of Rivers’ plan to squeeze more out of camp than basketball.

“All of it is good for us,” Rivers said.

The Sixers usually hold camp at their New Jersey complex, but Rivers wanted to strengthen team bonding with a road trip. The Sixers gathered last week for team dinners, played card and video games, and had serious conversations, the type of day-to-day activities largely shelved the last two seasons because of COVID-19 protocols.

“When you have camp at home, you don’t get that,” Rivers said. “They go home at the end of practice, and they don’t spend time with each other.”

Rivers was a guard with the Knicks in the early 1990s when the team held camp at the College of Charleston. Back then, coach Pat Riley made the players walk from the team hotel to the arena.

The 76ers stuck to the team bus last week.

Rivers and the Sixers organized field trips to the Old Slave Mart Museum, often staffed by individuals who trace their history to the enslaved people of Charleston, and to the Avery Institute of Afro-American History and Culture. Citadel President Gen. Glenn Walters and retired professor and historian Bernard Powers both spoke to the team.

“My people, my African people coming here, the people that gave up their lives for us to be able to be in this position, it was good to learn about all of that,” said center Joel Embiid, who was born in Cameroon and recently became a U.S. citizen.

Powers said by phone that he talked to the Sixers at their team hotel about such topics as the role Charleston played in the trans-Atlantic slave trade, the slave revolt of 1739 and the descendants of enslaved people known as Gullah, who live in small island communities scattered over 425 miles (684 kilometers) of the Southern Atlantic U.S. coast.

“This was the port where a greatly disproportionate number of Africans were brought here,” Powers said. “This place, more than any other, might be very likely a source of their ancestry. They could think about perhaps having a personal connection to this place.”

Rivers believed the experiences resonated with a team full of 20-somethings all the way up to coaching staff veterans.

“Teaching American history is under assault right now. And it’s not Black history or teaching about slavery, its American history,” Rivers said. “And so I was amazed. The first thing that I was taught the other day was, how many players, and not only players, coaches, came up to me and said, ‘Wow, I never was taught that in my history class.”

Rivers referenced learning about shameful historic chapters such as the Tulsa Race Massacre as an adult rather than learning about the white mobs in school as one reason he has pushed for more Black history to be taught in all schools.

“You should know your history. You really should,” Rivers said. “Could you imagine if we were not taught the history of Germany and the Holocaust? There really is no difference. I want to make sure we’re taught the same history.”

Before he took questions from reporters after Wednesday’s practice at The Citadel, Rivers addressed the death of a 14-year-old shot in the chest near a northwest Philadelphia high school athletic field. The shooting occurred hours after Mayor Jim Kenney signed an executive order banning guns and deadly weapons from the city’s indoor and outdoor recreation spaces including parks, basketball courts and pools.

Rivers, as he has in the past, urged for stricter laws on firearms.

“Obviously, if anybody knew the answer, we would try to find the answer there, you know, other than taking guns off the street,” Rivers told reporters. “But that’s too political. So, we’ve got to figure it out.”

Rivers mentioned a few times during his AP interview that he doesn’t want to get “too political” but matters of state matter to him. He was invited before the 2020 election to speak at a Joe Biden rally after the Democratic presidential candidate used Rivers’ words on the Jacob Blake police shooting in Kenosha, Wisconsin, in his own speech at Gettysburg, Pennsylvania, calling for racial unity. Rivers later decried the riotous Jan. 6 attack on the U.S. Capitol, though he said at the time that “democracy will prevail.”

“I didn’t used to be” political, Rivers said. “I’ve always been aware of politics; I’ve always been involved. But what got me involved is, we have this separation of race now, of pitting races against each other.”

Rivers serves on the board of the NBA Social Justice Coalition. The advocacy organization called members of Congress in support of an executive order designed to improve accountability in policing. Rivers was in Washington when Biden signed the order on the second anniversary of George Floyd’s death at the hands of Minneapolis police. The order was meant to reflect the challenges in addressing racism, excessive use of force and public safety when Congress is deadlocked on stronger measures.

“I think we need police reform,” Rivers said. “Our training has to be better. The thing that bothers me is that everyone should want that, including the police.”

The Sixers coach said today’s NBA players are more politically aware and involved in societal change than when he played in the 1980s and ’90s but he wanted more of the wealthy players, especially ones with millions of social media followers, to speak up on thorny current events. Rivers talked to the Sixers about the power of voting — the NBA this season scheduled no games on Nov. 8, which is Election Day — but won’t force his players to vote.

But he can make them listen.