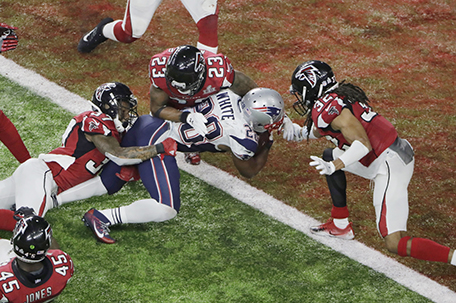 The Atlanta Falcons had the New England Patriots right where they wanted them during last Sunday’s Super Bowl.  Unfortunately, they didn’t keep them there.

When the Atlanta Falcons took to the field at Houston’s NRG Stadium to play the New England Patriots, they should have remembered the words of Omar Little, the drug dealer-robbing hit man from HBO’s iconic series “The Wire”.

In the episode “Lessons”, Stringer Bell sent Stinkum and Wee-Bey to kill Omar because, well, drug dealers don’t like it when you rob them. When Stinkum got out of the car and tried to sneak up on the hit man so prolific that his mere presence caused the streets to clear, he was met with blasts of gunfire, as was Wee-Bey, who managed to survive by hiding behind a car.

As he walked around looking for him, Omar gave Wee-Bey a piece of advice that the Falcons also should have heeded.

For three quarters, the Falcons had the King, the New England Patriots, in their sights. They were up 28-3. They had sacked Tom Brady a number of times and even had a pick-six to show for their efforts.

But they missed. And the Patriots walked away with the game in overtime.

Needless to say, the 2016 NFL season ended in stunning fashion when the New England Patriots overcame the largest deficit in Super Bowl history to come away with the overtime win over the Falcons. Brady led the Patriots to 31 unanswered points against a Falcons squad that thought they had the game won, passing for a Super Bowl-record 466 yards and winning his fifth Super Bowl ring and the MVP award for an unprecedented fourth time in the process.

For Brady, the win solidified the claim that he is one of the best quarterbacks, if not the best, in NFL history. While many might put an asterisk next to his name when he’s admitted to the NFL Hall of Fame due to the cheating allegations that seem to have surrounded him for much of his career, he’s hard to argue against.

It’s also hard to argue against the fact that most fans outside of New England were hoping that the Falcons would smash the Patriots like a bug. There’s a perception among many NFL fans that the Patriots are football’s evil empire. Combine that with the fact that Brady, Patriots head coach Bill Belichick, and owner Robert Kraft are all FODs (Friends of Donald’s) and you have a recipe for NFL fans using their social media presences to root lustily against you.

So when the Falcons made their epic collapse, it felt like Election Night all over again for a lot of people.

Meanwhile, the Falcons added to Atlanta’s reputation as “Choke-lanta”. In the 50 years that the city has had professional teams, there has been only one championship –the Braves’ win over the Cleveland Indians in the 1995 World Series.

What will probably bother Atlanta fans the most was that this game didn’t have to end the way it did. The Falcons should have taken care of business and knocked out the Patriots when they had the chance to do so.

For example, midway through the fourth quarter with the score 28-12, the Falcons had third and one from their own 36. Instead of using their running game to get that one yard and keep the clock moving, Falcons offensive coordinator Kyle Shanahan had quarterback Matt Ryan drop back to pass.

He not only got sacked, he fumbled the ball and the Patriots recovered.

Of course, Brady being Brady led the offense to the touchdown and two-point conversion that cut the lead to eight.

Still the Falcons had a chance to salt the game away when they moved the ball down to the New England 23 with a little over three minutes left.  After losing a yard on first down, Ryan, inexplicably, dropped back to pass and was sacked.

If I’m a Falcons fan, I would put the blame on Shanahan for some questionable play calling. If they ran the ball in this situation, the Falcons take time off the clock and are in position to kick a field goal that puts them up by two scores and gives the Patriots the ball with little time left.

Any self-respecting Philadelphia Eagles fan could tell you that.

Poor clock management and staying away from the running game in late game situations is something Eagles fans were familiar with during the Andy Reid years. During Super Bowl XXXIX against, you guessed it, the New England Patriots, it became a real issue.

On defense, the Eagles are going to need to strengthen their secondary, especially at the cornerback position. They’re also going to need some linebackers who can cover as well as attack the football. If the Birds should learn anything from watching the Falcons lose is that a combination of a good defense and a strong running game is what you need to win.

Especially if you’re coming for the King.