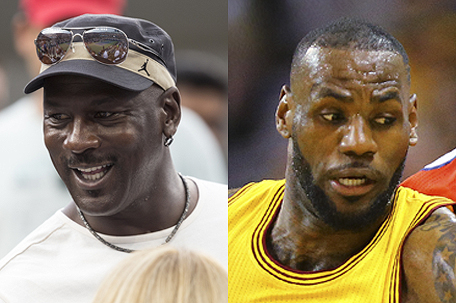 As the 2015 NBA Finals between the Cleveland Cavaliers and the Golden State Warriors continues this weekend, conversations at a sports bars, man caves and your local sports talk station will undoubtedly turn to the subject of LeBron James, his place among the NBA’s greats, and whether or not a series loss from the Cavaliers changes things.

But there’s one name that I’m tired of hearing as a part of that discussion.

Jordan vs. LeBron is one of those discussions that I try to avoid because it’s one that really makes no sense. It often disintegrates into a bizarre intergenerational fight between two cults of personality that has nothing to do with basketball.

Because James was seen as the  “NBA’s Golden Child,  “The Chosen One, the ”Messiah” or the “Son of Basketball” and a bunch of other goofy names when he came to the NBA, Jordan partisans show James no love despite his numerous accomplishments. To suggest that James’s name should be spoken in the same breath with their basketball immortal is heresy to them.

For example, Jordan partisans are always quick to point out that because James has only two rings to Jordan’s six, he will never be as great. Of course, Jordan didn’t play all five positions on the court to get those rings, but that logic always seems to get lost in these discussions.

(Now I could point out that if greatness is measured by NBA Championship rings, Jordan needs to bow down at the feet of Hall-of-Famer Bill Russell. Russell led the Boston Celtics to 11 NBA titles, something that neither James nor Jordan could ever accomplish. But did I mention that most of the folks having this particular argument have any knowledge of basketball history, and thus have never heard of Bill Russell?)

I was just on Facebook and someone posted a stat that compared Jordan and James scoring averages after the first 141 playoff games in their careers. Jordan had the better scoring average which reassured his followers.

Then someone posted Jordan’s and James record in the NBA Finals—which was …you guessed it advantage Jordan.  Of course, everything I’m saying I’ve seen LBJ parishioners do the same thing with their man coming out on top.

To be honest, I don’t care either way. But the comparisons between the two are totally and utterly ridiculous, especially considering that they play different positions and have their own unique qualities that make them great players.

Jordan was a great clutch scorer who made his teammates better and played defense. James is a versatile player who can score, rebound and share the ball. He’s taken three different teams to the NBA Finals and has made other guys around him even better by his leadership and will to win.

Both James and Jordan were the best of their time.

So do me a favor okay?

How about letting the LeBron James Era unfold the same way?