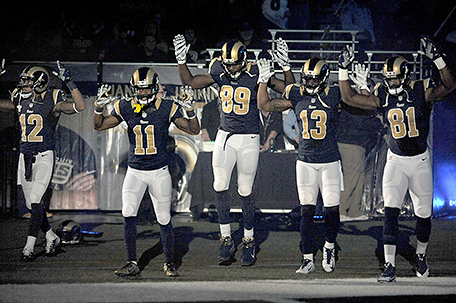 ABOVE PHOTO: In this Sunday Nov. 30, 2014, file photo, St. Louis Rams players, from left; Stedman Bailey (12), Tavon Austin (11), Jared Cook, (89) Chris Givens (13) and Kenny Britt (81) raise their arms in awareness of the events in Ferguson, Mo.,  as they walk onto the field during introductions before an NFL football game against the Oakland Raiders in St. Louis. Time will tell whether the “hands-up” gesture during pregame introductions will leave a lasting memory or simply go down as a come-and-go moment in the age of the 24-hour news cycle. Either way, it certainly isn’t the first time high-profile athletes have used their platform to make political statements. (AP Photo/L.G. Patterson, File)

When I look back on 2014, I’ll remember it as a year where sports and social justice issues intersected and African American athletes refused to “just shut up and play.”

From challenging outdated stereotypes regarding sexual orientation to throwing a spotlight on issues such as police brutality and racism, Black athletes decided that their membership in the Black Community was more important than endorsement deals or anything else designed to induce their silence.

The failure of Grand Juries in Ferguson, Missouri and New York City to indict police officers in the deaths of Michael Brown and Eric Garner, and the deaths of Tamir Rice, John Crawford and Akai Gurley sparked protests against police brutality coast-to-coast.

But the athletes’ protest didn’t come without pushback. When members of the St. Louis Rams came out for a game with their hands up days after the Grand Jury decision in Ferguson was announced, the police union in St. Louis demanded an apology (and suspensions from the NFL) from the players, a tactic also employed by Cleveland’s police union for the “I Can’t Breathe” shirt worn by Bademosi and a shirt calling for justice for Tamir Rice  John Crawford worn by Browns wide receiver Andrew Hankins. Rather than righteous indignation, the police union’s moves looked more like intimidation.

Of course, more than a few more sports talk pundits and conservative talk radio hosts came out in an unveiled assault of bigotry  against the football players.

To their credit, the players and the League refused to bow to the demands of the police unions and loud-mouth conservative talking heads. Police officers, whose salaries are paid by our taxes, are not above the law.

Bryant reminded those who tried to shout the athletes down that they live in the United States of America:

“The beauty of our country lies in its democracy. I think if we ever lose the courage to be able to speak up for things that we believe in, I really think we really lose the value that our country stands for.”

Tommie Smith, John Carlos, Muhammad Ali and Vera Caslavska, the Czech gymnast who protested the 1968 Soviet invasion of Czechoslovakia by turning away from the Soviet flag during the medal ceremony—can definitely understand what today’s athletes are experiencing.

It wasn’t so much that former University of Missouri star Michael Sam announced to the world that he was gay prior to the NFL Draft, it was the long kiss he gave to his lover Vito Commissano on hearing the news he was drafted by the St. Louis Rams that threw the social media world into a frenzy.

Most of the vitriol centered on the perception that Sam was trying to impose his “gay lifestyle” upon us heterosexual folks. But while Sam ended up getting cut from the Rams and releases by the Dallas Cowboys practice squad, his presence reminded us that, in the words of gay rights activists, gay athletes are “here, they’re queer…”

And society needs to get used to it…because it’s difference that makes us stronger.

The NBA was a hotbed of social justice action in 2014.

Los Angeles Clippers owner Donald Sterling found himself in hot water when a recording of a conversation he had with his bi-racial girlfriend V. Stiviano hit the TMZ airwaves.

In this conversation Sterling, who was hit with a record-breaking fine by the federal Department of Housing and Urban Development for housing discrimination based on race in the late 90s, chastised Stiviano for bringing Black people to Clippers games and for taking an Instagram photo with NBA Hall-of-Famer and owner of the Los Angeles Dodgers, Magic Johnson.

Once the tape hit the streets, Clippers players including All-Stars Chris Paul and Blake Griffin held a 45 minute meeting to discuss a response prior to the team’s playoff game against the Golden State Warriors that night. Although there was talk of the Clippers boycotting the game to get back at Sterling, the players opted to protest by removing their warm-up shirts and leaving them at center court and wearing black arm or wrist bands and black socks instead, something that players from the Houston Rockets and the Portland Trailblazers also did to show solidarity.

It was the first real test of new NBA Commissioner Adam Silver’s leadership. When he banned Sterling from the league for life and forced him to sell the team, everyone agreed Silver had passed it.

But Sterling got $2 billion out of the deal, so you’ll have to forgive me for thinking that in this case racism, like crime, paid.

When “You Throw Like a Girl” Became a Compliment

Thanks to pitcher Mo’Ne Davis of South Philly’s Taney Dragons, 2014 became the year we all wanted to “throw like a girl”.

The 13-year-old with the 70-mile per hour fastball led the Dragons to the Little League World Series, a first for a Philadelphia team. Mo’Ne also became the first girl to pitch a shutout in a LLWS game, and scored the cover of Sports Illustrated, threw wiffle balls at Jimmy Fallon with battery mate Scott Bandura and met one of her idols, Dodgers pitcher Clayton Kershaw.

Although the Dragons finished 2-2 during their trip to Williamsport, they, and the Jackie Robinson West team from Chicago that went on to become U.S. Champions, served notice that city-based baseball was back, that kids of color knew how to play…