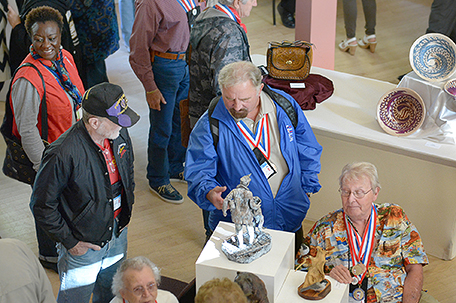 Where words fail, the creative arts have the ability to speak. Art therapy is an empowering technique that allows for self-discovery and has the power to produce insight and expression in a non-threatening way. That is why the United States Department of Veterans Affairs (VA) encourages creative arts as a therapeutic, and often lifesaving, tool for returning soldiers.

This year, the American Legion Auxiliary (ALA) will partner with the VA for the 16th consecutive year to co-present the National Veterans Creative Arts Festival (NVCAF). The weeklong event is attended by 120 talented, gold medal-winning veterans from across the country. Many have participated in creative arts therapy at their local VA hospitals and were recommended to compete in their local veterans creative arts festivals to nurture their talents.

This year’s national festival will be held in Jackson, Mississippi. Previous participants speak highly of the week of performance, healing and awareness. William Gura a visual artist and first-place winner in previous local festivals states, “It’s the history and the stories of the people that makes the program so impactful. The expressions are about what we’ve seen and experienced. They give us these works of art that only a veteran can create.”

Veterans from war eras spanning Vietnam, Iraq and Afghanistan gather together to cultivate and eventually exhibit their talents in painting, music, writing, dance and other areas. ALA member Elizabeth Mackey, director of the National Veterans Creative Arts Competition and Festival and former VA music therapist, says the festival is a window into the veterans’ experience as active military personnel.

“When you view a performance or gaze at a painting, you don’t just see the artist, you come to understand who these veterans are, where they came from, what they are battling and where they are going. It has been my privilege to learn from them time and time again.”

Creative Arts therapy encourages expression and memory recall. It can be used in physical rehabilitation to regain damaged motor skills, or as a cognitive therapy to encourage emotional sharing. Often conducted in a group setting, creative arts therapy is used as a way to show patients that they are not alone and reinforce the benefits of their treatment plan.

The ALA began to sponsor the NVCAF in 2000, but the relationship has grown and ALA now co-presents the festival. ALA members devote more than 25 million dollars’ worth of volunteer hours to the festival annually. Their roles vary from assisting veterans with art projects and erecting displays, funding travel and support, to supporting publicity, productions and materials development. In recognition of its dedication to healing veterans through art, the American Legion Auxiliary was honored by the Americans for the Arts in 2014.

Peggy Thomas has volunteered more than 800 hours to the festival. She says art therapy is the process of healing and a glimpse inside the struggle of the artist veteran who has been silent. “The festival shines a light on innovative work in order to give back to people who have given so much to us.”

For information on participating in the event or volunteering, visit: http://www.va.gov/opa/speceven/caf/index.asp