The ins and outs of mask etiquette: What to say in awkward situations — at get-togethers, in public or at work 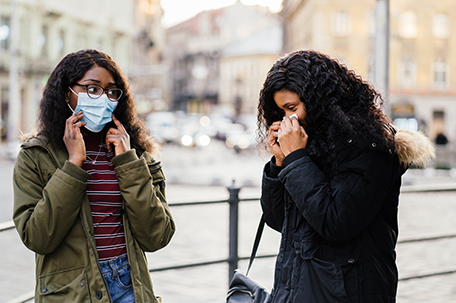 Wearing a mask in public may be the new normal, but it can sure lead to a variety of awkward moments — for instance, how to get across, say, that that mask needs to go over your nose, too?

And while science shows that masks are one very important tool in the fight against COVID-19, let’s just say the social norms involved are still … evolving. To help sort through some typical rough spots, we tapped etiquette experts for advice.

Whether it’s a wedding for 30 guests or a backyard barbecue, the best move is to establish the rules of the road ahead of time. That means, when you’re inviting guests, spell out your expectations for when and where masks should be worn (think: On arrival, but not when seated outside? Throughout the event without exceptions? For any inside visits only?).

Granted, you’ll have to deal with the responses — which recent hosts we interviewed described as everything from “surprisingly confrontational” (when asking a guest to put on her mask when heading inside to the bathroom) to “a conversation that happened naturally” (while arranging dinner on the porch for close friends).

Jessie Newburn, 57, says that she was surprised at the categorical “no” she received from a friend she’d asked to wear a mask to an outdoor get-together. Working around her friend’s refusal, Newburn suggested they instead meet up in a park where they could catch up comfortably, six feet apart. The friend showed up — wearing a mask.

In your role as host, etiquette experts say, it’s also your job to make sure your guests follow the rules during any event. If they don’t, you should remind them to do so, without assuming the worst (that they don’t care about your or others’ well-being).

“It’s all in your tone of voice,” says Diane Gottsman, an etiquette expert and owner of the Protocol School of Texas, who recommends saying something along the lines of, “I’m so glad you were able to come. I’m making sure everyone wears a mask to keep us safe and comfortable.” Then, offer the guest a disposable mask from your own supply (and yes, be sure to have those extras handy).

If your host doesn’t bring up the topic of mask-wearing before you arrive, then by all means broach the subject yourself. If you don’t feel comfortable with what you hear, beg off with a polite, “I really appreciate the invitation. But I’m staying close to home for now.”

“You’ll feel better about yourself for not compromising your own boundaries,” Gottsman says.

If you forget to ask, you can ask in the moment. Michael Durand, 73, and his wife, Marlene Zarfes, 64, of New Rochelle, New York, wore masks to a recent backyard dinner with friends. But after they settled into their seats outside, safely six feet from the other couple, Durand asked whether anyone would mind if he removed his face covering. His hosts gave him their blessing and the group remained without masks while seated.

If they said they preferred we keep our masks on, I would have agreed,” he says. “The key here is to be respectful of everyone’s concerns and respect the science.”

So what if you arrive at a party where others aren’t complying with the given rules? Your next step depends on how well acquainted you are. It’s fine to approach those you know well directly, gently pointing out their lack of a mask. For guests you’ve only just met, take the host aside and ask for help. But if you don’t feel comfortable at any point, “It’s absolutely OK to leave,” says Daniel Post Senning, an etiquette expert at the Emily Post Institute.

As for your goodbyes, keep them short and to the point, Senning says. As in: “Thanks for having us. We’re leaving a bit early because we’re taking masks and social distancing guidelines very seriously.”

The rules are different when you’re out and about in public and concerns arise. Though your first impulse may be to speak up, experts say don’t engage. You don’t know how strangers will react to something like a request to actually put on the mask dangling around their neck. What’s more, speaking up is not necessarily your responsibility, says Senning. “You have to take control over what you can control,” he says, “and the thing you have the most control over is your own behavior, not the behavior of others.”

If you feel you must say something for health reasons, do so in a way that doesn’t assume bad intentions on the stranger’s part. Take Laurie Weingart, 57. During a recent drive back to Pittsburgh from Atlanta with her twentysomething daughter, they stopped at a fast-food restaurant. They were both taken aback when the server behind the counter had on a mask — perched under her nose. When Weingart asked the woman to adjust the face covering, the server explained that it was too loose and wouldn’t stay up, even providing a demonstration.

Weingart ended up putting in an order and leaving as quickly as she could. Her daughter, who is a public health researcher, immediately left the restaurant. “Her area of specialty informed her response,” Weingart says.

On the job, speaking up depends on whose behavior you’re concerned about. But before you say anything to anyone, be clear about your workplace’s policy requiring masks.

From there, if a colleague isn’t wearing a mask in an area where one is mandated, you can directly ask him or her to follow the rules and put one on. With your boss, however, you may need to be more careful with your wording, says Jessica Lieffring, an etiquette expert and founder of the consulting and training firm The Polite Society.

Lieffring recommends saying something that emphasizes the reason for your concern, like, “I’d really feel more comfortable if you would wear a mask. I’m at a higher risk of having complications should I get this virus and need to be extra careful.” If you’re uncomfortable doing so, you could also ask your human resources department for help with the situation.

Impress your guests with holiday etiquette 101

Coughing? Bring a healthy dose of sick-etiquette to work