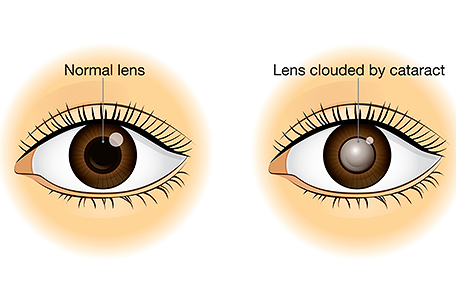 You may know that cataracts can interfere with your ability to see clearly, but might be unaware of their impact on your emotions. Alcon, the global leader in eye care, conducted a survey of about 1,300 people age 60 and older who have undergone cataract surgery and found that almost 60 percent of respondents said cataracts made them feel annoyed, frustrated or old. Also, many respondents said that the condition makes some daily activities harder.

If cataracts are impacting your ability to perform your usual day-to-day activities, and clouding the richness and detail of life, there’s good news. Cataract surgery is common, effective and not only can improve your vision, but many patients report emotional benefits and some positive impact on their lifestyles. What’s more, 93 percent of those surveyed say they would recommend cataract surgery to someone considering the procedure.

“Cataracts impair more than just vision, they can interfere with a patient’s lifestyle and emotions,” says Dr. Lawrence Woodard, ophthalmologist and medical director of Omni Eye Services of Atlanta, Georgia. “Surgery can make a significant difference, allowing people to see more clearly and get back to doing the things they love. Many of my post-surgery patients report how happy they are to get back to their life.”

Cataracts, or clouding that occurs in the eye’s naturally clear lens, are one of the most common types of eye conditions associated with aging and one of the leading causes of age-related vision impairment in the U.S., according to the National Eye Institute (NEI). They can’t be prevented and occur naturally over time, causing the clear lens in your eye to become cloudy from the buildup of proteins. As the lens becomes cloudier, less light can pass through it into your eye and your vision becomes blurred. People with cataracts may also have trouble seeing at night, or experience sensitivity to light and glare. They may see “halos” around lights, have double vision, or feel that colors look faded.

Cataracts affect more than 24.4 million Americans age 40 and older, according to Prevent Blindness America. By 2050, that number will more than double to about 50 million, the NEI projects. While nearly everyone who lives long enough will eventually develop cataracts to some extent, certain groups are at greater risk. In fact, according to a study by the NEI, African Americans are twice as likely to develop early onset cataracts due to certain medical conditions, such as diabetes. Additionally, cataracts are the leading cause of visual impairment among Hispanics, according to a study by University of Arizona researchers.

Beyond the common symptoms of cataracts, many people affected also have difficulty with some day-to-day activities. Nearly two-in-three respondents (64 percent) report that cataracts impacted their lives before surgery, such as making it difficult to work, see colors, drive and watch TV and movies. For many, undergoing surgery brought into focus the true impact cataracts had on their lives. Nearly 40 percent of respondents say they didn’t realize just how much they were missing, or didn’t truly realize the emotional impacts of cataracts until after they had surgery. For example, more than 65 percent of people surveyed reported being surprised by the brightness and vividness of colors following surgery.

Since cataracts are very common, many people who develop them may also have existing conditions that are already affecting their vision, such as astigmatism. This common condition is caused by a slight difference in the curvature of the eye’s surface, resulting in blurred vision. According to the NEI, it is most often treated with corrective glasses or contact lenses. What many people with cataracts don’t realize is that there are treatment options available that can correct both conditions in one procedure.

“Patients may not be aware that there are two-in-one treatment options that can fix both cataracts and astigmatism at the same time,” says Woodard. “By treating both conditions, they could potentially find themselves free of the glasses for distance they’ve worn their whole lives. If you’re considering cataract surgery, it’s important to talk to your eye doctor to decide what treatment option is best for you.”

Dr. Woodard is a paid consultant for Alcon. Patient “John Brown” received modest compensation from Alcon for talking about his actual experience.

How Medicare covers your eyes

Stop glaucoma from taking your sight