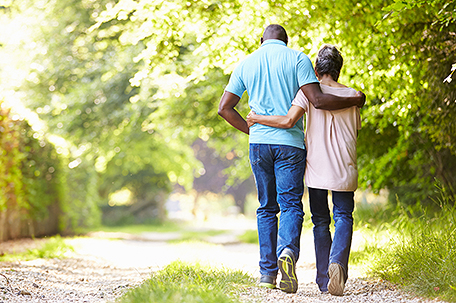 If you haven’t noticed — from the parade huffing by your suburban window every morning or the crowds you encounter at the nearby nature path — walking is big right now. The Rails to Trails conservancy charts a nearly 200 percent increase in trail use since last year; businesses are instituting “walking meetings”; and Anthony Fauci, M.D., the government coronavirus expert who’s about to turn 80, says he manages to fit in a 3 1/2-mile power walk daily.

This burst of cardiovascular activity has undisputed health benefits for many. But don’t be disappointed if you break out your fitness tracker to discover that you still haven’t hit the holy grail of fitness walkers, the 10,000-step-per-day baseline. It turns out — and this is the really good news — that you may not even need to.

In a 2017 Stanford University study that ranked 46 countries according to the average number of steps taken per day in each, the U.S. was 30th. But while actually taking steps may not be our thing, counting them is another story. Roughly 1 in 5 Americans wear a smartwatch or fitness tracker on a regular basis, according to a 2019 Pew Research Center survey. The rise of these devices, many of which use a 10,000-step goal as a baseline, subtly changed walking from a leisurely activity to a potentially competitive one and popularized step counting as a national pastime.

But lately that nice, round number, the equivalent of around five miles, has been the subject of scientific scrutiny, with good reason. “It likely originated as a marketing tool,” says I-Min Lee, M.D., a professor of medicine at Harvard Medical School. “In 1965, the Yamasa Clock and Instrument Company in Japan sold a pedometer called Manpo-kei,” she says, which translates to “10,000-step meter.” The number caught on and has been used ever since — but without scientific basis, as studies, including one Lee coauthored in 2019, have shown.

“For many older people, 10,000 steps per day can be a very daunting goal,” Lee says. “We wanted to investigate whether this was necessary for lower mortality rates in older women.” When Lee and her collaborators tracked the movements of 16,741 women, ages 62 to 101, they found that as the average number of steps taken per day increased, the risk of mortality decreased. But the effect peaked at around 7,500 steps. So while taking more steps definitely won’t hurt, it does seem to be a case of diminishing returns.

Another somewhat surprising finding was that a slow pace can be just as effective as a higher one. This was confirmed by a study published this year in the Journal of the American Medical Association (JAMA). It found that walking at a rate of 50 steps per minute, on par with a slow stroll, was just as effective as faster paces. The overall number of steps taken was more important than how quickly anyone took them, says Pedro F. Saint-Maurice, a postdoctoral fellow at the National Cancer Institute, the study’s lead author.

The JAMA study was one of the first to look at walking in terms of steps taken versus how long you spent doing the activity. “We know how many minutes of exercise people should be doing for health benefits, but, surprisingly, we don’t know much about step count,” Saint-Maurice says. The difference may seem small, but it can be significant

Michele Stanten, a walking coach and certified fitness instructor, points out that counting steps has the advantage of guarding against too much sitting throughout the day. “Some people might get their 30 minutes of walking in, but then be more sedentary the rest of the day,” she notes. Doing so can also be motivating, since you get credit for all the routine things you do that don’t feel like exercise — walking to your car, or taking the stairs. “One of the appeals of counting steps is that it easily adds up all of the little bouts of walking that we’ve been encouraging people to do,” she says.

And research supports the idea that exercise doesn’t have to happen all at once to be effective. In fact, the latest physical activity guidelines did away with the recommendation that an activity had to be done for at least 10 minutes to count toward the recommended 150 minutes of moderate exercise.

Though you may not need a full 10,000 a day, counting steps does have advantages. “Tracking steps is a great way to quantify and see your progress, which can motivate you to do more,” Stanten says. Start by getting a baseline step count. Go about your day as usual for at least two weekdays and one weekend day, and average your steps. Then aim to get an extra 1,000 to 2,000 steps above that number. After a week or two, add another 1,000 to 2,000 steps.

The most important thing, especially as we get older, is to be consistent, Stanten says. “You’ll feel better and get more benefits if you do something most, if not all, days of the week,” she says, noting that skipping a weekend can lead to soreness when you start again. “Even if you don’t hit the goal every day, you’re moving.”

Save 25% when you join AARP and enroll in Automatic Renewal for first year. Get instant access to discounts, programs, services, and the information you need to benefit every area of your life.

To see health and fitness benefits even faster, you can try alternating low- and high-intensity movement, says Sabrena Jo, director of science and research content for the American Council on Exercise. Begin walking at a regular leisurely pace; then push yourself to walk faster and pump your arms for 20 seconds. Go back to your initial pace for a minute, then repeat for the duration of your walk. Doing so, she says, “pushes you to increase heart rate and breathing, but does so in small enough intervals that you can stave off fatigue because you get to recover and rest in between.” What’s more, she says, “some people find that way more enjoyable than just trying to push yourself really hard for 20 minutes straight.”

Another way to maximize the benefits of walking is to get outside as much as possible. Research has found that regular walks outdoors can do everything from improving short-term recall to helping you sleep better. One study found that spending just 20 minutes a day walking in nature slashed levels of stress hormones by 10 percent — something that can be especially helpful for anyone these days.ensity activity you should get weekly. “Now,” says Stanten, “every minute — or every step — counts.”

Keeping fit and having fun as we age