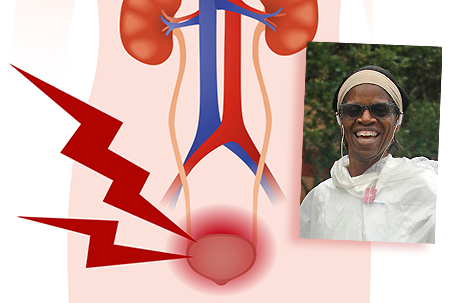 Sixty is a milestone for Carolyn Hampton and she’s not shy about sharing her age because it’s a tribute to how she’s lived. She’s more active than ever, loves to dance and has even taken up tennis and running. None of this would have been possible a few years back because of her constant concern about having an accident. Hampton’s in charge now, but for years her bladder ran the show.

Hampton is not alone – 37 million people in the United States suffer from overactive bladder (OAB) – it’s more common than diabetes or asthma. OAB is an ongoing condition that may include having to go to the bathroom frequently, having to use the bathroom urgently and leaking urine. While not life threatening, OAB can negatively affect social activities, exercise and sleep.

After years of not getting full relief with medications and suffering with the side effects, Hampton was unable to function because she woke every 45 minutes to use the bathroom. “My quality of life was terrible, but I’m a fighter and a two-time cancer survivor, so I wasn’t going to let my bladder limit me,” Hampton says. “I finally said, ‘Enough,’ and asked my primary care doctor what else she had for me and was sent to a urologist.”

“Your quality of life is so much better when the bathroom doesn’t have to be your number one priority. It’s so freeing. People shouldn’t be afraid to talk about their symptoms or ask for a referral if they aren’t finding relief. It’s critical to advocate for yourself,” Hampton says.

OAB is thought to be caused by miscommunication between the bladder and brain. Hampton was ultimately prescribed an advanced therapy that worked for her by helping to address this miscommunication.

Similar to the breakdown in communication between the brain and bladder; there is often a communication gap between people dealing with OAB and physicians about its impact. Many suffers aren’t comfortable bringing it up and physicians don’t often ask about bladder health.

To bridge this gap, the National Association For Continence (NAFC) launched a new tool help people get a clear idea of their symptoms and the impact so they can better communicate these concerns to their doctor. It also can help people find a local incontinence expert who can work to restore their bladder function.

“There are many effective OAB treatments, yet the majority of those suffering are untreated. Our goal is to help people discover the right option for them, but the first step is communication,” says Steven Gregg, Ph.D., executive director of the NAFC. “The better your health care provider understands the impact of your symptoms, the better they can help find an effective treatment.”

Only one in eight Americans who have experienced loss of bladder control have been diagnosed and less than 33 percent of people with incontinence and OAB symptoms seek treatment. Many sufferers revolve their lives around their bladder, but often don’t realize how much they are doing to cope – mapping bathrooms, refraining from drinking, wearing dark clothing and avoiding socializing.

In a recent NAFC survey of 356 people experiencing bladder control issues, 66 percent of respondents said their urination issues affected their sleep. More than 50 percent also reported a loss of confidence. The survey results also showed bladder control issues had a serious impact on other important areas including travel, intimacy, and ability to be active.

Among women who have not discussed OAB with a physician, embarrassment was a top reason cited, in addition to fear of being told it’s a natural part of aging and thinking nothing can be done.

While many advanced therapies are available, less than five percent of respondents have ever heard of them. It’s critical that patients find an incontinence expert to help find the right solution for them.

“I’m thrilled that my doctor listened to me and helped me find an effective solution. It took courage to open up about what has been a ‘hush-hush’ issue, but the freedom it gave me means so much to me,” says Hampton.

Visit www.everydayfreedom.com/nafc to take the bladder control quiz, learn how to talk to your health care provider and find an incontinence expert in your area.

Overactive bladder? What you should know if you always ‘gotta go’

Overactive bladder? What you should know if you always ‘gotta go’