New AARP poll: Women age 50 and over are energized to vote in November, but half are still weighing their options 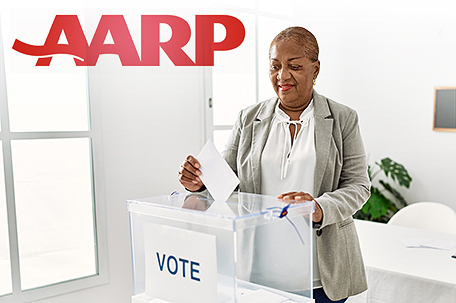 WASHINGTON — Less than 40 days before the midterm elections, an overwhelming majority of women voters aged 50 and over said they are certain to vote this November (94%), however half (51%) of this swing voter group said they have still not decided which candidates to support, according to a new AARP poll released today. Among these voters in a generic congressional ballot, Republican and Democrat candidates are tied.

Latinas and Asian American and Pacific Islander (AAPI) women voters 50 and over are more undecided on who they will vote for, with 77% of Latinas and 68% of AAPI women saying they have not made up their minds, according to the research conducted in partnership with pollsters Celinda Lake, Christine Matthews, Kristen Soltis Anderson, and Margie Omero.

“As the largest bloc of swing voters heading into the midterms, women voters 50+ can make the difference in 2022 and decide the balance of power in Congress and statehouses across the country,” said Nancy LeaMond, AARP’s executive vice president and chief advocacy and engagement officer.

Women voters 50 and over are unified in their support for protecting Social Security from cuts, with three-quarters saying that this would personally help them a lot. Half of these voters think the economy is not working for them. Additional key economic findings show:

Two-thirds (66%) of women age 50 and over report cutting down on non-essential purchases, 4 in 10 (41%) have cut back on essentials and 40% are saving less as ways to handle increased costs of living.

Over 80% of women voters rate their motivation to vote at a 10 on a 0-10 scale, with economic and social issues being top of mind:

Independent women aged 50 and over rank division in the country (46%), voting rights (43%), threats to democracy (42%), and inflation and rising prices (41%) as their biggest concerns.

The survey also found that older women are unimpressed with the job elected officials have done on “understanding the everyday challenges of people like me,” with three-quarters (75%) saying they have done just a fair (32%) or poor (43%) job.

Women aged 50 and over are one of the largest, most reliable group of voters. According to voter file and Census Bureau data, they make up a little more than one-quarter (27%) of registered voters and cast nearly a third (30%) of all ballots in both the 2020 and 2018 elections.  In 2020, 83% of registered women voters in this age group turned out, and in 2018, the last mid-term election, they were 15% more likely to vote than the population at large.

“The biggest bloc of swing voters for both parties is women over 50 who are still undecided, frustrated that candidates are not in touch with their lives, and looking to hear that elected officials will protect social security from cuts,” said Celinda Lake, founder and president, Lake Research Partners.

“Increasingly, it isn’t just that voters of different parties want different solutions to problems – they don’t even agree on what the biggest problem is. But a few issues, like concerns about political division and the future of Social Security and Medicare, do cross party lines with women over 50,” said Kristin Soltis Anderson, founding partner, Echelon Insights.

“Neither party can say they have “won” the votes of women over 50 yet. Older women are evenly divided on the generic ballot and two-in-five say they will make their final decision in the remaining weeks. They will be watching messaging on Social Security, and many will be focused on threats to democracy and gun violence, while others will more closely track inflation and rising prices,” said Christine Matthews, president, Bellwether Research.

“Social Security may be a consensus issue with women 50+, yet among Democrats, threats to democracy and voting rights are very much top tier. And across all groups of women 50+, “jobs” are bottom tier. That’s not surprising given not many women have said they have gone back to work or taken on extra shifts in order to make ends meet,” said Margie Omero, principal at GBAO.