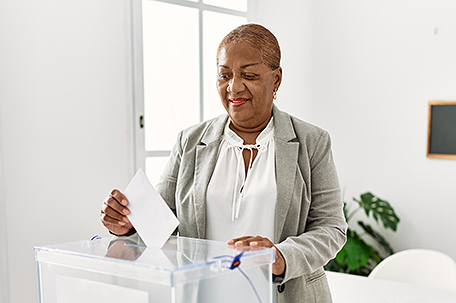 WASHINGTON — AARP recently released the findings of a poll of likely voters from the 56 most competitive congressional districts for 2022. The survey found a generic Republican candidate with a four-point advantage over the generic Democratic candidate and that voters aged 50 and over make up over 60% of likely voters in these districts and will likely play a key role in deciding the outcome of the midterm elections. The districts included in the survey are rated either a “toss-up” or “lean Democrat/Republican” by the Cook Political Report.

“Americans aged 50 and over are our nation’s most powerful voters – and they will be the deciders in the 2022 midterm elections. Voters 50+ are focused on inflation and pocketbook issues,” said Nancy LeaMond, AARP executive vice president and chief advocacy and engagement officer. “Candidates should pay close attention to their concerns and Congress can start by passing legislation that lowers prescription drug prices and makes health care more affordable for families.”

The survey indicates that candidates should pay close attention to voters 50+, with a significant majority (80%) saying they are extremely motivated to vote this fall. Voters 50+ are a crucial voting bloc, consistently showing up to the polls and making a key difference in election outcomes. In the 2018 mid-term elections, the 50+ made up about 60% of the electorate and they are poised to make up an even larger share of in 2022, given their greater to motivation to vote than those under 50.

Inflation and rising prices are the top concern for likely voters 18+ and 50+. Social Security, retirement savings, Medicare, the cost of prescription drugs and long-term care are also important to both voters 18+ and 50+, but particularly important to older voters, regardless of political party. A significant majority (87%) of voters are more likely to vote for someone who allows Medicare to negotiate lower prescription drug prices, including 84% of Independents and 82% of Republicans.

Voters in these key House districts are very pessimistic about the direction of the country, with only 14% saying it is headed in the right direction.

Undecided voters 50+, who make up 11% of respondents, are most focused on economic issues for their vote, and very positive toward candidates who prioritize issues protecting older adults, such as protecting Social Security (88% more likely to vote for the candidate)) and Medicare (89%) from cuts.

There is significant concern among voters 50+ of all partisan stripes that both Social Security and Medicare will not be there when they need it.

AARP commissioned the bipartisan polling team of Fabrizio Ward & Impact Research to conduct a survey. The firms interviewed 2,352 likely voters in the 56 US House districts that Cook Political Report rated as “Lean” or “Toss Up” as of June 29, 2022.