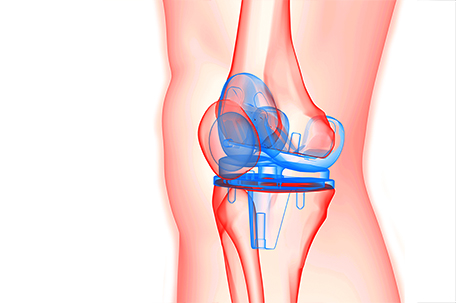 Total Knee Arthroplasty (TKA), often referred to as knee replacement surgery, can sound like an intimidating and worrisome procedure, especially for those who aren’t familiar with advances in knee replacement implants. Knee replacement surgery is a viable option because it can help alleviate pain and improve mobility by replacing damaged bone. Many patients discover they are able to get their mobility back after surgery and return to doing the things they love.

According to the Centers for Disease Control and Prevention, about 43.5 percent of adults with doctor-diagnosed arthritis have limitations in their usual activities due to their arthritis. Osteoarthritis is the most common form of arthritis. Knee replacement surgery is a common approach to treating osteoarthritis of the knee – a disease where cartilage covering the bones wears down over time, leaving them to rub against each other and causing pain and reduced motion.

Even though TKA is a common procedure performed more than 600,000 times each year in the U.S. alone, many have misconceptions about knee replacement surgery. Two of the most common fears people express are how painful the procedure and recovery will be, and whether they will regain their mobility afterward.

In part, advancements in knee replacement implants such as the ATTUNE® Knee from DePuy Synthes can help alleviate some of these concerns. Because it was designed to work in harmony with a patient’s knee muscles and ligaments, the ATTUNE Knee can help increase stability and reduce pain, thereby helping patients get back to living life and pursuing passions sooner.

“I’ve been using the ATTUNE Knee in my practice for about three years,” said Dr. Sarkis Bedikian, orthopaedic surgeon, MidAmerica Orthopaedics. “With the improvements in technology that the ATTUNE Knee delivers, my patients have had less pain and swelling after surgery, allowing them to recover quicker so they can get back to life quicker.”

Just as important as the choice of implant, is a focused rehabilitation protocol. “I tell my patients to expect pain after surgery. They know that they need to listen to their physical therapist and work hard at rehab,” said Dr. Bedikian. “The benefit I have seen with the ATTUNE Knee is that the rehab activities that used to take my patients three months, now take about six weeks.”

In fact, in a clinical study, physical therapists noted that ATTUNE Knee patients had significantly greater range of motion than other knee replacement patients, both at two and six weeks post-surgery5.

“Before surgery simple tasks like sleeping, visiting friends, and even using the restroom are difficult and significantly impact quality of life,” said Dr. Bedikian. “After surgery, it’s rewarding when my patients tell me they are happy and are able to get back to their activities with less or no pain.”

Choosing the right knee replacement is an essential part in helping patients get back to the activities they love sooner.

It is important to know that the performance of knee replacements depends on age, weight, activity level and other factors. There are potential risks and recovery takes time. People with conditions limiting rehabilitation should not have these surgeries. Only an orthopedic surgeon can determine if knee replacement is necessary based on an individual patient’s condition.

Knee replacement surgery is not always the answer, but for those wishing to learn more, www.ATTUNEknee.com has resources to learn about TKAs and hear from patients who have faced similar situations.

Clatworthy, M. (2015). An Early Outcome Study of the ATTUNE® Knee System vs. the SIGMA® CR150 Knee System. DePuy Synthes Companies White Paper. DSUS/JRC/0814/0418 (1). In an IRB approved early outcomes study, physiotherapists collected data on 40 patients implanted with ATTUNE® Knees and 40 patients with SIGMA® CR150 knees. The results demonstrated that patients implanted with the ATTUNE Knee had statistically signicant improvements in some early outcomes, other outcomes demonstrated a trend favoring the ATTUNE Knee, and some outcomes were equivalent.

New relief for knee pain may be on the horizon

Three activities to help you move safely after knee surgery